The Midnight After (film review) 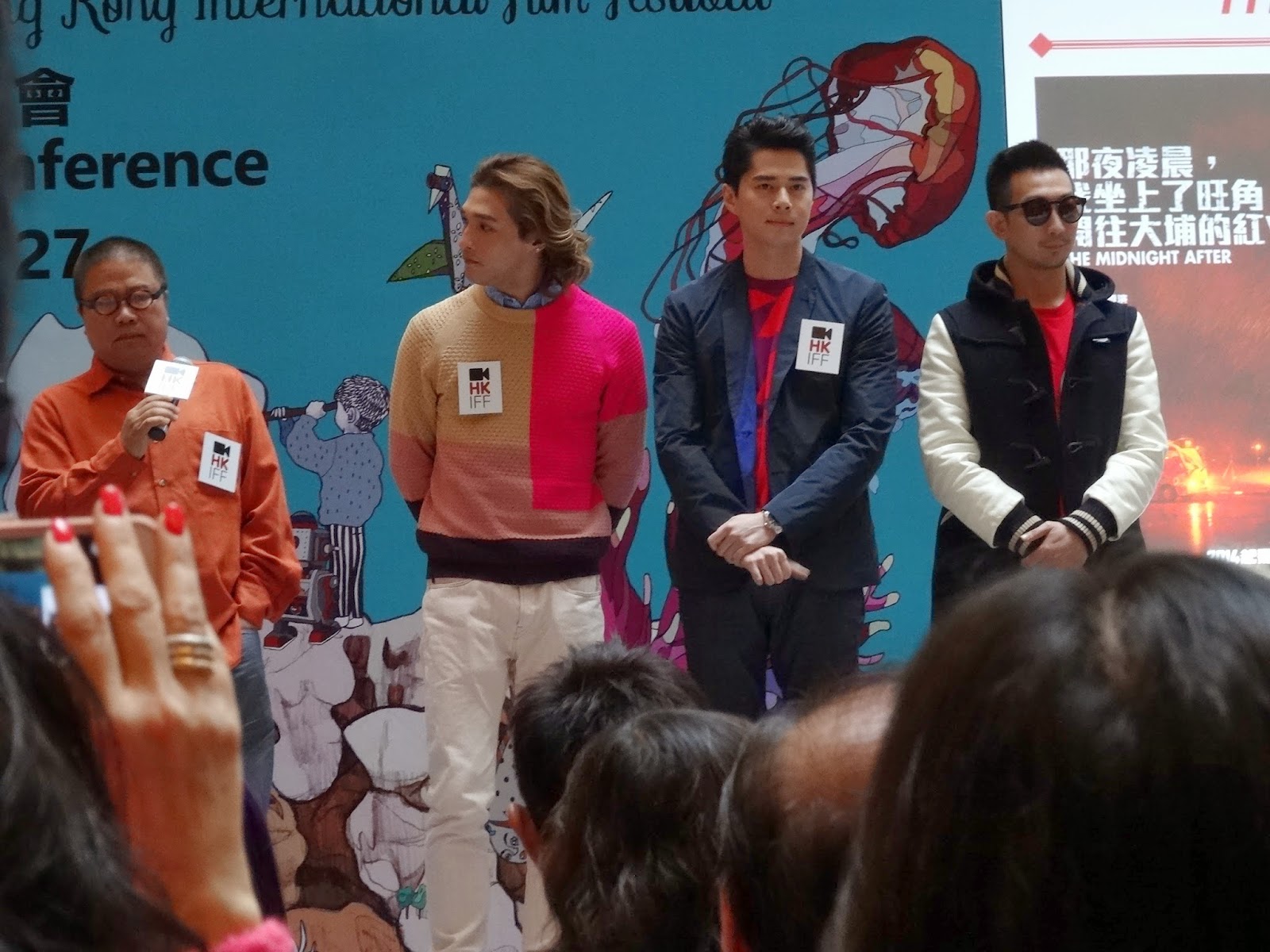 
Back in 1997, director Fruit Chan burst into prominence with his budget masterpiece Made in Hong Kong.  Over the next few years, he delivered a number of interesting films filled with socio-political commentary, including The Longest Summer (1998), Little Cheung (2000), Durian Durian (2000) and  Hollywood Hong Kong (2001), which I eagerly devoured.


But since 2002, he's only made two really good movies to my mind: imaginative horror pic Dumplings... Three Extremes (2004), a film so good that its producers realized that what was originally part of a short film anthology was worth turning into a feature length work; and another horror short, this one part of last year's Tales from the Dark: 1.


Seeing that it also came to the Hong Kong International Film Festival in the wake of having received mixed reviews at Berlin (where it had its world premiere), expectations weren't as high as with Aberdeen for the HKIFF's second official opening film.  In addition, although it has a larger cast than the Pang Ho-cheung film, The Midnight After just doesn't boast as much as star power.


But although it definitely is the more uneven and also arguably lesser film, this horror-drama that's adapted from an internet novel by a writer known as Pizza actually has more memorable visuals by far and one incredible music sequence that damn near propelled me out of my seat!

Imagine Hong Kong without people and other vehicles besides a red minibus plying the Mongkok to Tai Po route late one night.  Difficult to do, right -- and surely even more difficult to render onto film?  And yet, somehow, Fruit Chan and co managed to produce images of precisely that in this movie about 17 people (16 mini bus passengers and its driver) who, as their vehicle is going through the Lion Rock Tunnel, go from a Hong Kong full of people to one where streets, buildings and pretty much the world at large appear devoid of other humans (and, come to think of it, animals and insects too).


As for the music sequence: strange but true -- The Midnight After is the third film I've seen in less than six months to make prominent use of David Bowie's Space Oddity. And while I thought that The Secret Life of Walter Mitty had made great use of Bowie's 1969 song and that the song worked well Bernardo Bertolucci's Me and You (made in 2012 but released earlier this year in Hong Kong), the imaginatively staged scene in this Hong Kong movie that has Jan Curious belting out this number is damn near show-stopping and the absolute highlight of the film.


If only The Midnight After could sustain that level of quality throughout.  As it stands though, the film is intriguing and immensely watchable for the first two thirds but then seems to turn into meandering wreck as it goes into the final straight.  Particularly frustrating is that many questions remain unanswered, loose ends are not tied up and it just generally feels like the film is going nowhere... until you hear talk that there's going to be a sequel, not least since the film only brings viewers to around midway into Pizza's Lost on a Minibus from Mongkok to Tai Po.

From what I've gathered, no definite plans exist as yet for a sequel -- with the film's producers wanting to wait and see how The Midnight After does at the box office before committing to a follow up movie.  For me though, this doesn't make sense -- for if I look upon that this film as part 1, then its ending doesn't seem senseless and I'd consider the film as a whole to have been pretty good but if I'm supposed to treat the film as is as complete, then its last half an hour or so comes across as stupid and damns the work as a whole.


So, really, this film should either have been planned from the outset as the first part of two part cinematic work or not have been made at all.  Put another way: the insertion of a "To be continued" line at the end of the film and the removal of its final sequence would improve my experience of viewing this film enormously, so much so that I'd have come away really impressed and very much looking forward to checking out Part 2 of the story.

Sounds like a very interesting film, YTSL. Your description of the film and its ending reminds me of Wong Kar Wai's Days Of Being Wild, which was originally intended to be a 2-part film. The final scene of DOBW with Tony Leung was mesmerising but left many viewers (myself included) confused.

The difference though is that "Days of Being Wild" has just one "extra" scene. For "The Midnight After", the last 30 minutes or so leading up to the "conclusion" of the film don't make much sense unless they are viewed as setting up the story that will unfold in a follow up film. :S

I see. That would be so annoying. No need to worry now though because your review will no doubt prompt the investors to commit to a second installment considering your influence! ; )

If only I had that much influence on filmmakers... Actually, Fruit Chan is now on the record as saying he wants to make a sequel -- it's now dependent on how "The Midnight After" performs at the box office. (It's just that, like I said, people like me would be more inclined to like it if we knew for certain going in that it's Part 1 of a 2-parter.)

The Midnight After sounds like an intriguing film until it becomes a "meandering train wreck". Still, I'll wait patiently for a hopeful release in North America.

You mention "Dumplings" earlier in your review. I've held off seeing this for the longest time because of the content. Yesterday I finally viewed it and yes, it did make me feel queasy. However, I watched it a second time and this film did win me over...With such a good director as Fruit Chan, an ace cinematographer like Christopher Doyle, and a uniformly excellent cast - I thought this film delivered as a satire of society's obsession with preserving youthful looks at all costs!

IF "The Midnight After" has a follow up, then that last bit won't feel so bad...

Re "Dumplings: You watched it twice in one day? Oh my re your stomach if so! ;b