Spirits undampened -- and a hike still enjoyed -- on a damp day! 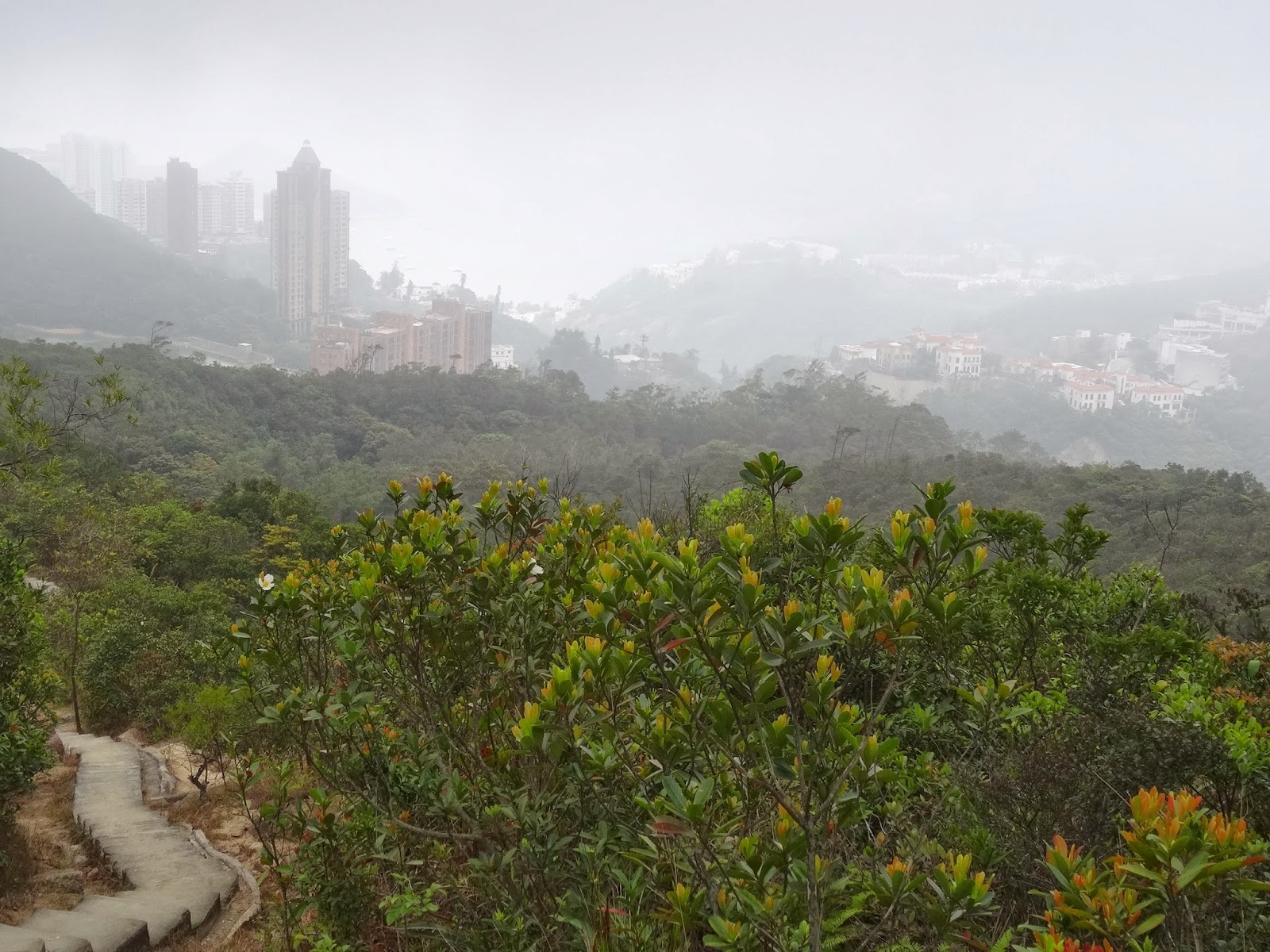 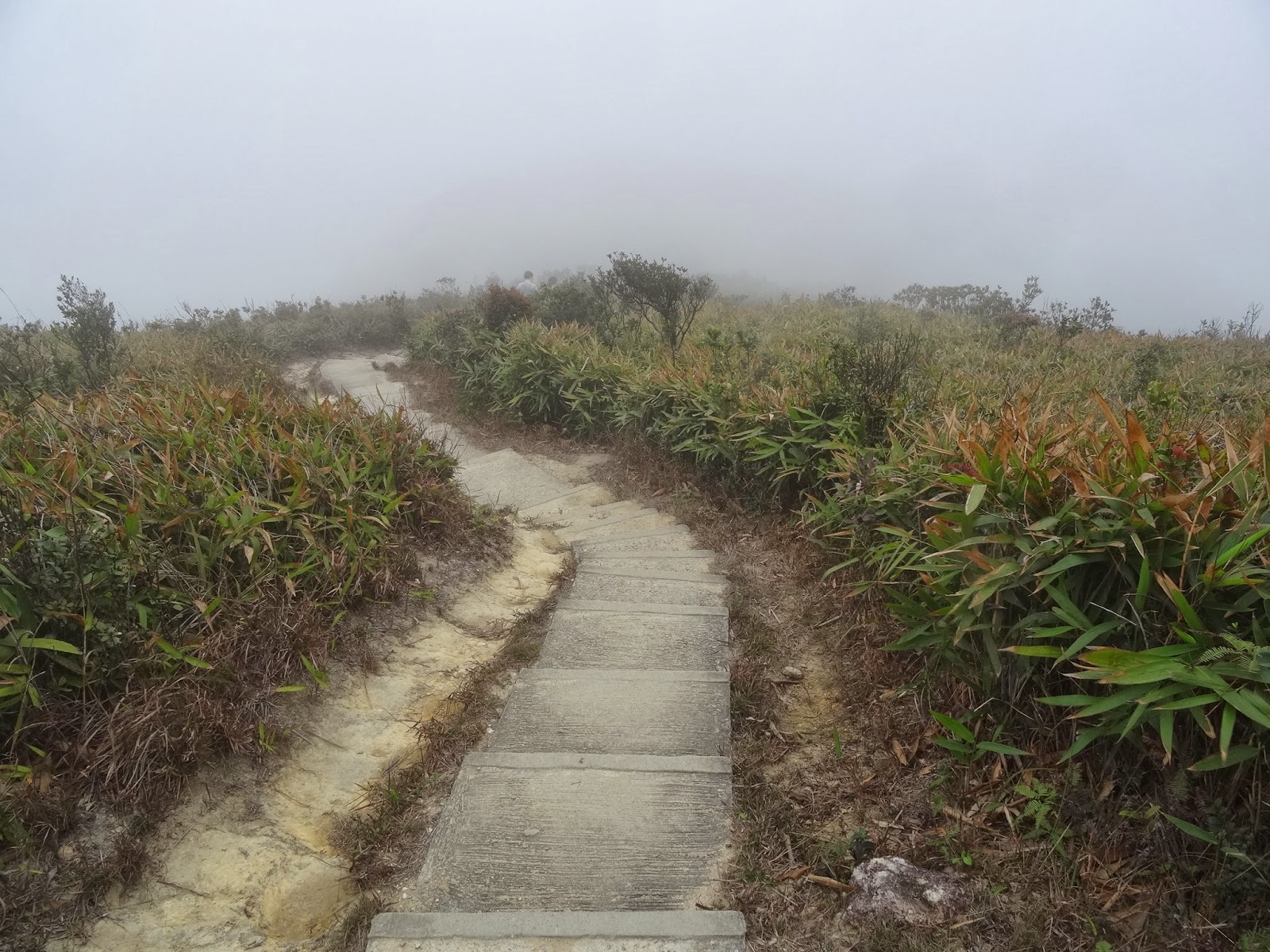 Shortly before I left my apartment to meet the two friends with whom I went hiking today, I checked the Hong Kong Observatory's website's dedicated pages giving weather information for hiking and mountaineering and was happy to find that Hong Kong Island had the highest visibility levels of anywhere in Hong Kong at that point in time as today's planned hike would take us from Wong Nai Chung Gap to Quarry Bay via Jardine's Lookout and Siu Ma Shan.

Although I had toyed with going up nearby Violet Hill instead, the top of it looked more mist covered than Jardine's Lookout, so off along Section 2 of the Wilson Trail we went instead.  But even while the top of Jardine's Lookout (which, strangely enough, is the same height above sea level as Violet Hill!) was clear of mist when we set off up that 433 meter high hill, that was no longer the case when we got to its summit!

Sadly, then, the wonderful views that can be had from it on a clear day (like when I took the photos in this blog entry) were no longer visible!  Yet rather than feel down for much of our hike, my two friends and I reveled instead in how cool and brisk the weather had become (which was a nice change from yesterday's mugginess) and enjoyed how often the sound of the wind -- which also could be seen sending waves of mist on their way -- was louder than any made by humans!

At the same time, because the temperature was a good 10 degrees warmer at minimum than just a few weeks ago, we didn't feel like we were freezing even while we also could feel droplets of first mist, then light rain, hit us.  And rather than let the not optimal hiking conditions dampen our spirits, we continued enjoying being out in the great outdoors that many people continue to not realize that Hong Kong possesses and also enjoyed having discussions on a range of topics as we trekked up and down along the trail.

About the biggest impact today's weather conditions had on me, actually, was that it got me pining for a steaming bowl of soup post-hike.  So after getting back into the city, my party made our way to the Taikoo Shing branch of  the glorified cha chaan teng-like Macau Restaurant, where I first consumed a wonderfully comforting rice noodle soup that had minced pork and tiny oysters as its toppings, then a heavenly crispy bun slathered with butter and condensed milk for dessert -- all of which made for a repast that made me one happy post-hiker indeed! ;b
Posted by YTSL at 9:38 PM

I was also in that area today. But I started off around 1400 hrs in Apleichau, went up Aberdeen Reservoir to Wanchai Gap, then along Black's Link. When I reached Wong Nei Chung Gap, I went through Sir Cecil's Ride all the way through and went down to Quarry Bay at around half past six.

Got all soaked up as when I reached the Quarry on Mount Butler Road, it started raining. After Wong Nei Chung Gap it was like walking through the clouds only with occasion clearings. Visibility was low.

Wow, you went on a longer hike than my friends and I. So it only started raining near the end of your hike?? From the peak of Jardine's Lookout and for much of the hike, it felt like we were walking through the clouds -- i.e., was chalking the moisture to mist. But around when we were at the top of Siu Ma Shan, I got to realizing that (light) rain was falling down on us!

It would seemed to be a casual or leisure walk to me. And the slopes were not steep. Most of the way was paved until I reached the last section of Sir Cecil's Ride, which is a mud path. I did not expect to be soaked like that though.

Ya, you sound like a really serious hiker to me!! More than incidentally, I picked Sunday's hike route in large part because it was paved as I was expecting many unpaved trails to be on the slippery side in view of the rain on the previous days. Even so, I didn't expect to get caught in the rain on the hike itself! ;S

It may not have been a sunny day, but all of nature's moods are interesting, as these photos illustrate. Second photo could be a gateway to moor country.

Enjoyed your link on this blog to "From Jardine's Lookout to Mt. Butler, June 12, 2012." In this blog, the third photo from the top of the quarry resembles an excavated amphitheatre. Will definitely see this on a future visit...The sixth photo from the top, a well composed elevated view of Tai Tam Reservoir, proves you don't have to leave Hong Kong Island to witness near-idyllic nature...But,it is the photo of the brown, white and gray butterfly that really grabs me. An exquisite specimen of the natural world. Almost resembles brushed velour. Again, nature is always the best artist.

I am so happy that you click on the links I provide, and like you what you find when you do so. :)

And yes, nature is amazing. In Hong Kong, if I wanted to gripe, I'd say the winter is too gray and often filled with low visibility days while summer's too hot. But if I want to be positive, I'd say that winter has days where the temperature is in the range I find optimal, and summer has beautiful sunny, blue sky and high visibility days. :)