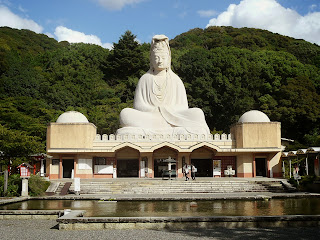 Established in 1955, the Ryozen Kannon Temple was the
newest of the many temples and shrines I visited in Kyoto 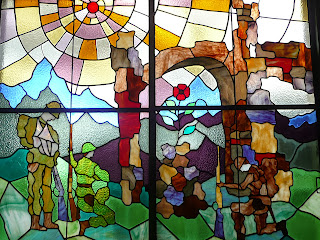 Not what I expected to see in a Kyoto temple --
a stained glass window created in memory of the more than
48,000 foreign soldiers who perished on Japanese soil or
territories under Japanese military control during World War II 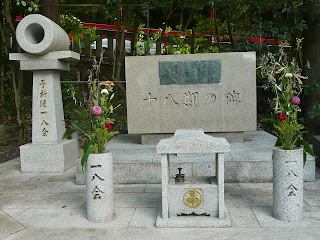 Among the thousands of temples and shrines in Kyoto are ones that are super famous and others that don't seem to get talked about or visited that much. Take as examples Kiyomizudera and the Ryozen Kannon Temple within walking distance of it that's considerably younger and less well known.
While some people are drawn to the temple by the sight of its 80 feet high statue of Kannon (aka Guanyin, the Goddess of Mercy), others may hesitate to enter it because of it having been established as a memorial to those who fought and died in the Second World War.
Should you do so though, you'll find spaces dedicated to the memory of non-Japanese soldiers who perished on Japanese controlled territory along with those who served in the Japanese military during World War II -- and while it's true enough that the memorial to the Allied soldiers is more modest in size and somewhat neglected in feel, I do appreciate its existence and think that the reasons behind its establishment are indeed sincere.

More than incidentally, while doing some research for this blog entry, I came across the following in John H. Martin and Phyllis G. Martin's Kyoto: A Cultural Guide about this religious establishment:-
"The Ryozen Kannon Temple...marks the repentance most Japanese feel for the extremes to which nationalism took the nation."
"In 1955, ...a momento mori was constructed by a transportation firm to honor the war dead of the Pacific War (World War II in the Pacific and Asia). It honors not only the Japanese soldiers who died in combat but also the dead of the Allied Forces who opposed Japan. After paying the entry fee, the visitor receives a lighted incense stick; this is to be placed in the large incense pot before the shrine where prayers may be said for the peaceful repose of the dead..."
Posted by YTSL at 11:04 PM

You've been knocking out some very interesting photo-essays on your Kyoto experiences. I'm usually a gweilo with a lifelong interest in Chinese culture, but your latest blogs have rekindled my interest in Japan. In this Ryozen Kannon entry, you balance the aesthetics of the photos by interjecting some historical facts.

Statues of Guanyin (Kannon) are scattered throughout Asia, but this Ryozen Kannon truly radiates her message of universal compassion.

Thanks once more for your comments. I think some of my regular readers get put off by my Japan holiday posts as they are more interested in Hong Kong -- but I feel I see and experience so many interesting things on my Japan visits that I need to record them down on my blog.

Re the Ryozen Kannon: I do like that its creators made sure it looked beautiful rather than just was awesome size-wise. :)