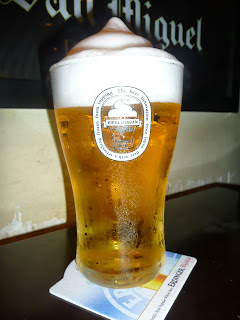 What will they think of next? Kirin Ichiban beer
topped with frozen beer foam! :b 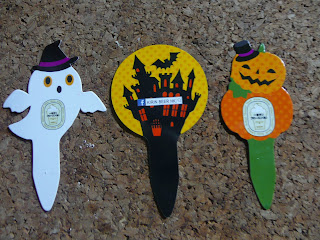 Halloween decorations that I managed to stop being put
on my glasses of Kirin Ichiban frozen draft beer last night ;D

Shortly after the then teenaged tennis player Michael Chang triumphed at the French Open in the summer of 1989, I saw an ad in a magazine that had a line that I remember to this day: "You know the world is getting smaller when an American named Chang wins the French Open". And last night, I got to thinking of that line again when, in an izakaya in Hong Kong's Causeway Bay, the waitress tried to get me in the Halloween spirit by attempting to stick some Halloween-themed decorations into my beer!


Put another way: surely it's not all that expected for Halloween to be a big deal in Hong Kong, right?  And yet it is -- with there Halloween-themed parties and events taking place in many bars and other locales, Halloween-themed haunted houses and other attractions set up at both Ocean Park as well as Hong Kong Disneyland, and a number of folks taking to dressing up as hopping vampires (gyongsi) a la those seen in the Mr Vampire movies as well as other eye-catching costumes.

As a child in Penang, I was introduced to Halloween by way of comics such as those featuring Casper the Friendly Ghost, and Snoopy and the Peanuts gang. (Around the same time, I was introduced to Guy Fawkes and Bonfire Night -- which, frankly, sounded more fun when I was a kid! -- by Enid Blyton books).  Believe it or not, there are lines from one of those comics that I remember to this day and think of on October 31: "Trick or treat, trick or treat, trick or treat on Halloween, where ghosts and goblins by the score, ring the bell on your front door..."  Truly, the mind is a strange -- and sometimes scary -- thing, isn't it? ;b
Posted by YTSL at 8:47 PM

HI YTSL -- Yes interesting observation about Halloween! Saw many more young people into the spooky spirit this year with pretty good costumes on the MTR!

I was surprised to see so much of Halloween here, I really hadn't expected any, I was even prodded into wearing some Halloween makeup by friends here (not expats). Of course, not like the mania in the US but definitely there seems to be a trend.

And even in NYC I would have been delighted to see a couple dressed up as Robin and Batgirl getting off the train with me late in the evening, but here in Tai Wai? Cool. They had a baby with them too but I don't think s/he was in costume. But maybe next year, a miniature Penguin, perhaps :D

According to some sources, Hong Kong's Halloween love is due in large part to Allan Zeman, the guy who made LKF the bar area that it is and now heads Ocean Park. Ironically, really, considering that he's German-born, Canadian-raised and is now a Chinese citizen! :D

Wow, that is ironic.

Well, just like most other western holidays it is more commercial than anything else so it shouldn't be surprising that a businessman led the way I guess.

BTW, already saw a Xmas tree displayed here in Tai Wai. I know, that is another story. 8)

Re Xmas: be prepared to see weird displays, many of which don't appear to have anything to do with commemorating the birth of Jesus Christ... ;D