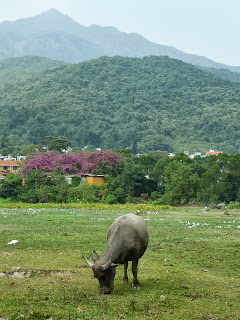 Water buffalo are a common sight in Pui O 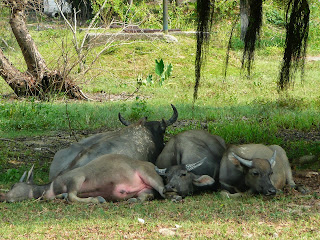 Feral but placid, a group of them were content to
just lay about in the shade of a tree this hot afternoon
(N.B. those who don't want to see X-rated parts on
animals -- please don't click to enlarge this photo! :b) 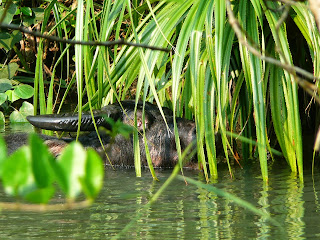 Another way to stay cool today: hang out in the water
as well as under some shade! :)

After a week of no hiking due to my having accidentally -- but of course! -- injured a foot after stepping on a small sliver of broken glass, I was back in the metaphorical saddle again this afternoon; this despite the temperature having climbed back up a few degrees from earlier this week, to the extent that some circa 30 degrees Celsius high temperatures were recorded this mid October day!
My hiking friend's and my route of choice this afternoon took us from Pui O to Mui Wo  -- but instead of going on Lantau Trail Stage 12 the entire way, we took a detour at Shap Long Kau Tsuen along a more or less coastal trail that initially took us down Chi Ma Wan Road and then by and past the villages of Shap Long Chung Hau, Shap Long San Tsuen, Wang Tong and Shui Tseng Wan before joining back again with the Lantau Trail near Mui Wo (which, in comparison to these other communities, felt like quite the lively metropolis!).
On the journey to our hike start, my friend had asked me whether we would be seeing any feral cows or (water) buffalo this afternoon.  My answer was "yes, for sure", since we were headed to Pui O, home to many feral water buffalo.  Even so, I didn't expect to see as many water buffalo as we did this afternoon -- not only near the hike start but further along the trail.

By far the most memorable sighting today came as we were crossing a bridge over a stream. My hiking friend noticed something in the water a few meters away from us that was way bigger than any stream resident we had previously seen but because it was partially obscured from view, it took us a while to figure out what it was.

As he told me later, my friend's initial reaction was that he was seeing either a large turtle or the Lantau Island equivalent of the Loch Ness monster whereas my own imagination ran more along the lines of a crocodile like Pui Pui!  But as you probably can guess, the mysterious creature turned out to be no more than the water buffalo living up to the water part of its name in the third photo from the top of this blog!!  ;D
Posted by YTSL at 10:19 PM

There are buffalo in Africa but it's Asia that has the water buffalo! :)

Have I been remiss in not closely reading your blog. When, where, how did you cut your foot? And where was puppet Ponyo when that happened?

Actually, that was the first time I mentioned stepping on glass -- and only to explain my non-hiking two Sundays ago! Embarrassingly minor domestic accident -- it took place at home, where Puppet Ponyo was hanging out with her sisters!