Dragonflies going at it, and frogs behaving not so naturally! 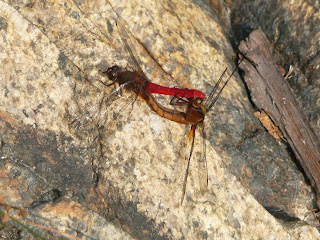 I thought this was going to be my picture of the day... 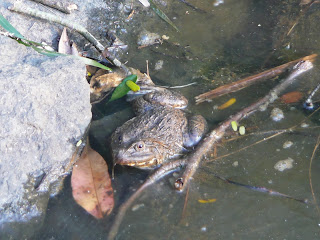 ...until I spotted and managed to snap a shot of this frog! 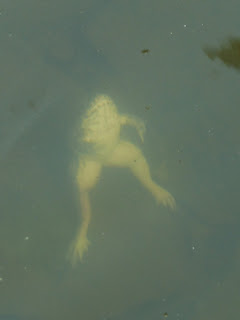 And what of this fella who looks like he's sitting
casually on a rock, only he's underwater  -- and
is a frog in a pose I tend to associate with humans?!

Before anything else: yes, I saw and took more photos of dragonflies going at it on my hike this afternoon!  And for the record: this was only the third time I've witnessed this phenomenon and photographed it in my six years or so of hiking in Hong Kong now!!  (So, despite what at least one friend thinks, I do not have enough critter procreation photos to devote a whole entire blog to them! :D)

Just about as rare a sight for me have been that of any frogs or toads -- let alone the spectacle of these amphibians in... um... interesting positions -- in the wild. And this even while I've heard them croaking -- often very loudly at that -- on a number of hikes in various parts of the Big Lychee.

So imagine my excitement upon catching sight of four different frogs in one single spot at Ho Pui Reservoir this afternoon!  The strange thing though is that the first of these creatures that caught my eye was one that was underwater looking like he was casually seated on a rock (in a manner that seemed more human than typically amphibian).  Even weirder was the fact that it never moved in all the time that I looked at it -- and ditto with another frog that I spotted near it but closer to the edge of the water -- and never made a sound either!
Were both of these frogs dead or alive?  Considering that the frog on the water's edge (see the second photo from the top of this blog entry) had its eyes wide open, I tend to the opinion that it was indeed alive -- but I have to say that I'm far less sure about the status of the frog that was underwater (and in the third photo from the top of this blog entry).  In fact, part of me wonders whether it was a fake (rubber?) frog -- only then, surely it'd be floating on the surface of the water rather than positioned where it was, right?
In contrast, the two other frogs I spotted in the area behaved more naturally -- with one trying to stay as hidden as possible from my eyes and camera, and another doing the same before opting to jump into the water and swim further away from where I was.  And as weird as it may sound to some people, I have to admit that I did get a thrill from seeing a frog swimming -- as I've never observed that before, and it did so in a manner that I'd almost go as far as to say was pretty stylish looking! :b
Posted by YTSL at 11:05 PM

HI YTSL -- so you couldn't tell if the frogs were breathing or not? The one sitting upright does look strange!

Re the two frogs that didn't move: yeah, it was hard to tell if they were breathing or not... no bubbles or anything coming from the frog that was sitting underwater. :S

We don't have much in frog line here, North Idaho.

I'm surprised to learn that there aren't many frogs in North Idaho. Is it because the land there is on the dry side?