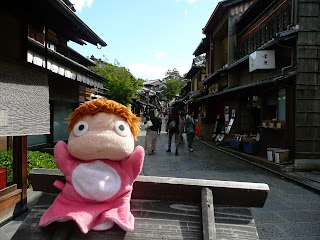 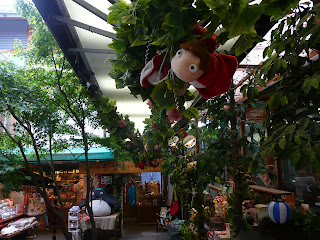 Other Ponyos -- specifically ones that resemble my
Stress Ponyo -- hanging about near the entrance to
the Donguri Republic located in the area
dominated by Kiyomizudera!! 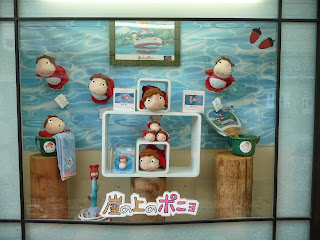 Still more Ponyos -- this time behind glass near a second
Donguri Republic, this one located along the street
between Sannenzaka and Ninenzaka!!!

Before my recent trip to Kyoto, I was a bit worried not only that the city would be overly-crowded but that it also would be on the (socially) cold and overly elegant side.  For those who harbor similar ideas about the historical Japanese city though, let me assure you through words and also photos (like those above) that Kyoto actually does have its friendly and assuredly kawaii side!

Early on during my visit, I started getting an inkling that maybe Kyoto wasn't all socially uppity and culturally sophisticated when I spotted many Hello Kitty and other kawaii character items about the place -- be they all manner of souvenirs for sale at many stores, charms hanging from schoolbags and handbags, barrettes keeping little girls' hair in place, T-shirts worn by adult women as well as younger females, etc.


Indeed, I'd go so far as to say that I saw more Hello Kitty items belonging to people in Kyoto than I generally have done in Tokyo, the city that -- according to a friend who lives there -- generally prefers newer characters such as Rilakkuma to the cute cat that's close to four decades old now.
But what really confirmed my feeling that Kyoto embraces kawaii was when I discovered not one but two Donguri Republic stores selling Studio Ghibli character goods on my visit to Higashiyama, a part of the city considered to be one of Kyoto's best preserved historic districts.  Billed by such as japan-guide.com as "a great place to experience traditional Kyoto", I found that it also was a great place to get affirmation that other people share my Ponyo love!

Case number 1: As I was standing near the entrance to the store closer to Kiyomizudera, a group of American college students passed by and cries of "Ponyo!" emanated from a number of its members as they spied the Ponyo plushes literally hanging about the place.  Case number 2: As I stood admiring the display of Ponyos near the other Donguri Republic in the area, a Japanese mother and son stopped to do the same, and make cooing noises while they were at it!

In addition, suffice to say that people in the area -- and, for that matter, everywhere in Kyoto, heck Japan! -- were not shocked when they saw me readying Puppet Ponyo to pose for my camera.  And yes, I did spot other people posing toys and such for photos there... though it's true that only I -- mwahahaha! -- was in possession of a Puppet Ponyo. ;D
Posted by YTSL at 11:41 PM

Thanks for posting such an enjoyable photo-essay. Higashiyama is a place I visited many years ago, but which still seems magical in my memory (especially at twilight). Ponyo(s) always adds a touch of exuberance to your photos, which never fail to brighten my day.

For an adult male like myself to be captivated by these ponyo images might seem to some like an indulgence in the "cuteness" factor, but I don't see it that way. The entrancing Ponyo images on this web page simply make me feel happy (and other people feel the same way I'm sure)and that is justification enough for enjoying them.

As for Puppet Ponyo, being a world traveler and having visited Buddhist temples and shrines - well, spiritually, she must be the most enlightened plush on the planet...In my eyes, Ponyo is nothing less than a dynamic meme, spreading her ageless jubilation throughout cyberspace.

Thanks for making my day and making me smile with your comments!

I'm so glad you find the Ponyo images captivating and cute. As you know, I really do too! :)