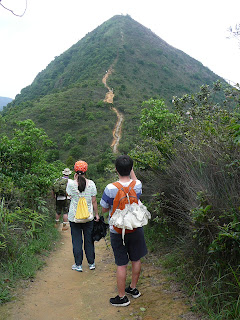 Do we really want to go up that?! 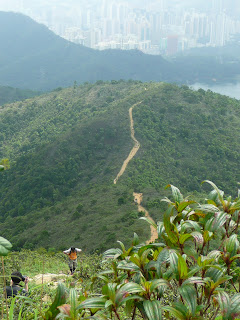 Yes, because by that point, one's already climbed up
pretty high up Needle Hill already! 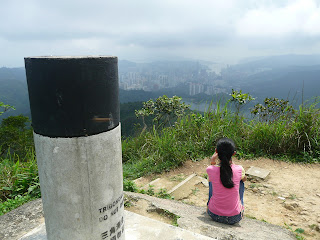 And yes, there really are beautiful views to be had
atop the 532 meter hill that's
Hong Kong's joint 40th highest (with Mount Parker)

Last week, a friend and I tried to hike up Mount Hallowes, only to have to abandon our bid to go up Hong Kong's 100th highest peak some three hours into our hike.  Truly though, it wasn't the hill that beat us but the combination of bad weather, not great visibility and trails that just were too difficult to make out and correctly follow.  As proof, I offer the fact that just one week, that same friend, another friend and I successfully made it up a close to 150 meter higher hill -- and on a hotter and more humid day to boot!

The big difference is that Needle Hill is along a section of the Maclehose Trail that's well marked (as well as considerably more trafficked than Mount Hallowes).  And while I have to admit that, because sections of the trail up and down it don't have much coverage, this hill that lies within Shing Mun Country Park is not the most ideal one to hike up on a hot, sunny day, I still opted to go up there this afternoon rather than a cooler one like we've had in previous months because this was one with blue skies, something I've not regularly seen for some time now, and (relatively) good visibility too.

Suffice to say that the views from the top of Needle Hill -- and, actually, on the hike up and down it -- were pretty cool.  To the west, a fog shrouded Tai Mo Shan dominated the landscape.  Down below -- first to the south, and then on our left for most of the hike -- was Shing Mun Reservoir.  Visible on our right side for much of the hike, then south, were the Kowloon hills, including Lion Rock, while Shatin was visible as a lengthy urban sprawl for much of the excursion.

Unusually for a hike in this area, we didn't see even one monkey this whole afternoon!  Although I do usually welcome critter spottings while out hiking, I can't say I'm all displeased by today's lack of monkey sightings though.  For, frankly, I feel that I've already seen my share of monkeys while out hiking in Hong Kong -- and was pretty horrified to see one far from their usual range in Hoi Ha last Sunday!

On a different note: Today's hike got me realizing that we're firmly back in a hiking season where I will need to bring at least 1.5 liters of water (and Pocari Sweat!) with me -- whereas for many months now, I often don't even end up drinking 1 liter of liquids over the course of a hike (that averages 4 to 5 hours each time).  Put another way: summer's arrived in Hong Kong -- and sure enough, upon checking the Weather Underground of Hong Kong website, I've found that only The Peak and Ngong Ping didn't have a maximum temperature in the 30 degree Celsius range today! :O
Posted by YTSL at 9:06 PM

And speaking of 30 degrees...it was 30 degrees F (-1.1 C)here Thursday morning when I left for work but later in the day the temperature climbed to 77 degrees F (25C).

I don't care for humid weather. Looks like a nice place for a hike.

It wasn't the most difficult hike I've gone on but it was pretty hard -- in large part because of the heat and humidity of the day.

Re it being 30 degrees Fahrenheit where you were last week: yikes, especially as we're already midway into May!!! :O

In a perfect world, Hong Kong wouldn't have high humidity so much of the year. But at least when it's hot and humid here, it often also is really beautiful in terms of blue skies and high visibility! ;S

The trail leading up to the hill is really a sight to behold!

It sure is. And part of me was thinking: Ooo err, I don't want to climb this. But another part was telling myself: oh come on, you've already come this far -- and that part won out! ;b

How to go there.??? Really wanna goo

Take it that you're in Hong Kong? If so, you can head up Needle Hill along a trail from the southeastern section of Shing Mun Reservoir.

Afterwards, you can either continue along the trail to Grassy Hill or cut down to Sha Tin on another path. In either case, make sure you bring lots of water with you -- especially if you plan to head there this summer! :)