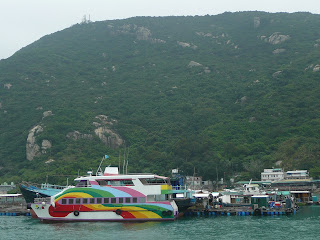 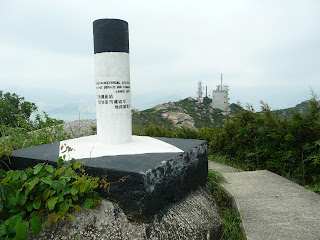 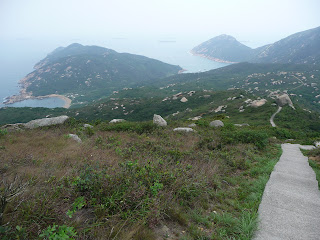 And yes, even with the haze, there were some nice views
to be had -- including of sections of Lamma
close to Chow Yun-Fat's ancestral village :)
Today is election day for Malaysia.  But I didn't vote -- since for the great bulk of my adult life, Malaysians living overseas have been forbidden to vote and I didn't find out that the law has been changed until after the registration date.  So, instead of going and voting in a national election for the first time ever, I went out hiking as per usual on a Sunday.
This afternoon's destination was Lamma Island -- with my specific aim being to go up its second highest hill, Ling Kok Shan, and then hiking along a circuit that take me from Sok Kwu Wan and back again via Tung O, Shek Pai Wan, Yung Shue Ha and Mo Tat that, when my then regular hiking companion and I had gone along it a couple of years back, had been notable for the large amount of large spiders we spotted along the way!

Arachnophobes should feel happy that this time around, I didn't see a single big spider along my hike.  In fact, the only spiders I saw were tiny.  Indeed, as far as critter spottings were concerned, this was an excursion notable for my spotting unusually tiny critters -- including a grasshopper that didn't seem even one inch long as well as a bug I can't identify and a few spiders, some on webs, and others not!

Far more prevalent sights on today's hike though were large granite rocks and boulders on the Southern Lamma hill slopes, many of which were interestingly shaped (including at least one I thought resembled a turtle -- though admittedly not as much as the famous one at Po Toi!).  And yes, the contrast between the rocky upper portions of Ling Kok Shan (and nearby Mount Stenhouse) and the green, thicker foliaged lower portions was quite marked, even startling.
Almost needless to say, this hike was yet another that was followed by a nice meal.  Granted that today's wasn't as superb as the one my hiking friend and I had at Tai Wing Wah last Sunday but the dinner (that included razor clams in black bean sauce and scallops with garlic and vermicelli) at the Lamma mainstay that's the Rainbow Seafood Restaurant really wasn't too shabby at all.  And yes, I do like that they throw in a complimentary ferry ride back to Central for the price (on a boat such as the one in the photo at the top of this blog entry)! :)
Posted by YTSL at 9:22 PM

That's sneaky of them to change the voting qualifications AFTER the registration deadline...

No, no, sneakier... they changed the voter qualifications *without alerting people*, so that people like me found out only after the registration deadline...