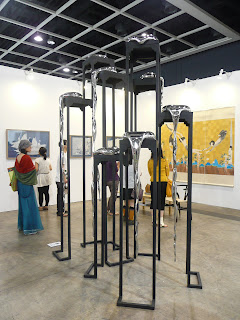 The booth at Art Basel - Hong Kong of Grotto Fine Art,
one of the Hong Kong-based galleries that
took part in the international art fair this year 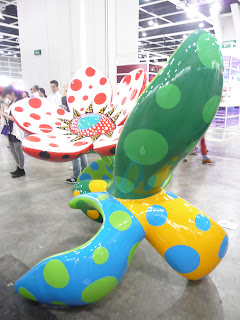 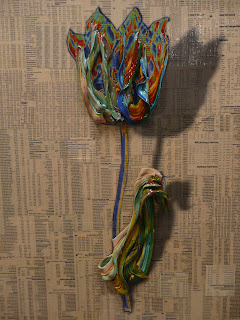 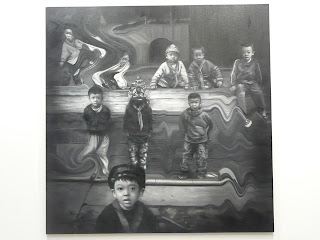 Years ago when I was undergraduate, I had the good fortune to spend a summer interning at the Museum of Mankind (the Ethnography Department of the British Museum that used to be house separately in premises in Burlington Gardens prior to moving back to the main British Museum in Bloomsbury).  Among the things I learnt during that instructive stint was that museums and art galleries loved rainy days -- because people were (are) more likely to visit them then than on days when it's fine and dry outside!
So when I woke up to more dark skies and rain yesterday morning, I got to thinking that it'd be a veritable zoo at Art Basel -- Hong Kong, the mega annual art event that previously was known as Art HK (and which I attended last year as well as in 2011, 2010 and 2009).  Only, as the blogger behind The Fragrant Harbour -- with whom I attended this year's art fair -- wrote in her Art Basel report, the turn out actually appeared to be on the relatively low side.
And with "just" 170 galleries represented this year (compared to 266 last year), this year's premier Hong Kong international art fair really was smaller than last year's final pre-Art Basel-takeover-and-renaming edition. Interestingly too, despite fears to the contrary, I actually noticed more representation -- and greater spatial prominence -- given to some of the smaller local Hong Kong art galleries (including Alisan Fine Arts,Sin Sin Fine Art, and Anna Ning Fine Art -- all of them female-owned in the bargain!) than in previous years.
Still, even while local artists like cut paper artist Bovey Lee and  fine-brush (gongbi) painter Wilson Shieh had works on show at this year's Art Basel Hong Kong, the truth of the matter is that the biggest splashes were made by international artists.  It's not just that the likes of Pablo Picasso, Juan Miro, Jean-Michel Basquiat, Julian Opie and Damien Hirst have bigger names and reputations.  Instead, there also were more works by them on display at this year's Art Basel Hong Kong -- this being particularly true with Picasso, Miro and Basquiat, whose works were being exhibited by more than one gallery taking part in this art fair.
Among galleries, the ones that had the most impressive collection of works on display were London's Alan Cristea Gallery (which exhibited works by Julian Opie, Miro, Picasso, Gordon Cheung and so many more) Tokyo's Ota Fine Arts and London's Victoria Miro Gallery (which co-presented a solo exhibition of the works of Yayoi Kusama), and New York's Van de Weghe Fine Art (which displayed works by Roy Lichtenstein, Alexander Calder and Rene Magritte, among others).
Something else that was very noticeable this year is that, whereas in previous years, the best art appeared to have been spread out over the two different floors that the art fair took up in the Hong Kong Convention and Exhibition Centre, this year, the art on display on the third floor was distinctly more eye-catching -- and, I'd venture to say, higher priced -- than the works on show on the first floor.  (And for the record: all the galleries I mentioned that had the most impressive collection of works on display in the previous paragraph had their booths on the third floor...)
If I had known this, I'd have started my tour of the art fair on the third floor rather than the first one.  As it was, I felt a bit rushed for time -- and also like I was prone to "art overload -- when going through the third floor.  Still, it's a measure of the greater overall quality of the art on the third floor, to my mind, that I still got more out of touring the third floor than the first floor -- which did have some gems but also a lot of works that, frankly, left me unimpressed and even downright cold.
Ah well, one lives and learns.  And next year, I definitely will pay far more attention the names of galleries when deciding which floor of the show to head over to first!
Posted by YTSL at 3:01 PM

Apparently we missed Anish Kapoor and some other Chinese artists on the first floor!

Lots of unfamiliar art works, eh? Weird since I could have sworn that we did a pretty methodical sweep of the first floor!

I remember most of those... don't remember seeing the deer though!

I wonder if the deer was on the first or third floor... ;S