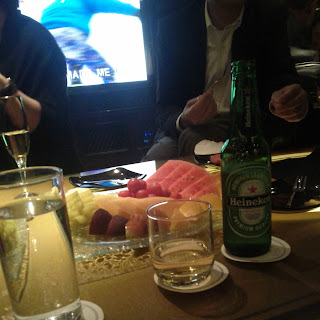 Photo credit: the blogger behind Monday Morning With... :b

Have you ever had one of those moments when you got to thinking that "I feel like I'm in a movie" -- more precisely, "I feel like I'm in a Hong Kong movie"?  Well, I had several of those one evening a couple of months back -- one that began with an invitation to attend a special hot pot dinner with business contacts and associates, some of whom I'd be meeting for only the first time that evening (although I had known their names for some years now).

At the hot pot dinner, I found myself seated on the left of an American gentleman who had just arrived in Asia a few days ago -- and whose first ever hot pot dinner this was.  As the hosts explained, they had arrived at their choice of dinner style and cuisine because they figured it was one that was casual and would put people at ease.  To this I'd say: this only is the case if all the people present have had prior hot pot experience... because, as it became patently apparent pretty early on, the poor American guy seated to my right was clearly all at sea and out of his depth culturally at this dinner.

It's not just that he clearly wasn't comfortable using chopsticks.  Rather, he didn't realized that when the experienced folks on his table told him that the spicy section of the "yin yang" hot pot was spicy, we meant that it was really spicy. Then there was his clearly going into shock upon noticing that the first three choices of ingredients to dip into the hot pot that were put onto our table just happened to be large slices of liver, portions of geoduck and that Hong Kong favorite, luncheon meat (i.e., spam)!

Truly, I felt like I was in a Hong Kong slapstick style comedy when he literally started choking after he tasted one of those ingredients (I think he opted for the geoduck as the least of the three 'evils') that he had dipped into the super spicy soup, then grabbed his beer and started gulping it down to get rid of the spices in a way that I had previously only seen in a movie.  And if this weren't farcical, another American fellow sitting on the table then proceeded to clumsily spill his glass of red wine and create a large stain on our table's previously immaculate white table cloth.

Things then took a turn for the surreal after dinner -- when we were ushered upstairs to a spacious private lounge that looked like the kind of place that, in Hong Kong movies at least, Triad bosses like to hang out.  More specifically, you know those kind of places where there's a large TV on whose screen a Karaoke video's playing, in front of which there's a coffee table laden with fruit plates and alcoholic drinks?  And if you don't, take a look at the photo at the top of this entry to get a good idea of what I mean!

The funny thing is that some time back, I had told a Hong Konger friend that I had never ever been into a Karaoke lounge and she had said that was crazy, in view of the years I had spent in Hong Kong, so she'd take me to one; after which I had outlined my idea of the ideal Karaoke bar -- one that I had got from watching movies.  Can we have a private room and be served fruit plates and be plied with alcohol, I asked.  And should I expect pretty female hostesses to come and visit?  Whereupon she had cried out, "No way, those are the Triad places!"

Well, now I found myself in precisely the kind of place I had seen in Hong Kong movies -- more specifically, Hong Kong Triad movies and crime dramas!  On top of this, our host at that private lounge had actually been seated in between two nubile young females when we had arrived at that space -- and upon spying us, had asked us, "What would you like to drink? Red wine? Whisky?"  Again, the kind of thing I had come to associate with Hong Kong Triad movies!!!

And if you must know: I settled for a beer (and here's confirming that the Heineken in the above photo's mine).  And I didn't sing that evening.  Actually, none of us did.  I think we were all too shy -- and determined to not go stir crazy in that lounge!  Maybe if the company (more specifically, the host) weren't so intimidating...  But then again, after I've stayed a Karaoke virgin for so long, it is going to take something truly special for me to start belting out any tunes in public!!! ;b
Posted by YTSL at 10:09 PM

What a terrific evening. So much the better that it does sound like something out of a Hong Kong triad movie!!! Do you have more tales like this?

Sounded like a lot of fun. I will have to try hot pot AND karaoke the next time I am in HK.

I often have hot pot with my wife's family. While we have never really had anything too "interesting" to eat, I remember the first time I tried a sea cucumber. The entire family watched me eat it and I struggled mightily to not throw it up. It was disgusting. Never again. :)

I'm glad you like this blog entry. Re more tales like this: I've had other "I feel like I'm in a Hong Kong movie" experiences... but have to figure out how to tell them in a way that doesn't incriminate myself, I guess! ;b

It was a lot of fun -- much more than I was expecting it to be at the start, to be honest. Re sea cucumber: I really like it!!! First encountered them in Tanzania -- got introduced to them by a Chinese businessman there to buy them (and fish maw). :)

One of the two things I have wished to do and were not able to in HK was karaoke experience - not the one you have went through but the one regular people go and have a good time singing songs.

In my country it is best not to drink on work functions (so good idea to stick with beer) :)

The only time I had hot pot was in Xian, China and I was with people who never tried it before and they were all conservative eaters. So it was hard to get them started but after they got a taste of it there was no way to stop them (actually we may have broken some sort of an eating record there - heh)

Teehee re your post tag suggestion... and also re your Xian hot pot tale!

BTW, that evening, I allowed myself two beers -- one at the hot pot dinner, and another at the lounge. I think they helped relax me some as I was quite nervous before dinner... ;S

Hey if I have Karaoked, anyone can karaoke including you! You just have to find some people who sing as badly as you do and it can be fun.

Before anything else, would like to check: is that brns.com Brian? And if so, when and where did you Karaoke??? ;b

During our NYAFF one year we went out with the director of Always and had a great time. I think I sang Costello's Peace, Love and Understanding if I recall.

So it is you! And wow re your having karaoke-ed with the director of Always. Very cool in fact! :D