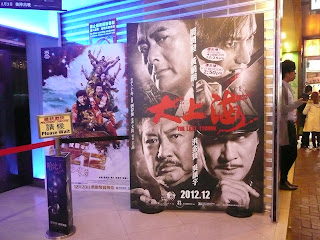 With the exception of the Andrew Lau-Peter Chan Ho Sun-Shawn Yue-Jimmy Wang Yu collaboration, it'd sound like I was announcing a line-up of 1990s Hong Kong movies.  But, in fact, I'm actually referring to two films that have opened in the past few weeks and another two that are due to open in the next fortnight -- more specifically, CZ12, The Last Tycoon, The Guillotines and The Grandmaster.


At the time of writing, I've viewed three out of these four films -- with only Wong Kar Wai's The Grandmaster thus far proving elusive.  (It's due to open in Hong Kong on January 10th but even now I'm not sure that it won't end up having its world premiere in Berlin instead!)


My favorite of the three is The Guillotines -- but judging from the largely negative reviews it has received (including from Stefan S. over at A Nutshell Review), it would seem that I'm in a minority for liking it -- and as much as I do.  For those who have yet to view it but still are planning to: I think it would help if you were to go into the movie expecting less of a straightforward period actioner in which the weapons known as flying guillotines prominently feature and, instead, a film that has more drama than action (in the vein of the Peter Chan produced Bodyguards and Assassins) and a dark take on brotherhood (in the vein of Peter Chan's The Warlords).  And if you are a fan of both those movies that Peter Chan has been involved in making.


With regards to The Last Tycoon: I don't expect it to win many critical accolades but I don't think the people who made it are expecting any.  At the same time, I'd wager that they also are pretty confident that they've made a movie that will please fans of Chow Yun Fat -- and that there (still) are enough for this film to make a tidy sum at box offices in Hong Kong and those other parts of the world where there remain ample numbers of people who love watching Chow Yun Fat doing the kind of things that made them consider him the coolest man on Earth.

And then there's CZ12. To put it mildly, I was not impressed by the trailer I saw for it -- and I initially wasn't planning to view the work, being content instead to scratch my Jackie Chan movie itch by re-watching Police Story III: Supercop for the first time in years just a few days ago. But upon reading that CZ12 had beaten out The Hobbit at the Mainland box office but also topped Hong Kong's Christmas box office chart, and topped The Hobbit as well as broken Chinese film weekly box office records in Malaysia and Singapore, curiosity got the better of me -- and I went and checked out the movie earlier this evening.


My verdict: it's actually not half bad and pretty entertaining!  To be sure, there are some preachy pro-China moments but, to be fair, Jackie Chan movies have featured messages about Chinese treasures belonging to the Chinese for some years now -- with exhibit A being Drunken Master II, the 1994 offering that some people (including myself) consider to have been Jackie's last great film.  Also, the film actually is considerably more fun and funny than its trailer made me think that it would be.

And while I understand some people being angry enough about his latest controversial comments about Hong Kong and free speech to call for boycotts of CZ12, I also want to support the Hong Kong movie industry that, more than incidentally, appears on intent showing this holiday season that it still has its stars and some fight in it after all.  (And yes, some might consider it stretching a bit to call CZ12 a Hong Kong film but, at the end of the day, it still does have some Hong Kong movie elements in it -- including a certain Hong Kong-born man called Jackie Chan!)
Posted by YTSL at 11:59 PM

I was wondering about "The Guillotines"--you make it pretty clear why it will be worth seeing as soon as possible. It sounds as if the flying guillotine is used less as a weapon than as a symbol of Imperial nastiness.

Wong Jing is certainly a skilled filmmaker. His major downfalls seem to be either losing interest in a movie before he has finished it or getting so distracted by having too many projects going at once that he doesn't do any of them well. Sounds like he did a good job with "The Last Tycoon".

Re "The Guillotines": what's a weapon to some is a symbol for others. When you watch the film, I think you will see what I mean.

Re Wong Jing: hmmm, I wouldn't praise him as much as you -- but I will say this for him: he has a good idea what people want and he's happy to give them it! ;)

What scores did you give "CZ12" and "The Last Tycoon"? I think I missed them.

By the way, I just noticed on the side panel that "The Grandmaster" and "Young and Dangerous Reloaded" both scored 6.5. Are they really as good as each other?

Wow, now I want to see "Young and Dangerous: Reloaded"! Just wondering: how does the reload compare with the original series of films from the 90s (starring Ekin Cheng)?

"Young and Dangerous: Reloaded" is hardly perfect -- and is technically often wanting. But I really like that it's got a sense of humor and also is very Hong Kong.

I think the original series was more serious -- with much in it that could be read politically -- and often more intense.

In terms of acting: I prefer Ekin and Jordan Chan to the new guys playing Chan Ho Nam and (Mountain) Chicken. But I like Paul Wong as Bee and Sammy Sum as Ugly Kwan -- maybe even more than I like Ng Chi Hung and Francis Ng in those roles. :)