Hong Kong cinemas - some gone, others still around 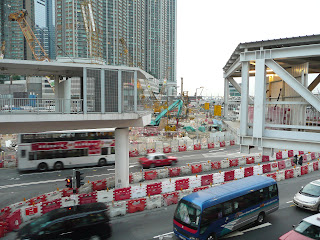 Not too long ago, there was a section of
overhead walkway where there now is empty space 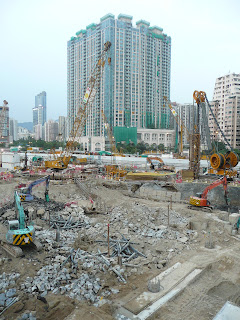 Earlier this evening, I had dinner with three visitors from Penang (including my mother).  As we strolled about in the vicinity of the World Trade Center in Causeway Bay, one of them -- who has been visiting Hong Kong since the 1970s -- talked about how there used to be a cinema where that complex now is located.


Upon doing a Google search after my return to my apartment, I found that he was referring to the Palace Theatre cinema which was in operation from 1979 to 1994 and sounded like quite the opulent movie palace.  And yes, I do wish that I had managed to watch a film there at least once.

Other Hong Kong cinemas no longer in existence that I wish I had gone to watch a movie in include Queen's Theatre (which used to be in Central), the Silver (which used to be located in Kwun Tong -- and made an appearance in Samson Chiu's Mr. Cinema) and the Fan Ling Theatre (which actually is now closed whose cinema interior can be seen in Riley Ip's Just One Look).  And yes, I sometimes do want to kick myself for not having done so since they were still open when I moved to Hong Kong back in May 2007.

Then there are the cinemas I've patronized but which also are no longer in existence.  These include the Miramar Cinema (where I viewed my first ever movie in Hong Kong -- and for the record, it was Okinawa Rendezvous), the Silvercord Cinema (also in Tsim Sha Tsui) and the Cine-Art House in Wan Chai (which I'd nominate for the "world's coldest cinema" prize due to its sub-arctic air-conditioning).  If truth be told, none of them were superb facilities -- but there is a part of this filmophile that nonetheless does bemoan their closure.

On a happier note, the Cine-Art House didn't completely cease operations -- as two and half years after the one in Wan Chai closed down in November 2006, a new Cine-Art House opened in Kowloon Bay.  Although its location is not the most convenient for me, I've indeed gone and watched movies there -- and am glad to be able to report that the air-conditioning level there isn't set as high as the Cine-Art House in Wan Chai.

On an even more positive note, the Broadway Cinematheque in Yau Ma Tei isn't only still going strong but in the past year or so, it's undergone renovations that has enhanced the movie-going experience.  More specifically, the individual seats are now significantly more comfortable and have been pitched at a more conducive angle for one's viewing pleasure.  In addition, I'd like to state how pleased I am that its designers didn't opt to follow the example of The Grand Cinema at Elements (that came into existence the year after I moved to Hong Kong) and install vibrating seats in any of its theaters -- this since, as I often tell people, I like to watch movies but I don't necessarily want to be made to feel like I'm in them!
Posted by YTSL at 11:40 PM

It's a sad observation about so many cinemas disappearing! But what also went with these movie houses were the giant billboards that were hand painted! That was an art form in itself! Not only did they have to paint the characters in their likeness but also very quickly too because they didn't have much time to complete them!

Even here in NYC where they can be a little more preservation-minded that happens. When I was in college I worked at The St. Marks Cinema (featured briefly in "Moscow on the Hudson") and that is long gone now. It was a 2nd run theater and you could sometimes see 2 blockbusters that came out the month before, both for $3, even in the early 80s that was a great deal. Wasn't even preserved as a theater, it was a GAP at first, now I am not sure what it is.

So glad that the Broadway Cinematheque successfully renovated (as we all know these things can go either way) and is thriving. It is my fav movie theater in HK. And I spent hours in the bookstore next door too.

To be honest, I'm saddest about the cinemas that had just one or two screens -- and less so than the Miramar or Silvercord. This especially since quite a few multiplexes also have come into existence in the past few years -- e.g., the ones at iSquare, The One and The Grand Cinema at Elements.

But yes, definitely hear you re those giant hand-painted posters. I wish they could be revived as many of them were so much more artistic than many contemporary posters.

As far as New York is concerned, I'm saddest about the demise of the Music Palace. Did you ever go there? I watched "Fist of Legend" there. A fun experience!

Re the Broadway Cinematheque: they're renovated the adjacent Kubrick bookstore too! :)

YTSL Good news about the renovation of the bookstore too.

No, I never went to the Music Palace. By time I was a regular Chinatown visitor it was closed. As you might have heard, it is now a hotel.

A bit like Chicago where all of the old movie palaces in the Loop are gone as are many of the iconic cinemas in the neighborhoods.

One that didn't really disappear is the Biograph, locally famous as the place where John Dillinger, number one on the FBI's most wanted list (an O.G. indeed) was shot down by federal agents as he exited onto the sidewalk. It is now the Victory Gardens Theater, an innovative part of the Chicago theater scene.

The Clark Theater, however, is long gone--it was a downtown cinema that showed a different double feature every day and was open 24 hours per day. The land under it became too valuable for such an eclectic operation to continue--a corner of a sixty story office building now sits where movies unspooled daily.

Cinemas can be very evocative places--one can recall the first time he saw "Grand Illusion" or "Pather Panchali" (or "Five Fingers of Death") long ago, for example.

Oh, didn't hear that where the Music Palace was is now a hotel! Guess it'd be asking too much for the decor to be Hong Kong movie themed, huh?

Thanks for the info re Chicago. The Biograph sounds really fascinating!

And I can definitely recall when I first saw "Pather Panchali" -- not in a cinema but in the old science lecture hall at my alma mater, Beloit College, on one of its weekly "foreign movie classics" nights. :)