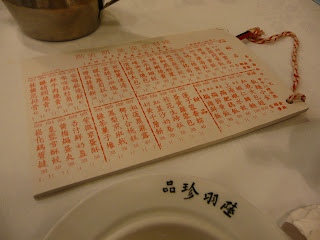 The dim sum menu at Luk Yu Tea House --
and yes, it's only in Chinese 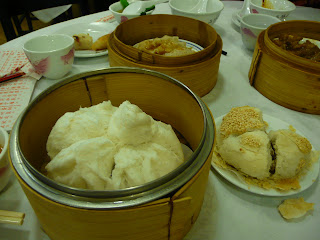 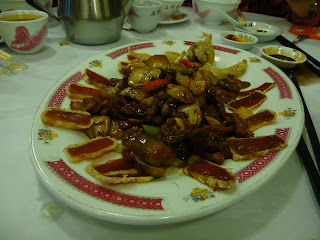 Pretty much every time my mother visits me in Hong Kong, we end up having a meal or two (sometimes even more) with a family friend I refer to the tai tai aunt.  For those who know about these things: I think it says much about her tai tai-ness that on this latest visit of my mother, we had a Shanghai crab feast at her house one evening and dim sum (or yum cha -- as Hong Kongers more often refer to it) at Luk Yu Tea House late yesterday morning.


In operation since 1933 (which is a very long time by Hong Kong standards), Luk Yu Tea House is the kind of old school dining establishment that you'd expect to see in movies more than reality (though, ironically, I don't recall a single movie in which the place has appeared).  And although it now takes credit cards and also is (more) accepting of non-Chinese customers, it still is the kind of place where regulars not only have their favorite waiters but also favorite floors and tables at the restaurant.


Put another way: Luk Yu Tea House can be an intimidating place to dine in for many people -- but if you're a regular (or even just dine with a regular), you can get treatment whose quality verges on the royal.  Also, it's taken as a given that you can order items from "off the menu" -- and you can get them to do things for you like read out every single line of the (Chinese language only) menu to a table whose members include a number of non-Chinese readers, and with good grace too!


One of the main draws of Luk Yu Tea House is that, like the even older Lin Heung Tea House, there are many "old school" items on its menu.  And yesterday, we sampled quite a few of these -- including one of the largest chicken buns I've ever seen (see the middle photo), a baked pastry filled with goose liver pate, and another pastry with the most amazing date paste filling I've ever had.

Additionally, even though it wasn't on the dim sum menu, we also had an order of my favorite dish at the place -- stir fried pigeon with Yunnan ham.  Sometimes, I think that I would be happy to just have a meal that consisted solely of slices of Yunnan ham.  At other times, I think that stir fried pigeon really does make for a very tasty combination with these rich umami tasting bits of pig -- and think that you need both ingredients to make a truly delicious dish.

On a movie fan note: the meal was made even more memorable by a celebrity spotting -- specifically, of Alfred Cheung also being there to yum cha that day.  My surreal life in Hong Kong being what it is, here's reporting that it's actually the third time I've seen the actor-director-producer "in the flesh": with one previous other time being at a preview of Echoes of a Rainbow, and another time also involving my happening to be eating at the same restaurant that he happened to be dining at! ;b
Posted by YTSL at 11:41 PM

It is definitely intimidating going into Luk Yu but I really like the decor in there. Don't know what to order when I'm in there, though.

However after I heard about a shooting in there many years ago I haven't walked in since!!! Maybe worth another visit?

I would prefer Luk Yu over Lin Heung... the latter is much too chaotic for my taste!

One thing in HK I never did...I think my companion was intimidated.

I think Luk Yu Tea House is less intimidating at dinner time because it's not as busy. Have you ever tried going there at that time of the day? Then, the menu's also in English.

Re what to order: I highly recommend the stir-fried pigeon with Yunnan ham!

As for the shooting: that took place 10 years ago!!

Maybe when you next return to Hong Kong... and teeheehee re your comments re Alfred Cheung! :D