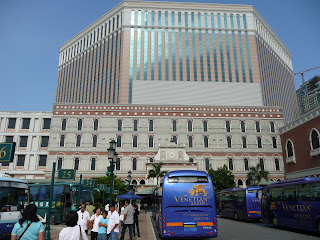 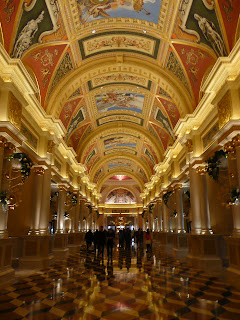 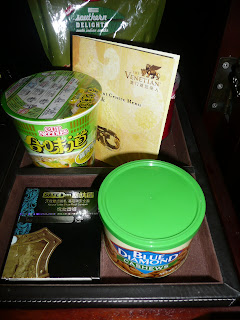 Readily available in the room are
drinks, snacks (including pot noodles
and cashews) ...and a condom! :O

As regular visitors to this blog know, I like going to Macau to eat and stroll about checking out the former Portuguese enclave's many cultural heritage gems (such as the impressively restored Mandarin's House). I generally try to avoid visiting the territory's casinos -- and to date I've not spent a single cent gambling in any.  Heck, I even generally try to avoid being in those hotels which are home to casinos -- though I am not above using their free shuttle buses that take me from the ferry terminal to them (and consequently into the part of town that I want to spend some time in Macau)!

On my first trip to Macau though, a family friend took my mother and I to the infamous Hotel Lisboa where I saw large numbers of prostitutes -- mainly young women from Mainland China but also a smattering of Putonghua-speaking descendants of Tsarist White Russians who had fled to China after the Russian Revolution -- walking up and down in its corridors or sitting at tables at the coffee shop along with their pimps waiting for clients. To put it mildly, I found the whole scene to be pretty unsavory as well as majorly eye-opening.  And suffice it to say that I've never been back inside the Hotel Lisboa even once since.

Although the Venetian Macao houses the world's largest casino, it also gets "bigged up" as a major tourist attraction whose highlights include an indoor mall designed to look like Venice's canal-scapes and a mega arena for concerts, sporting events and such like.  So a few years ago, my mother and I decided to go have a look around the place.


The day in question was a very hot summer's day and it amused us that we ended up spending a few hours there at the resort's expense -- and availing ourselves of free air-conditioned along with shuttle bus transport and sights -- without having to pay anything.  But what I reckon my mother felt was the highlight of hilarity occurred when, as we were walking towards the exit of the resort, with me a few paces ahead of her, a couple of people separately went up to me and whispered something before quickly moving away from me.

As my mother explained to a bewildered moi, what had happened was that a couple of pimps had gone up and approached moi, having mistaken me with my super short hair for a man -- and consequently someone interested in their wares.  Since I didn't notice any prostitutes lurking around the Venetian Macao (the way I had at the Hotel Lisboa), my mother told me -- how she knows all this I'm not sure! -- that they were already upstairs in the hotel rooms, and that the pimps were telling me the room address and such!

Rather than go and check to see whether this was indeed the case, my mother and I headed out as originally intended to a nicer part of Macau, one where we could resume our leisure strolling, punctuated by pleasurable snacking of such as Macanese egg tarts or the cool offerings of the wonderful Lemoncello Gelato.  But this weekend, I found myself back at the Venetian Macao -- and this time around, I did spend a night in one of its hotel rooms.

While checking out the room facilities, above the fridge and near the TV, I found snacks, drinks and something I now am not totally surprised to see in the room: a nicely packaged condom all ready to be used should the need arise!  And to me, it really sums up the Venetian Macao as much as its richly decorated interior and generally physically imposing buildings -- and truly emphasizes that although the place may look impressive on the surface, it ultimately is one Macau attraction which comes across quality-wise as much more brass than solid gold.
Posted by YTSL at 6:10 PM

Anyway it sounds like you enjoyed the room! How was House of Dancing Water?

Hahahahaha! Well, I have to admit that I think there's only one condom per packet -- am I wrong?

Re the room: it was spacious but have to admit that I was a bit disappointed by the bath towels being less large and fluffy than the ones at, say, the Mandarin Oriental! ;b

Re House of Dancing Water: it was okay... lots of cool stunts and the stage was the star of the show. But wish it was cooler and less stuffy in the arena! ;D

Uh yeah... only one condom per packet... did you think it was two for one or something? hahahahaha

That grand room is beautiful!!!

Woah, that must have a strange experience for you, especially noticing those escorts and their pimps...looks like a scene from a movie. I also stay away from hotels with gambling (features) since I'm asthmatic - smoky rooms are huge X-marks for me.

How interesting! I'd never heard of this place. It's funny how many places around the world feel the need to pay homage to Venice. The condom is funny!

Actually, when I think some more about the size of that packet, I'm wondering if there's more than one condom in it! ;D

Did you mean the corridor? It is pretty impressive -- perhaps overwhelmingly so! ;b

The pimps were actually in a different hotel -- the Hotel Lisboa as opposed to the Venetian Macao. But in any case, yes, it can feel like a scene from a (surreal) movie when seeing it in real life! ;D

I wonder what people who have been to Venice would make of the Venetian Macao should they visit the latter... Also, bet that (most) hotels in Venice don't have condoms for sale in their rooms... ;)

Gives new meaning to the idea of the "Full Service Hotel"

Been there once but I obviously did not enjoy the trip as much as u!

Glad my post amused you. You've been to the Venetian Macao as well as Macau itself? What about the Casino Lisboa? ;b