The House of Dancing Water at Macau's City of Dreams 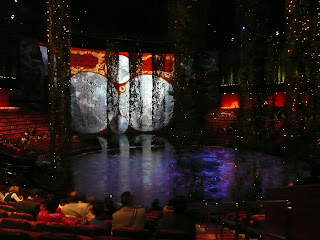 Before the curtains rise... 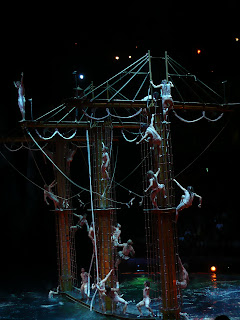 Early on in the show, we were given a taste
of the spectacle about to unfold 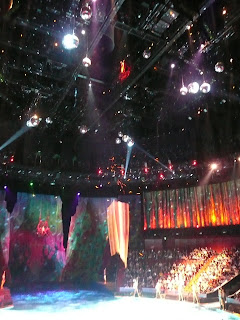 For those of you amused by the account of my stay at the Venetian Macao over the weekend and are curious what else I did when in Macau last weekend, wonder no more!  For here's letting you know that my mother and I also went and finally checked out The House of Dancing Water show  -- something that I've wanted to do for a while now but had previously felt that it just was too difficult to get tickets for.

A HK$2 billion production created by Las Vegas showman Franco Dragone, The House of Dancing Water opened in Macau back in September 2010.  Going strong (unlike the Cirque du Soleil's Zaia -- which opened in August 2008 but closed in February 2012 because it didn't attract the audience that was hoped and envisioned for it) into the last week of 2012, it boasts a storyline that involves Asians along with exotic foreigners in the form of white and black people alike -- and includes in its cast former Hong Kong Ballet senior principal dancer Faye Leung.

If truth be told though, I found the entertainment spectacle's plot to be on the lame side -- not least because of the Orientalism on display in the form of a white man spending a large percentage of the story attempting to rescue a beautiful Asian princess.  But while I can imagine that the major attraction of the show for many people actually are the often pretty breathtaking stunts on display -- notably those performed by the acrobatic (high) divers and also the motorcycle stunt jumping team, I truly was most impressed by the main stage/theater space that multiply transforms from a deep pool (which, at its largest, is bigger in size than five Olympic-sized swimming pools combined) -- sometimes (but not always) with shallow sides -- to a solid surface on which people can walk, dance, run and even ride motorcycles -- and thus constitutes a super special effect in and of itself.

Housed in a large complex called the City of Dreams (that is located across the street and consequently within walking distance of the Venetian Macao), The House of Dancing Water actually is one of those shows where you can see how the money was spent.  The world's newest, largest and most spectacular water-based show, it most definitely aims to be a major crowd pleaser.

My mother and I enjoyed the show for the most part.  However, there are two elements that we both would love to see improved. Firstly, we are agreed that the music was on the repetitive side -- so much so that it contributed to our nodding off for a few minutes during the performance! Secondly (and possibly relatedly), even while we understand the need for the auditorium to not be too cold since many of the show's performers spend a significant amount of time in the water, we do wish that it wasn't so hot -- and, more importantly, stuffy inside.

Indeed, we wonder if lack of oxygen was the major reason why we fell asleep -- or, rather, lost consciousness! -- at certain points during the show!  At the very least, we both are sure that it's not coincidental that we perked up considerably during the section of The House of Dancing Water during which motorbike stunts were performed.  Put another way: even while the stunts were really cool and fun to watch, we're convinced that what got us to feel very much awake then was the fact that the doors were opened and much welcome (relatively) "fresh" as well as cooler air was allowed to waft into the space!! ;O

Wow, what a production. Having spent time in closed areas (nowhere this large however) with lots of water I used to find myself nodding off too. These kinds of productions seem mind boggling to me.

Yes, it is indeed mind-boggling -- not least because it's so really imaginative in conception and pretty impressive in execution too! :)

you have so many stories to tell, i like listening/reading them.

I saw House of Dancing Water my last trip to Hong Kong back in late 2010. As a non-Asian I was very surprised at the white man rescuing Asian damsel plot line myself. But I loved all the staging/ technical effects and the physicality of the performers so I actually forgot about that part until I read your review.I don't remember it being overly warm in there when I went.

I guess the white man rescuing Asian damsel plot line was thought to be appropriate for Macau because of its mixed Portuguese-Chinese heritage. But I wish they'd do something different -- like have an Asian man rescuing a white female -- that kind of thing.

Lucky you re the overly warm part. I think it was the stuffy that really did it for my mom and me -- a little bit more air/oxygen to share with the hundreds of other people in the venue would have been good! ;(

Yes, it is unfortunate that it was too stuffy for you and your mom to enjoy fully especially since it is so expensive and difficult to get tickets.

BTW love your pix, this is definitely one of those performances where someone with skills and practice can capture it a lot better than true amateurs like myself.

Hahahaa you're right about the white man rescuing the Chinese chick. But where are you going to find a Chinese guy built enough to do all those stunts??!!!

I enjoyed the show too but still don't get how the motorcycles fit into the storyline...

Fortunately, it's easier to get tickets for the show these days -- and we actually got our tickets free!

And thanks for liking my photos. There are many which I wish came out better. Think I just lucked out with a few of my snap attempts.

Well, I have a friend who describes his gym buddy as a cross between Bruce Lee and Arnold Schwartzenegger, so I'm sure there are some Chinese guys built well enough to do all the stunts, etc. ;b