Birdwatching in the vicinity of Kwun Tong Pier 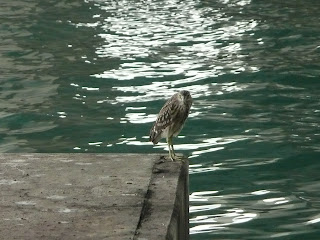 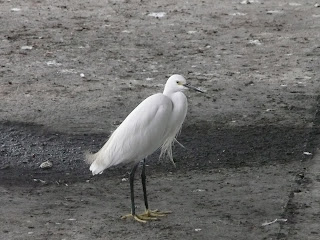 Is this some kind of egret that I see in front of me? 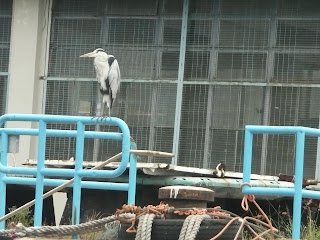 When many people (particularly in Asia) think of Hong Kong, they think of a concrete jungle.  So it can come as a shock to them to find that about three quarters of the Big Lychee is actually countryside rather than urban.  Even more surprising is the idea and fact that nature's representatives can be known to "intrude" into high density urban areas.  But this really does happen -- and I don't just mean weeds growing out of cracks of cement sidewalks and such as flies, cockroaches and geckos invading people's homes.


Rather, I mean such as butterflies and dragonflies straying and ending up flying into shopping malls, public buses and such. Or even bigger creatures like wild boars and feral cows finding their way into obviously urban parts of Hong Kong.  And various migratory birds deciding to make their homes on sections of land bordering Victoria Harbour, including in the areas close to Kwun Tong Pier.

When my mother was in town recently, she and I happily whiled away one afternoon doing such as taking the  ferry from North Point to Kwun Tong and another from Kwun Tong to Sai Wan Ho. While waiting at Kwun Tong Pier for our ride, I got some amusement out of taking photos of some of the birds that were hanging out there.

My mother fixated on the bird shit on the ground and remarked that they would appear in the photos with the birds themselves.  While not aesthetically ideal, I have to admit to thinking that all that shit's good evidence for there being many birds in the area -- so it's not too terrible a thing for it to also be in the images!

Even more pertinently as far as I was concerned was how interesting looking were the birds hanging out in the vicinity of Kwun Tong Pier.  And for the record: since these herons and egrets appear to be migratory creatures, it's not like one gets to see them all the time there.  So as far as I'm concerned, their presence really is worth capturing on camera! :b
Posted by YTSL at 10:50 PM

I, too, had always been under the impression that Hong Kong was a concrete jungle.

Parts of Hong Kong certainly are very urban but I think many people don't realize that there's quite a bit of area beyond just the land surrounding Victoria Harbour.