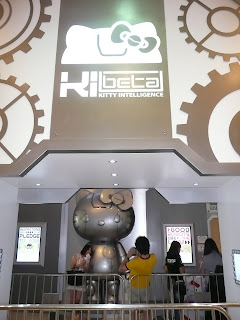 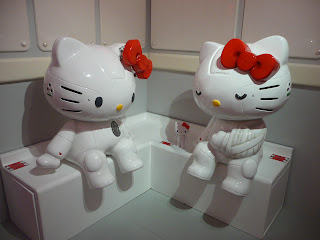 My own (small) Robot K -- see it? -- posing with
a couple of (larger) Robot K prototypes awaiting
attention at the S.R.I. Repair Department 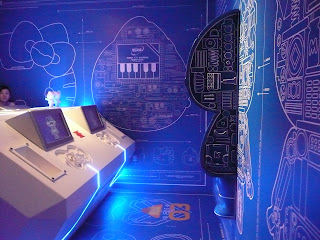 Inside S.R.I.'s aesthetically impressive --
and so it should be! -- Design Department

Another year, another Hello Kitty-themed interactive exhibition! Two years ago, it was Kitty Lab (which I happily went to -- and whose experience I joyfully chronicled here). Last year, it was Who's The Next Hello Kitty? (Cosplay Party) (which I skipped because while I like the furry feline, I actually don't aspire to be like -- never mind become -- her!).

In 2011, we have Kitty Intelligence Beta -- which has participants becoming trainee engineers at the Sanrio Robotics Institute (S.R.I.) established by genius inventor, Kitty da Vinki, the 51st generation member of a line of gifted felines -- the first of whom lived in the early 16th century and was the star student of Leonardo da Hello, a renowned intellectual along the lines of the similarly named Leonardo da Vinci.

At the start of their education, S.R.I. students are paired with their own 20 centimeter tall Robot K (a cool robotic version of Hello Kitty, if you will). They then are sent off to explore what S.R.I. has to offer -- but with the injunction that they can only graduate from the institute after undergoing training in seven departments (Research, Design, Assembly, Component, Repair, Quality Control and Energy).

From personal experience, I can assure prospective trainees that one does not have to pass every department's training test in order to graduate but also caution them that not all the tests may be as easy as one might assume (since I failed two of the seven tests I took!). At the same time, even while it feels rather embarrassing to not have passed all of S.R.I.'s tests with flying colors, no permanent damage was done -- including to my pride and ego -- and I actually did manage to generally have a good time at S.R.I. (despite the whole affair there sometimes literally being an amazing maze)!

If pushed to point to some negatives, I will admit to wishing that the admission fee to Kitty Intelligence Beta had been at least a tad lower and that the Sanrio Robotics Institute's premises were larger as well as not so labyrinth-like. (I could be mistaken but my sense was that it was only half the size -- if that -- of Kitty Lab.) Still, it's also true enough there actually was plenty (of kawaii Hello Kitty-ness) on view at S.R.I. -- and so much so that I could see visitors experiencing major sensory overload if one were to stay there for more than an hour.

Concluding on a positive note, three things that were most definitely an improvement on my Kitty Lab experience of two years ago involved it being so that this time around: instructions, panel information and such were bilingual (in English as well as Chinese) rather than solely in Chinese; visitors were allowed to take photographs -- though, understandably, not indulge in flash photography -- inside the experiential exhibition; and trainee engineers get to keep their personal Robot Ks upon graduating from S.R.I. (whereas one had to sadly surrender the electronic Hello Kitty DNA device that one went around Kitty Lab with upon the completion of that particular participatory experience)!!! :DDD

I love hello kitty too.

Think you would have enjoyed training under Kitty da Vinki too then! :b

Sanrio has some brilliant marketing people--although the 51st lineal descendent of Leonardo's cat must be smarter than all of them put together.

The miniature robot Hello Kitty is a nice touch.

Have to say that I love my Robot K despite it not being a plushie. BTW, I took it to the office yesterday and left it overnight but have brought it home today as at least two colleagues told me that there might be a real danger of it getting stolen by people who would want it for themselves!

Yes, do reckon that there are some geniuses in the Sanrio marketing team -- especially, I get the impression, among those in Hong Kong along with Taiwan and Japan. :)