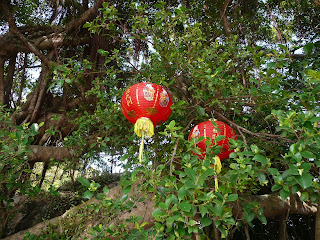 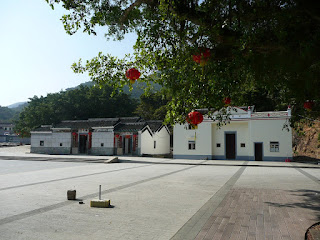 More than two weeks ago, those who use the lunar calendar celebrated a new lunar year of the rabbit. Traditionally for the Chinese, the new year celebrations last for fifteen days -- and on the evening of that fifteenth day, it all culminates in a lantern festival that heralds in the spring and also at times functions as the Chinese version of Valentine's Day.

This evening, however, the weather here in Hong Kong is still too cold (and misty, humid and wet) to feel all that spring-like. And as those who know me know, I almost never am all that romantic inclined. So, rather, than have my thoughts turn to spring or love, I find myself walking down Memory Lane and recalling how, as child in Penang, I loved the lantern festival for it being an occasion which was marked by my parents taking me out to buy a lantern -- and not just any lantern but one which was hand-made from thin wire and a material in between paper and plastic and chosen by myself from what seemed then to my mind to be an incredibly huge design range.

On the night itself, my mother would place a candle inside the lantern and I'd parade the lit lantern about in the garden or sometimes further afield (e.g., at my maternal grandparents' house where I'd join my cousins in an informal parade -- and should anyone wonder why it wasn't my paternal grandparents' place, it's because we lived with them until they passed away as yes, ours was a multi-generational household.) Also, if memory serves me right, these too were nights which would sometimes see me dressing up in brightly-colored "Chinese costume".

But to give you an idea of how long ago all this was, I actually can't remember if that lantern festival I so happily celebrated as a child was the lantern festival that takes place on the 15th night of the lunar new year or the mid-autumn lantern festival that takes place much later in the year! (And what with Malaysia being so close to the equator and therefore having only wet and dry seasons rather than spring, summer, autumn and winter, I don't have any climate-sensitive clues with which to help me narrow the time of the year down!!)
Posted by YTSL at 9:30 PM

Happy Chinese Valentine's Day to you and your family.

What lovely memories! I love the idea of a lantern festival. It must have felt so magical as a child.

Thanks for the wishes. Same to you and yours. :)

Your comments make me glad I wrote my post. Looking at it fresh after writing and become the comments came along, I wondered whether it was too insubstantial compared to my other more fact-based posts. Glad you like it. :)