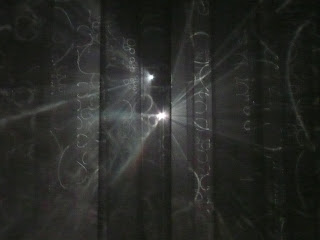 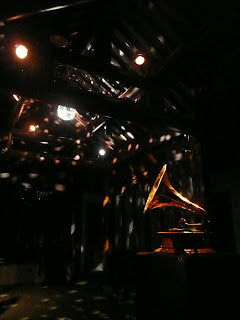 ...and sound and light make for a memorable
Hong Kong Arts Festival evening show
at Kowloon Walled City Park
Make no mistake: the Hong Kong International Film Festival remains the numero uno item on my cultural calendar. But since moving to the Big Lychee, the Hong Kong Arts Festival -- which sometimes overlaps for a few days with the HKIFF but also usually begins a few weeks before it -- is one other cultural fiesta that I have been unable to ignore both personally as well as professionally. (For the record: one of my highlights of 2010 (i.e., best concert) was courtesy of last year's edition of the Hong Kong Arts Festival.) And yesterday saw me taking in not one but two of this year's shows.

In the afternoon, I went to the Hong Kong Cultural Centre for a matinee performance of Birmingham Royal Ballet's very lively and enjoyable Hobson's Choice. Then in the evening, I headed over to the Kowloon City Walled Park -- a 31,000-square-meter park set up in the style of a traditional Chinese garden where the Kowloon Walled City formerly stood -- to check out Power Plant, a show that promised to turn the location into "a magical place where art meets nature".

Although the Kowloon City Walled Park is officially open until 11pm daily, I had previously only ever visited it in broad daylight. So I don't know how atmospheric it usually is at night. Yesterday evening, however, the place definitely felt full of atmosphere along with possibility -- what with the artistic folks behind Power Plant putting up a grand show that makes good use of the Kowloon Walled City Park's existing structures, ponds, flora and fauna along with various introduced elements such as disco balls and lights, flourescent tubes, fire, smoke, vibrating bells and rotating feathers.

To be sure, some sections of this magical mystery tour of a show proved more eye-catching and attention-absorbing than others. And sometimes it was so dark (and the ground wet as a result of rains earlier in the day) that there were places where people seemed more preoccupied with making sure they didn't slip and fall as they moved along the prescribed route through the park than to look around at the often teasing sights and listen to the generated sounds that sometimes bordered more on the eerie than engaging. But, taken as a whole, my feeling is that this was an awesome show -- and a great bargain of an artistic deal at just HK$20 (around US$2.57 or 1.88 Euros) per entry.

Among the sections that particularly impressed were: Kirsten Reynolds' evocatively psychedelic Sights from the Depths, Mark Anderson's colorful Kinetic Flowers and their beautiful reflections on the water of one of the Kowloon Walled City Park's ponds, Jony Easterby's Worm Can which presents alternative, kaleidoscopic views of insects and flora that show up how amazing the seemingly everyday can be, Ulf Mark Pedersen's impressive Japanese-inspired Wabi Sabi shadow, smoke and light installation, and Mark Anderson's climactic Pyrpophones featuring flickering and leaping flames that appeared to be dancing in tune to the "music" of complex sound patterns.

My most major regret about them all -- and the show as a whole -- is that they are ephemeral rather than permanent in nature. But precisely because they are so, I have to admit to feeling all the more privileged to having been there to witness their presence -- and in a park that I already felt special even without these transformative sensory embellishments that will be there only until March 13th.
Posted by YTSL at 10:53 PM

the second photo deceives me that it is a Maori TIKI with the two eyes.

I wonder why the organisers are into putting arts and film festivals so close together -- do they not realize that there might be some overlap in their audience?! :S

Wow... what an imagination you've got! :D