Pigging Out at the Kimberley 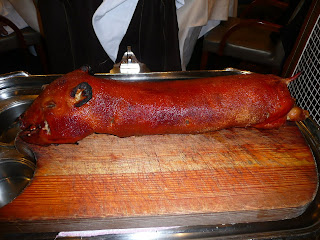 A whole suckling pig all roasted, stuffed and waiting
to be a dinner's piece de resistance 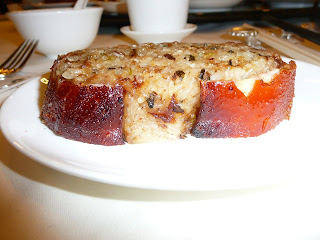 For those who were wondering: in keeping with its
Chinese roots, this pig(let) was stuffed with glutinous rice!
In the middle of this week, I texted my regular hiking companion to tell her that I really wanted to go hiking this Sunday. And it wasn't just because the previous two weekends had been hike-less ones on account of their being on the rainy side either.

Rather, it also was because the past week or so has been a bumper one in terms of pigging out -- what with it including another imaginative omakase meal at Sushi Kuu and a pair of meat-heavy multi-dish dinners at newly opened Japanese restaurants with different friends on two consecutive nights. But the midweek meal that truly got me thinking that I absolutely needed to do some pretty major amounts of exercise this weekend to compensate for my gluttony was one that I had at a Chinese restaurant: to be precise, the Kimberley Chinese Restaurant in the Kimberley Hotel in Tsim Sha Tsui.

With six other diners (all of them female, I will add), I shared two starters, one pot of substantial rich beef and radish soup, a fried salmon skin accompaniment for the soup and a whole stuffed as well as roasted suckling pig. And even while there assuredly were leftovers for people to take home, the truth of the matter is that we all did a pretty good job of stuffing ourselves with the stuffed suckling pig that I've wanted to try ever since seeing the photos over at the Life as a Bon Vivant blog of it along with the other ordered dishes that evening!

As regular readers of this blog will know, I'm no stranger to the joys of eating suckling pig -- including back at home in Penang. However, I actually wasn't previously familiar with suckling pig whose preparation included being stuffed with glutinous rice -- and so much so that despite the descriptive efforts of a foodie friend who loves this pig very much, I needed to view visuals of it to really be able to imagine what it'd be like and start hankering to try out the dish.

After finally getting to do so, I have to state that the pig actually looks more interesting than it tastes. On the positive side, the cook(s) did a very good job of roasting the meat and making it so crispy that you can hear it crunching away inside your mouth as you chew on it. Sadly though, the glutinous rice was less tasty than I'd have liked... and I found myself wishing I could spice it up with some cut red chillies and soy sauce... or a dollop or two of Maggi sweet chili sauce!

Still, it was not like I had any problems polishing off that substantial portion of stuffed suckling pig that was put on my plate. Hence the need to go hiking this weekend... which I am happy to report that I was able to do -- more specifically, on an approximately 9 kilometer long trail in Sai Kung East Country Park earlier today despite the weather being unusually warm for February (and maxing out at 25.5 degrees Celsius in the area and 26.6 degrees Celsius in Hong Kong) this Sunday! :)
Posted by YTSL at 9:41 PM

Yummy. Hiking season with sunny skies definitely opened this weekend! Went for a long walk with my daughter, which was so lovely, just the 2 of us chatting away.

I think stuffed suckling pig is an unusual dish -- and this was the first time I had it myself. With regards to Chinese roasted meats: my personal favorite is actually roast goose. :)

Yummy indeed and re hiking: the hike I went on during Chinese New Year weekend came with sunny and even more blue skies! Glad you and your daughter got to go on a lovely long walk together -- and agree that they can be conducive for chats. :)