What watching movies made me do! 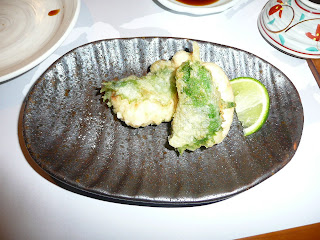 Not your average tempura platter 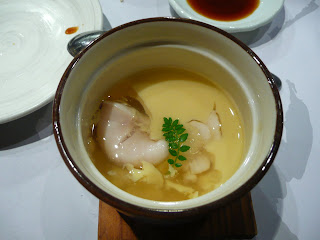 ...nor your average bowl of chawan mushi
Blame it on Departures -- more specifically, the particular scene in the multi-award-winning Japanese movie whose protagonist is a cellist turned nokanshi (embalming master) where the lead character's boss is shown cooking and then consuming a portion of fugu shirako with great relish. For after viewing it, foodies such as a friend of mine here in Hong Kong and myself found ourselves yearning to try eating what is delicately described as blowfish or pufferfish milt and more baldly as that fish's SPERM.

As one might expect, this particular culinary delicacy is actually not something that is readily available -- and not least because it's seasonal. And, as a matter of fact, last year, my friend and I missed out on trying it because we went to a restaurant that we knew served fugu shirako here in the Big Lychee a little after the season for it.

With that missed opportunity in mind, this year, we decided to pay another visit to the restaurant in question (Sushi Kuu) one month earlier in the year than we did last year -- and were ecstatic to discover on the evening we were there to see that the kitchen did have some fugu shirako available. Alas, after the head chef tested it (by literally touching and stirring some of that sperm about in a bowl with his bare hands), he told us that it wasn't fresh enough to grill like had been the case in that memorable Departures scene.

Cue a strong sense of disappointment and feeling of "so close yet so far. AGAIN". Only... a few minutes later, as we dug into first a tempura portion and then a chawan mushi dish set before us, we got to realizing that even though the chef had decided that the fugu shirako was not fresh enough to consume grilled, he had deemed it okay to consume in the form of tempura and as an ingredient in the chawan mushi! So the wait was over -- at least for non-grilled fugu shirako!!

And for those who wonder: it doesn't have a particular strong taste. Rather, what stands out from the experience of consuming this slightly salty-tasting delicacy is its wonderfully soft, creamy texture. Also, like with, say, clotted cream, there is a richness to the fugu shirako that makes the experience of consuming it seem really decadent and threaten to be overwhelming if you have too much of it but come across as quite divine when partaken in small quantities.

So... would I eat it again? Most definitely! Only next time, I really do want to eat it grilled... like in the film!!! :b

I've eaten fish sperm before but I don't know if it's pufferfish sperm. When I went to Japan in Dec, my Japanese friend took us to a nice sushi place in Ebisu and told the chef we were foreigners. He was so excited, he decided to try and serve us things he thinks would be rare or hard to get outside of Japan and fish sperm was one of them.

My friend had a hard time trying to translate the name of the dish for us. That was quite amusing. Hahahaha... :)

The one I ate was quite nice and has a creamy, rich texture too, possibly similar to what you had. I didn't fall in love with it but I won't be opposed to eating it again.

As always, I enjoy reading your posts. Thanks. :)

I'm both fascinated and slightly repulsed. But definitely entertained. I followed your link for "milt," and even googled for photos.

I'm glad you got to try fugu shirako, if not grilled as you'd hoped.

This post makes me ponder what actions I have done specifically because of a movie...I know that I really, really wanted to try Turkish delight as a kid due to a book. (Can you guess which?)

I will have to see if I can find a place here in NY that serves this interesting fish delicacy. I'm sure I could find the human equivalent easily =P

Did the fish sperm look like intestines? If it was small in size, then it might be cod sperm (which I've also eaten). If larger in size, then there's a good chance it was fugu sperm. :)

And yeah, seems a lot of people get embarrassed to call it what it is... :D

Teehee re your reaction to this post. And re the book which made you want to try Turkish delight: sorry, have no idea! ;(

As for the human equivalent: hahahaha at the thought of that tempura-ed, grilled or in chawan mushi!!!! :DDDD

"And re the book which made you want to try Turkish delight: sorry, have no idea! ;("

The Lion, the Witch and the Wardrobe. The White Witch bribes Edmund with Tukish delight, which is so delicious that he will do anything to get more of it.

And by the way, I am right now at work on a group paper that we aim to submit to that conference I've mentioned coming up in Hong Kong in August. (Well, I'm not at work on it *right* now, seeing as I'm typing this comment. But I was moments ago...) Wish us luck! I really hope to get to meet you and explore some of Hong Kong's culinary treats with you. But maybe some slightly tamer ones than that featured in ths post! (I guess it would be out of season, anyhow.)

Here is the link to a photo I took of it:
http://3.bp.blogspot.com/_bW0fpWjW_GQ/TR34BH42bnI/AAAAAAAADTg/76cNPgITcTU/s1600/fish+sperm.jpg

Thanks for replying -- I would never have guessed "The Lion, Witch and the Wardrobe" (not least because, I confess, I haven't read the book -- only watched the animated movie!).

And good luck re your conference paper submission and yes, do hope that we can meet up in Hong Kong should you come over for a visit. :)

Looks like cod sperm to me. BTW, I have a photo too of the cod sperm I ate some time back:-
http://webs-of-significance.blogspot.com/2010/03/would-you-eat-this.html

While the idea of fish sperm seems a bit odd--at least to me--caviar is a delicacy in a lot of places although with a price north of $100 per oz. it never really makes it on my shopping list. Quite yummy when someone else buys it, though.

I know what you mean about fish roe seeming less exotic than fish sperm.

Re caviar: I love it too and salmon roe and mentaiko (marinated pollock roe) fortunately are not as pricey as beluga caviar -- I say fortunately since I simply adore those types of roe! :)