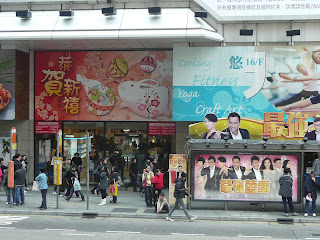 Funny how expectations can so affect one's viewing experiences. That was my reaction upon coming out of my viewing of All's Well Ends Well 2011, a Chinese New Year movie that A Nutshell Review's Stefan S largely panned but which I enjoyed quite a bit -- and actually found touching in parts as well as side-splittingly funny in others.

Aside from his review having helped me to go in to a screening of the movie with modest expectations (despite its this particular offering having its share of big name stars -- notably in the form of the top-billed pair of Donnie Yen and Carina Lau (who I nonetheless felt got less screen time than Louis Koo and Cecilia Cheung)), I reckon that it also helped that as the film unfolded before me, I got to thinking of this comedy in which cosmetics and cosmetics industry staffers prominently figure as a follow-up to Chan Hing Kar's La Brassiere (which had Louis Koo and Carina Lau among its stars), Mighty Baby (with Cecilia Cheung in its cast) and -- with Janet Chun in the co-directing seat -- La Lingerie movies.

For although this Chinese New Year movie's title -- and Raymond Wong's involvement behind the scenes (as producer) and in front of the camera (as co-star) in it -- makes much of it being the sixth in a series of festive comedies whose first edition came out in 1992 (and starred Stephen Chow, Maggie Cheung Man Yuk, the last Leslie Cheung, Teresa Mo and Sandra Ng re Raymond Wong), it actually shies away -- with the notable example of Donnie Yen's character -- from its more family ties and shenanigans format and emphasis. (And the fact that the scenes involving Donnie Yen's family are actually pretty entertaining can make one rue the filmmakers' choice to go along the single generational route for the most part that looks to have become the norm in Hong Kong films of the past few years or so.)

So rather than be a family-oriented comedy, All's Well Ends Well 2011 goes in the direction of having at its center two men who were rivals at make-up school but get on the same side after one of them, who has gained fame and adulation on TV, becomes CEO of a cosmetics company and enlists his talented old make-up school-mate to man the counter in a prime location with demanding customers. And, of course, they both experience love in the movie -- though it is interesting that both those appear to be slow-burn affairs rather than ones that involve instant sparks and high tension excitement.

As the TV personality who deliberately cultivates a metro-sexual (even stereotypically homosexual) vibe, Louis Koo is great fun to watch and Donnie Yen does much better than one might expect with a role that has him approaching the art of make up in ways that definitely do bring to mind his roles as a martial arts master. Cecilia Cheung also acquits herself well in a good role as a lass whose personality is more compelling than her looks -- and shows once again that she's got a smile that can brighten one's day upon catching sight of it together with an amazing ability to come across as utterly genuine when she lets the tears flow.

On a less positive note, Carina Lau looks to be coasting in her role of Donnie Yen's character's writer love by posing more than truly acting once again -- something I have come to expect post seeing her in Jiang Wen's Let the Bullets Fly, Stanley Kwan's abysmal Showtime and, also, Tsui Hark's Detective Dee and the Phantom Flame. (As an aside: how ironic as well as disappointing it will be if she finally wins the Hong Kong Film Awards' Best Actress prize this year after not being justly rewarded in previous years for her marvelous work in such as Intimates, Forbidden City Cop and Girls Without Tomorrow.)

In addition, I'm not sure how deliberate it was but Raymond Wong really does get thoroughly out shone on screen by not only Louis Koo and Donnie Yen but, also, Ronald Cheng (who prominently features in the movie's very funny mahjong-playing scene) and -- most obviously -- Chapman To. Although his is technically more of a supporting character than main role (and his first appearance in the movie comes relatively late in the work), this guy gets my vote for generating the most laughs in the movie as a whole -- and while the scene in the nightclub is definitely more eye-catching, I have to say that my favorite part of the whole movie involved his dinner date with Cecilia Cheung's character in a Maxim's MX fast food outlet (which his rich man character had difficulty realizing has different dining "rules" from a "proper" restaurant).

Another development I found interesting was how, although there was a perceived need to include Mainland Chinese thespians (notably in the form of actresses Yan Ni and Lynn Xiong) in this very Hong Kong form of movie, they weren't given particularly great roles -- both in terms of amount of screen time and, also, in terms of character "likeability". At the same time though, there is a scene involving Yan Ni together with Louis Koo, a cameo appearance-making Paw Hee Ching and a little girl that successfully tugged at my heart-strings and brought happy tears to my eye.

In conclusion: even if this movie didn't leave me feeling all's completely well with the world, it did make me feel good as well as generate quite a few laughs during my viewing of it. So even if a bit uneven and not immaculately polished, I'd count it as a pretty successful Chinese New Year movie as well as generally enjoyable comedy that I'm happy to have caught so early in the new lunar year of the rabbit. :)

Thank you for this review. I'll be on the lookout for the dvd.

I love Cecilia Cheung and it would be good to watch her on screen.

And Louis Koo is an actor I like in comedies better than dramas.

So Donnie dislike is outweighed in this case by your reco :)

I agree with your preference for Louis Koo in comedies over dramas. And since you like Louis Koo, you might also wish to check out "Mr and Mr Incredible" which gets by based on his and Sandra Ng's star power and chemistry. :)

Re Donnie dislike: I think that it's best to steer clear of films in which he's action choreographer as well as star -- but otherwise, he's quite okay lah! ;b

I love the idea of Donnie Yen involved with cosmetics...will watch for this one!

hello, if not mistaken, this is the 2nd sequel to the 2010?
by the way, can you drop me an email? reanact(at)gmail.com

I think you'll enjoy it... especially if you remember/liked Donnie Yen in something less macho than he now is associated with (e.g., "Wing Chun" (1994)). ;b

With regards to dropping you an e-mail: er... can we just continue on this thread or is is something personal -- as in have we met before in "meat" space, do you reckon? ;b

Thx for the review. Was this Cecilia's first film since the "photo shoot"? Movie sounds like silly fun.

You're welcome re the review (and BTW, if you root around, I also have reviewed "I Love Hong Kong" on this blog *hint* *hint*!)