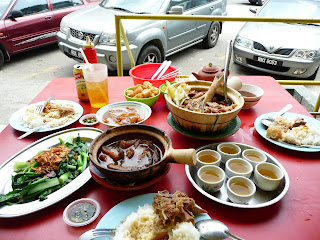 An open air feast of bak kut teh and more
(including green veggies, sea cucumber
and complimentary Chinese tea)
* picture taken on my camera by Kit Liew! * 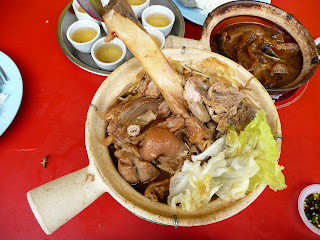 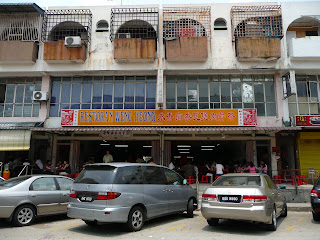 The well-patronised bak kut teh restaurant --
one of several in the area -- that we opted to eat at
and have no qualms recommending to others
As I write this blog, another Typhoon Warning Signal No. 8 is effect [*update: yikes, it's now Typhoon Warning Signal No. 9!!!*], with the typhoon/tropical storm that's due to pass really close to -- or even actually directly hit -- Hong Kong later today bearing the name of Nuri.

But rather than worry too much about it (though, to be safe, I've done as advised and fixed adhesive tape to the large window panes in the front of my apartment and did some extra food shopping last night!), I'm going to cast my mind back to this past weekend and my visit with two friends -- including the blogger behind Falling Leaves Are Heavy -- to Klang, the Malaysian town known as the birthplace of bak kut teh (literally translated from Hokkien as "pork bone tea").

My childhood memories have it that bak kut teh tended to be consumed as a hearty breakfast by people after they had gone for an early morning walk or in the wake of a tai chi session. In more recent years (especially during the two years I lived and worked in Kuala Lumpur), however, I've found that it is also happily consumed for brunch, lunch or dinner, and without a hunger-inducing exercise session needed in order to whet appetites for this delectable dish that is one of quite a few Malaysian ones that may bear a Hokkien name but actually is not native to China.

For all of my years of experience consuming bak kut teh, however, this past weekend was the very first time I did so in Klang itself. For this, I have to thank my friends -- who are fellow foodies but, unlike me, love to drive! So I'll excuse one of them regularly referring to me as "my geeky friend" on his blog and make up for his being too shy to bring a camera and photograph the food by putting up photos of what we ate for brunch this Sunday. So... delicious looking, eh? And yes, it really was very tasty indeed! :)

Hmm. That pork soup does not look as good to me as the assam laksa did. And, ironically, my coworkers and I are probably going to take a long lunch today to go to Penang restaurant.

What are the other dishes there on the table in your picutre?

Somewhat ironically, forewent eating some more of my favorite Penang laksa in favor of bak kut teh -- and hanging out with my Kuala Lumpur friends -- this past weekend! And I can see how bak kut teh doesn't look as good -- what with it being less colorful, etc. But if you're into meat, it's great... especially with rice and a lot of the accompanying stuff you saw on the table (notably rice, sliced green chillies in soy sauce and pieces of eu cha koay (Hokkien)/yau char kwai (Cantonese)).

As for the other dishes on the table: the smaller claypot contains sea cucumber, the bowl pork tendons... and the veggies, rice with portions of bak kut teh and tea should be self-evident, right? :b

the bak kut teh is really to die for but the colour doesnt really come true. the rice is really magnificent. if we can have a closed up shot of the rice, we will see how each little rice has just the right amount of water with it giving it just the right surface tension, making each bite a wonderful experience.... ;-)

I don't think it's the fault of the camera or photo-takers re the bak kut teh color. The thing is that it is rather brown. But the rice... yes, well, maybe I should have gone for a close-up shot of it (even though I don't worship rice the way you do)! ;b

Well, my Japanese coworker got it today at the Penang restaurant here in Maryland and she liked it. I tasted it but I played it safe today and got my favorite baby oyster omelet and an eggplant dish.

And, Bo Bo Cha and Chendol for dessert!

Not quite the spread as in the picture, but pretty good for a workday lunch! LOL!

Ironic that your Japanese worker liked the bak kut teh at a restaurant named Penang as Penang (the state) isn't all that great for bak kut teh! (BTW, is that Penang a branch of a chain that also has branches in New York and Philadelphia?)

A question: Did you guys have the bak kut teh with rice and pour the soup on the rice? That is VERY key to the enjoyment of bak kut teh as far as Malaysians are concerned!

As for baby oyster omelette: Had that one night. Unfortunately, didn't bring a camera with me for that meal! And bubur cha cha and c(h)endol: Urrgh, I'd pass. Too coconut milky for me! ;S

I've been told that this Penang is connected to the one in Philly -- the same coworker used to live in Philly and said that she knew the one up there.

No, the bak kut teh was served like a soup -- I don't think she got rice -- poured over rice sounds much more appealing for some reason!

All I could think when I saw the bak kut teh is that it looked like something that Anthony Bourdain would love (since he's the big fan of all pork dishes)!

The bak kut teh looks very tasty! Looks like a good variety of meat from different parts of the animal.

Does the rice glisten? I noticed in Japan the rice glistened and I could see each piece of rice individually. I've been trying to duplicate this in my rice cooker at home with so so results.

I used to frequent the Penang in Philadelphia myself. Think things vary from branch to branch (have also visited Penangs in New York and possibly not officially connected ones in Chicago and Atlanta) but funnily enough, bak kut teh was one of the Philadelphia branches' better offerings.

Re bak kut teh: It *is* a soup. You just have to know to order a portion of white rice to go with it and then pour some of the soup onto the rice like you would gravy.

And yes, it is very "porky"... not what one would expect out of a Muslim (majority) country, right? ;b

But well spotted re there being many different animal parts in the bak kut teh mix... ;b

Am not sure about the rice glistening but you definitely can see each rice granule distinctly. Hmmm... maybe you use too much water when cooking rice? Also, it depends on the rice you're using -- for regular meals, long grain is better while short grain is glutinous rice that's better for cakes, etc.

hehe...But I really have no intension of calling you that again but I thought it was funny in the context of your entry...

Not to worry. No insult taken. Was just having some fun with you... as I think you can see from my Geeky?? entry. :)

Yeah, I guess most of the Malaysian hawker food don't look very impressive because there's not much presentation. But to every Malaysian, our local food always taste better than what it looks. Substance!!! Eh, and why say I took the pic lah. So embarassing.

Despite what you say about Malaysian hawker food and presentation, Glenn seems to have liked my picture of the laksa assam that you and I love so much... And *of course* I have to credit you with the photo: You took it, after all! :)