This past Monday, I was supposed to start my new job (having departed from bc magazine even though its current issue contains reviews of Cyborg She and The Edge of Love by me). What with my having to wait until today for the authorities to approve my work visa extension, however, I ended up spending it at leisure -- over the course of which I decided to go up to Lantau Island's Ngong Ping Plateau on the Ngong Ping 360 cable car to visit the Big Buddha and Po Lin Monastery (and then down to Tung Chung by bus and the rest of the way back home by MTR).

Although I had been up Ngong Ping before, this was some years back before the cable car service had come into being and other developments had taken place in the vicinity. Something that was of interest to me was how, post having gone on my share of hikes in Hong Kong, I now could see the start and end points for several hiking trails in the area.

On a more emotional note, while exploring the space inside of the Big Buddha, I unexpectedly came across tributes to the late Anita Mui and got to recalling that her tablet (and remains?) appears to be interred at that site. Rather than end on this sad note though, here's also pointing out that two Hong Kong movies that I positively associate the Big Buddha with are Infernal Affairs III and Three Summers -- both works that are interesting in their own way and, coincidentally, have a star in common in 'Little Tony' Leung Chiu Wai... ;b 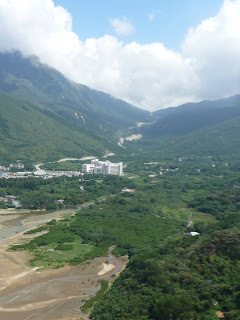 Later in the afternoon,
I would descend by bus on the road in the picture... 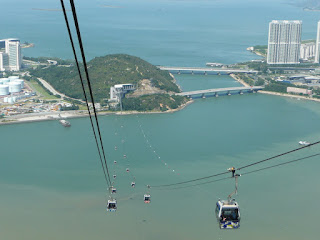 ...but first up was the approximately 15 minute ride
by cable car from Tung Chung up to Ngong Ping 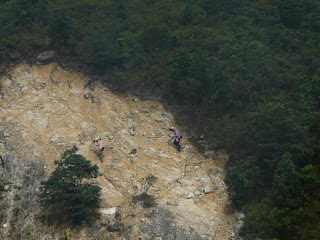 Among the more amazing sights from the cable car for me
was that of women hard at work on the mountain edge! 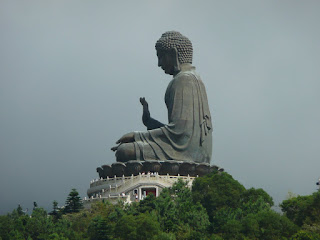 Then there was the awesome sight of the Big Buddha itself 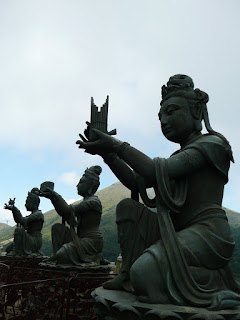 Although they're mere specks in the above photo,
these permanent devotees to the Big Buddha
are actually pretty impressive in their own right 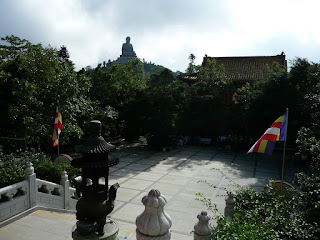 View of the Big Buddha from Po Lin Monastery 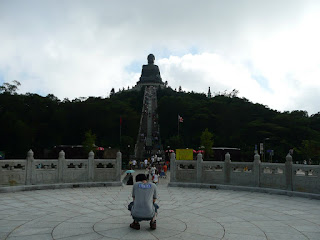 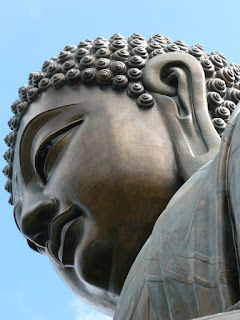 The one picture of the platform with the steps looks vaguely familiar as well -- was that used in Anna in Kungfuland or some other similar weak film?

I would imagine that both Leslie Cheung and Anita Mui still inspire fans over there to remember their work -- especially since they were huge stars in both film and music.

The cable car ride looks like fun. What a hard job the women working on the side of the mountain are doing!

I've seen Anita Mui's plaque at the Lantau Buddha and was quite moved by it too. When I saw it I remembered that I'd read an article a long while ago (so long the details are vague) before she died that she was a supporter of the Buddha.

The Lantau Buddha (made in Nanjing) is my favorite outdoor Buddha. The Kamakura Buddha is second.

I've watched the "Infernal Affairs"scene several times where Chen Dao Ming (so handsome) was talking with several men by the apsaras.

If I had to choose one place to visit while in Hong Kong the Lantau Buddha would be it!

One of the all time great movies of course to take place not only on Lantau Island and not only at the Giant Buddha but in fact inside the Giant Buddha is Tsui Hark's/Van Damme's classic film Knock Off! In their brilliance, the CIA has their secret headquarters set up inside where none of the thousands of tourists would ever suspect them of being.

When I take people to the big buddha, I always point out the Anita Mui plaque. Sadly, they usually have no idea who she is =_=

Of course, in Knock Off, not only do they have the super secret CIA headquarters in the buddha, Tsui Hark also have the cajones to blow it up with green flames.

And do spill a little bit about the new job?

Yes, new job! And yes, it does still involve writing and the arts (and a bit of cinema -- though more art house than anything else now).

As for your movie query: Sorry, don't remember anything like this from "Anna in Kungfu Land" -- but, then, wouldn't consider it a memorable movie!

And yes, Leslie Cheung and Anita Mui still have a considerable number of fans. Each year, there continue to be significant Leslie Cheung commemorations on April 1 and I know of at least one committed Anita Mui fan who regularly comes from the USA for certain of her anniversaries.

The cable car ride *was* a lot of fun. Longer than I envisioned as well as pretty spectacular and scenic!

"If I had to choose one place to visit while in Hong Kong the Lantau Buddha would be it!"

Am not sure I can narrow a choice of such to just one place! OTOH, the first few times that I visited Hong Kong, I always made sure to spend the first evening at the promenade near the TST Star Ferry and HK Cultural Centre... :)

Goodness me re your "Knock Off" revelation! And yes, that's yet another of the director of "Peking Opera Blues"' movies that I simply don't care to check out... ;(

Who are the people you go take to the Big Buddha? Surely not people who are all that conversant with Hong Kong movies or music!

More re my new job: Hint -- it's with a newspaper whose website requires paid subscription... ;b