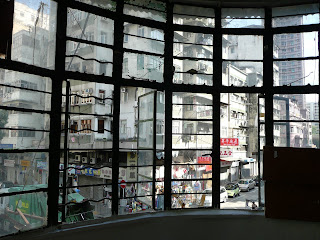 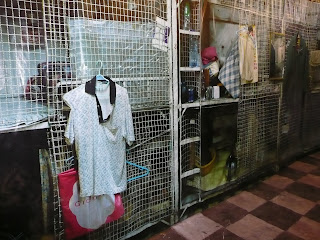 Part of the exhibition housed at 55 Kweilin Street
until the end of this week that includes displays of
'cage homes' that still exist in Hong Kong
As those who know me know, I cannot claim to be a particularly religious person. This fact notwithstanding, there definitely are times when I have been moved to muse that "There but the grace of God go I". One such occasion was this past week, when a friend and I went to Sham Shui Po, a colorful but also notoriously low income West Kowloon district, to take in the Society for Community Organisation (SoCO)'s Our Life in West Kowloon II exhibition housed in a 50-year-old tong lau that will be torn down by the Urban Renewal Authority later this month.

In his Streets: Exploring Kowloon (Hong Kong University Press, 2007), Jason Wordie wrote that: Sham Shui Po is where Hong Kong's steadily expanding income gap -- internationally acknowledged as one of the widest in the 'developed' world -- is immediately apparent to even the most casual observer. In Sham Shui Po, it is not uncommon for a family of five to live in a cubicle the size of a small bedroom in a subdivided old tenement, with shared kitchen facilities and no private interior sanitation... (Pg. 149)

A few pages earlier, he also had shared that in Sham Shui Po (and neighboring Tai Kok Tsui), there are: ...a number of dingy tenements which contain individual 'bed shape' dwelllings that are literally the size of a single bed. Known as 'cage homes', these bed spaces are stacked up in tiers and caged in for security. In order to enjoy any fresh air, open space, sense of privacy and relative quiet at all, the 'cage home' occupants -- mostly elderly single men -- must head downstairs and out into the streets. (Pg. 141)

Examples of these cage homes and their occupants were captured on film in Jacob Cheung's Hong Kong Film Awards Best Picture-winning Cageman (1992) which recently was shown as part of the Hong Kong Film Archive's Care for our Community program. (I bought a ticket to a screening of the dramatic offering but, alas, ended up having to work late that evening... :S ) (On another Hong Kong cinema note: Derek Kwok's The Moss (2008) was filmed in Sham Shui Po and attempts, among other things, to provide a sense of the area's contemporary flavor.)

And on a hot Hong Kong summer afternoon, I got to have a non-cinematic taste of the conditions in a building that has housed apartments lived in by whole families that are as small as 70 square feet in size and, also, a sanitized but still shocking glimpse of caged dwellings. But even while horror is one of the emotions one cannot help but feel when taking in such sights, I really did come away too with a lot of respect and admiration for the fortitude of people who are survivors in and through situations where many of us would just plain despair or never be able to live through. And most definitely are as much a part of Hong Kong, Asia's World City, as the economically way better off tycoons, tai pans, tai tais and other people who also qualify to be called Heung Kong yan (Fragrant Harbour people).
Posted by YTSL at 12:07 PM

Wow, I'd never heard of cage homes. How unsettling.It is amazing the range of conditions that people live in.

I'm not surprised you haven't heard of the cage homes. Also, it really can come as a shock -- including to my friend who I went to the exhibition with -- that in this day and age in Asia's World City, such exist. And thanks for appreciating this post -- it's somewhat different in tone and subject matter from my usual blog entries but...