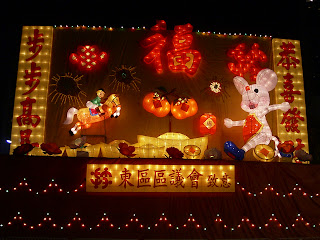 Similarly, the reason why you see the same years get variously described as those of the goat, ram and sheep is that there's just a single Chinese word for all of these horned creatures. (And while, say, Bahasa Malaysia is not the same -- in that goat(s) are kambing in that language while sheep are referred to as kambing biri-biri -- I think it instructive that that same word, kambing, also refers to mutton and that the Malaysian understanding of mutton is that it can be either goat or sheep or lamb meat...)

With that linguistic issue settled, we now turn to why the Chinese New Year display in the photo at the top of this post also features a horse (and rider). Should you think so, it's not because the previous zodiac year was that of the horse. (For the record, it was a pig -- or boar (again, the Chinese don't distinguish between the two animals) -- year.) Rather, it's because 2008 also is the year of the Beijing Olympics and Hong Kong will co-host Olympic equestrian events with China's capital. (And yes, some people over here are very excited about this!)

In any event, here's taking the opportunity to wish this blog's Chinese readers -- and interested others -- a happy Chinese New Year. (And for those who are living in territories, like Hong Kong, where Chinese New Year is a public holiday: Happy holidays!)

Additionally, while you await more new writings (and photographic samples) from moi: should you not have checked out the previous year's more detailed entries about this festival, here's directing you over here and here for what I hope makes for more for your reading pleasure. So... happy reading? :)

I'm glad to learn that we consider this year of the rat or mouse.

And Happy New Year to you!

Thanks, and hope you have a happy one too! :)

Thanks, for the new year wishes and also for the link to your rats post! :)

And a happy new year to you too, if a little late.

No, you're not late at all as Chinese New Year lasts for 15 days! :b