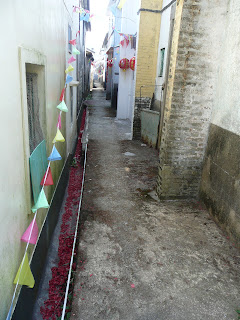 Red signs left on the ground that firecrackers had been
let off in the vicinity to celebrate Chinese New Year
Less than a week from now, it'll be Chinese New Year. More specifically, that which is 18th February 2007 according to the Roman calendar will be, for the Chinese, the first day of the year 4705 as well as a New Year of the Pig (or, as it is increasingly known in Muslim majority Malaysia, Boar).

Weeks before, preparations for this festive occasion already kicked off in earnest. For example, Chinese New Year gift hampers and oranges (called kam in Hokkien, Cantonese and related Chinese dialects -- the same, give a tonal difference or two, as the word for "gold"; hence, to give oranges can sound like and symbolize the giving of gold) galore have arrived at our house.

Ditto with the commencement of a bout of the Chinese equivalent of "spring cleaning". This in part because it is considered bad luck to do any cleaning during the Chinese New Year period -- since the sweeping away of anything during this time is seen as symbolizing the "sweeping away" of wealth and luck. But also because one does like to have a clean abode to welcome visitors into during Chinese New Year! ;)

The days before Chinese New Year also are when politicians are apt to get all "fatherly" and issue bits of what they consider to be sage advice to the people. Hence my opening the newspaper this morning to find an article entreating young Malaysian Chinese to learn the meanings of traditional Chinese practices. And it's in the spirit of that piece that I've decided to dedicate today's blog entry towards detailing the following traditional Chinese New Year practices and their meanings:-

1) Chinese New Year greetings: Such is the hegemonic influence of Mandarin that these days, even non-Mandarin speakers are likely to wish each other Gong Xi Fa Cai, a phrase which effectively translates into English as "Wishing You Prosperity and Wealth". However, time was when I was more likely to hear the Cantonese Kung Hei Fat Choi (which actually possesses the same meaning as the popular Mandarin greeting) at the start of a new Chinese year.

Still, come next Sunday, I'm sure that I'll also hear the Hokkien equivalent of Keong Hee Huat Chai heartily issue at least from the mouths of older Penangites. (By the way, the preponderance of Hokkiens among the Filipino -- and Filipina -- Chinese can be seen not only by former President Corazon Aquino being ethnic Hokkien but also in the President of the Philippines, Gloria Arroyo, tending to issue Chinese New Year greetings in Hokkien.)

2) The wearing of red clothing: According to an ancient Chinese fable I learnt about years ago, a dragon which threatened a Chinese community was found to be scared of -- and eventually warded off -- by loud sounds and the color red. For this and other reasons, the Chinese have come to consider this vibrant color to symbolize good luck and prosperity. And, in turn, this why Chinese folks go ahead and clad themselves in red clothing during Chinese New Year.

On a personal note: I must admit that this is the one Chinese New Year custom which I 've always made a point to observe -- even when living in places (like deepest, darkest West Philadelphia!), where I was unlikely to come across (m)any other ethnic Chinese. At the same time though, I have to say that, unlike some other people, I have drawn -- and will continue to draw -- the line as far as wearing red underwear is concerned! ;D

3) The letting off of firecrackers or fireworks: Another traditional Chinese New Year custom designed to scare away evil creatures, spirits and bad fortune; in this case, one which, according to a Chinese news article, has "a nearly 2000-year history based on textual research." This fact not withstanding, there's been a firecracker ban in many parts of the world where Chinese people live -- including, for several years, some parts of Mainland China itself as well as my native Malaysia.

If truth be told, I can see both sides of the firecracker ban argument. This since I both enjoy fireworks displays, especially as a child, but also have had the rather scary experience of having a firecracker thrown out of a car in my direction by a thoughtless American Independence Day reveller. However, it seems that there's a way out in terms of allowing less dangerous fireworks (e.g., sparklers and similarly small novelties) to be used to herald in Chinese New Year. And that, indeed, is precisely what the authorities have gone ahead and done in this country...

(To be continued tomorrow on account of this already being quite a lengthy entry!)

Gong Xi Fa Cai!!! May the coming Year of the Pig bring you peace, prosperity and happiness. =)

I've already been busy gorging on CNY goodies already and made the traditional tip to Chinatown last night. Had several pieces of Bak Gua and had my first Lo Hei (http://en.wikipedia.org/wiki/Yusheng) of the year just this afternoon.

Off to do more CNY shopping and atmosphere soaking later. Have a good CNY. =)

This is wonderful. I love reading about holiday traditions. I look forward to the sequel. (And I'll have to see if I can find some red clothing-it's not one of my usual colors!)

Gong Xi Fa Cai to you too! And oh my re your already gorging on Chinese New Year goodies!!! :b

I'm glad that you enjoyed this particular blog entry and hope that you'll enjoy reading tomorrow's as well. :)