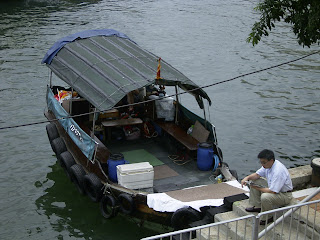 Quiet time by the harbour in Hong Kong
I was recently among the people tagged by A Changing Life's a. for this meme. I found her blog entry on this subject to make for interesting reading and can but hope that mine will prove to be the same to at least some of this blog's visitors.

Like many others who was born and spent the better part of her childhood in a British Commonwealth country, I read tons of Enid Blyton. However, for added interest (and since I've already previously blogged about them), am going to refrain from naming any books by her or the two other favorite female authors from my younger days. Which makes things a bit difficult, seeing as that eliminates so many works! Additionally, these days, I find myself once again residing in a different part of the world from the bulk of my personal library. Still, here goes:-

Four authors I will read again and again

I'm going to take this category to mean authors who I've got more than one book of (rather than just authors of books I read again and again). Again, have made things more difficult for myself -- but, hopefully, more interesting for regular visitors -- in that rather than repeat what I've previously written on this blog, I'm going to go for some more 'new' (at least for this blog) names here...

Figuring that I might as well go for the big rather than obscure names here...

I'm going to take this category to refer to books I already bought copies of but have not yet gotten to reading...

The four books I would take to a desert island

Three of these books I love and read many times; one of these I've yet to finish but like enough of what I've seen thus far -- and since I figure I ought to bring something to a desert island that's new to me along with old favorites...

The last lines of one of my favourite books.

This is the city
with a history
unforetold.

As for tagging: I'd like to see the following four's take on the Four Books meme:-

you are throwing down a book challenge to an English Lit grad?

I should ask why you didn't like Howard's End (the film)?

I liked it quite a bit at the time -- saw it some 10 times in the theaters in DC even -- but now have almost zero interest in it.

I recall that the film of Where Angels Fear to Tread was better overall.

And I enjoyed Forster without ever having to read him in college -- read on my own -- but did not enjoy Journey's End (is that it?) at all.

On Pooh: I grew up on Disney films as a kid and when I got older and read the actual works, felt that I had been cheated in many ways.

Disney had Disneyfied complex works like Peter Pan and Alice in Wonderland.

But with Pooh, I think the Disney version -- the original ones with Sebastian Cabot narrating -- is pretty good.

In fact, I'll go out on a limb, and say that those are to date the best Disney adaptations out there.

Sebastian Cabot's narration of those films and his voicing of the panther in The Jungle Book film really captivated me when I was about 3 or 4.

So now I have this weird love/hate with those Disney films -- cheated out of ever being able to read Peter Pan without seeing those images in my head.

And Bambi is a FAR better book than the Disney film (which I admittedly think is a kind of masterpiece).

Think invitation, not challenge! ;b

Re "Howard's End": Because it left out my favorite quote of the whole book "Only connect..." Also, there's no Royal Albert Hall scene -- the one where the Schlagel's personalities get revealed by their different reactions to Beethoven's Pastoral Symphony. :S

Re Pooh: Actually, I specifically meant that I prefer the non-Disney illustrations themselves. As for the Disney films' general execution: Yeah, it's okay, I suppose but my favorite Walt Disney movie actually is "Robin Hood"! ;)

Right, the film of Howard's End had that concert scene early on but it only introduces the characters without any details about their feelings.

The line is indeed missing, though, even as the filmmakers tried to convey the meaning otherwise.

I think Robin Hood was one of the last first run Disney features I saw as a kid -- everything else was a re-issue of a classic or something I was too old to enjoy.

In those days, it was a big deal because the features only came out every 7 years -- no video or cable of course.

I fondly recall playing this Robin Hood record over and over -- I remember that more clearly than the film.

Oh, come on, YTSL, read "Pride and Prejudice" for heaven's sake! And then watch the 1940 movie of it starring Greer Garson and Laurence Olivier. You won't regret it.

Actually, the film substitutes the concert scene for a lecture in a smaller setting. As for the absence of "Only connect...": Dammit, it's the line that sums everything up! Still, "Howard's End" is not the worst film adaptation of an E.M. Forster book that I've seen. Instead, that "honor" goes to "A Passage to India".

Sorry but I don't trust you enough on such matters with regards to the "you won't regret it" promise! ;(

Oh, and somehow your comments got me remembering another famous author whose books I've tried more than once to enjoy but find that I can't: Charles Dickens!

Yeah, the Pride and Prejudice with Greer Garson is a great Hollywood film but has little to do with the actual book.

I mean, I like the Ronald Colman Tale of Two Cities but it still pales mightily next to the actual book.

Same with all film versions of Dickens that I've seen -- all good films but none as complex as the actual novels.

As I said on my blog, Grapes of Wrath was the only film that I thought was better than the original novel.

So sorry to have been so late to get over here. It's been a particularly arduous time at work, and I'm coming home and collapsing. I'll be back shortly when I've had time to "study" your list:) but I'm already shouting to myself "Oh how did I forget that one"!

More re Dickens: I find that if I read a page or two at a time of his writings, I enjoy them but the entire books are just too much. OTOH, I'm quite okay with George Elliot and very much enjoyed the gigantic "Middlemarch". So go figure? ;S

No need to apologize and thanks again for tagging me for this meme! :)

I'm back, with my thoughts at least partially collected :)
Winnie the Pooh, I don't know why I didn't think of it , and I couldn't agree more about the illustrations.
Jane Austen never will be read again - how could you! I have to say I much preferred Pride and Prejudice out of them all.
Sophie's World - it was one of those books that made me feel I ought to be taking notes. The whole thing was quite weird.
Whispers and Moans - I've heard of it but it doesn't appear to be available as a book in the UK. It looks as though there will be a DVD next month though.

I've really enjoyed reading your selections, and now off to look at the people you've tagged :)

Sorry to be so slow to comment. I'm a bit overloaded these days...

And I totally, heartily, completely agree about the classic Pooh illustrations being superior to the Disneyfied ones.

Hmmm... there seems to be quite a few fans of Winnie the Pooh, and Jane Austen, among this blog's readers! ;D

The DVD of "Whispers and Moans" is already out over here in Hong Kong. Maybe you might wish to buy it from a Hong Kong/Asian online video store?

Yeah, I read your "overloaded" posts... so am doubly glad that you've decided to participate in the meme. :)

I've never read Winnie the Pooh. Perhaps I shall.

I've read all of Anchee Min's works. Princess Orchid and Becoming Madame Mao are the best, imo. Sa Shan's Empress was pretty good. It's like a Princess Orchid.

I also couldn't get into Charles Dickens which was tough bc my grade school English teacher had us studying his novels.

If you like children's books (especially those involving animals,
"real" and nursery ones), then "Winnie the Pooh" should worth checking out even now.

Re Anchee Min: "Becoming Madame Mao" seems to be highly recommended. It might have to wait a bit since after reading a book called "Chinese Lessons", I now feel compelled to read more about Mao himself first... :)