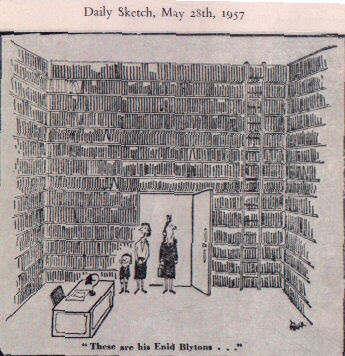 Enid Blyton is the author of some 800 books
(including the Famous Five and Malory Towers series)
First, an update on my acupuncture treatment and its surprising side-effects: At the beginning of this new week, I decided to continue for at least a few more days with the acupuncture. So yesterday, I had more pins stuck into me. Four to be exact.

At times like these, for all of my being a film fan that some might describe as of the somewhat rabid variety, it's books -- not movies -- that I turn to for entertainment and comfort; and books which I've read before at that. Right now, my concentration's not too bad -- just my energy level -- so I've been re-visiting one of my favorite crime novelists. (Linda Fairstein, for those who would like to know.) However, if things were really bad, I'd turn to favorite books from my childhood.

In any event, I got to realizing that the tomes from these two favored genres that I'd turn to in my hours of need all happen to be by women writers! And since some, even if not all, of them may not be familiar to many of this blog's readers, I figure that I might as well devote a couple of entries to introducing and discussing a few of them to you good folks.

For today, I'll focus on my three favorite children's book authors. So here they are (in order of my own introduction to their works):-

1) Enid Blyton (1897-1968): This amazingly prolific writer is, according to the United Nations Educational, Scientific and Cultural Organization (UNESCO)'s Index Translationum, the fifth most translated author in the world (less so than such as Agatha Christie and Vladimir Lenin but more so than -- to name a few individuals -- William Shakespeare, Hans Christian Andersen, the Brothers Grimm, Stephen King and Pope John Paul II).

Although she also did such as contribute entries to the Encyclopaedia Britannica, this English writer was best known -- all over the British Commonwealth (but, I was surprised to find, not the U.S.A.) -- for her children's books. Not without her share of controversy due to her books containing characters which some consider racist (e.g., golliwogs in her nursery tales and funny French teachers in her boarding school stories), I still will maintain that she it was who played a major plus early role in sending along the path to -- is this a word? ;D -- bookwormery!

2) Louisa M. Alcott (1832-1888): Say the name of this 19th century American author to most bibliophiles and one book in particular, Little Women, will come to mind. A true children's classic, this 1867 work has not only been translated into many languages but also spawned film adaptations; the most recent of which starred Winona Ryder and the most famous of which had Katherine Hepburn playing Josephine "Jo" March.

Strange as it may seem though, I actually preferred the popular novel's two more male-filled sequels, Little Men and Jo's Boys, to that which got the "March Family Saga" going. (Alternatively, I find it altogether appropriate that Good Wives -- the book which came in between Little Women and Little Men -- is the work by this life-long spinster which I found the least attractive!)

3) Elinor M. Brent-Dyer(1894-1969): Like Ms. Alcott, Ms. Brent-Dyer's most famous works featured characters named Josephine (or Jo, for short) and Margaret (although in the latter case, she gets nicknamed Madge rather than Meg). (And yes, I don't think this was an entirely coincidental development!) Unlike Ms. Alcott -- and more like Ms. Blyton -- however, Elinor M. Brent-Dyer was English and she contributed a great deal to that very British literary genre known as the boarding school story.

In particular, this particular author is best known -- and beloved even -- for her Chalet School series of 58 (some say 59) books; some devoted fans of which have banded together to form an official Friends of the Chalet School group. And while I'm not a paid up member of that association, suffice to say that I like the highly addictive Chalet School books so much that I've been inspired to go visit some of the locations -- namely, those in the Austrian Tyrol, Bernese Oberland and Channel Islands -- which are associated with them! ;b

Regarding crimewriters...Have you read Carol O´Connell´s Mallory series? Starts with Mallory´s Oracle. Should be read in the right order. Mallory ROCKS. No question about that. I think Carol O´Connell ought to clone herself so that there could be a new Mallory novel at least every month. So there.
Then we have Denise Mina, Natsuo Kirino,Iris Johansen, Lisa See to name a few greats. Will check out Linda Farstein who´s new to me.
And please take care of yourself!

Thanks for the recommendations, many of whom I'm unfamiliar with!

Re Lisa See: Have been meaning to check out some of her crime novels; in particular those named after a real-life Chinese heroine named Liu Hulan who I've seen a 1950 Mainland Chinese propaganda film about. (But, alas, the only one of her works which I've seen in Malaysian bookstores thus far is the non-crime drama "On Gold Mountain:The One-Hundred-Year Odyssey of My Chinese-American Family.")

BTW - I hope you haven´t run into an evil taoist priest who´s trying to sap your beauty through his needles only to give it to his evil aunt: Or worse - maybe he´s destroying your Kung Fu!!!
Sorry. Again - Do take care! And read Mallory.

Is that you mikael? If not, guess we have another Carol O'Connell/Mallory fan there!

Yes it´s me. Don´t know why it says anonymous...I´m not ashamed of my madness at all. ^^ Of course I´ve been watching too many HK movies. Beyond salvation I´m afraid..;-)

"Of course I´ve been watching too many HK movies. Beyond salvation I´m afraid..;-)"

Hope you will enjoy reading those two Linda Fairstein books and more! :)

Enid Blyton? I've never heard of her. I asked my mother and she'd never heard of her either. And we had all sorts of children's books, from all different eras, in our house. What a gap in our knowledge. Maybe her books just never got translated into American? ;)

I think the probability is very high that none of the works of the world's 5th most translated author have been translated into American! And I'd be willing to bet that neither have Elinor M. Brent Dyer's!!

More than incidentally, it was thanks in large part to Enid Blyton and Elinor M. Brent Dyer, I had a childhood which was filled with books that either had an all female or female-dominated cast of characters and/or were written by women. I may be wrong but I do get the feeling that this was not the case for many Americans, female as well as male.

I enjoyed reading about your childhood favorites. How old were you when you read Blyton, and entered bookwormery, would you say? I'm very curious about her. I'm one of those Americans who has been deprived.

I started reading Enid Blyton's books at the age of 5 years. Also, after all these years, I still remember that the very first Enid Blyton book which I read was "Naughty Amelia Jane" (which centered on the exploits of a naughty doll and the rest of the toys in a child's nursery)! :)

Should you ever wish to try to check out some of her books though, here's recommending the following:-
- The Magic Faraway Tree series (which features an enchanted wood with a tree which transports people (and elves, etc.) to all sorts of fantastical lands)
- The Malory Towers series (a girl's boarding school series)
- "The Children of Cherry Tree Farm" (a book which gives out lots of nature and agricultural information in a fun way!)

OK, I've ordered 3 of the Enid Blyton Tree series from Amazon. They are recently back in print in the US, apparently with some changes to character names and such. Hopefully I'll find time to read them soon!