A place I love 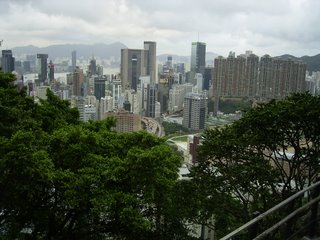 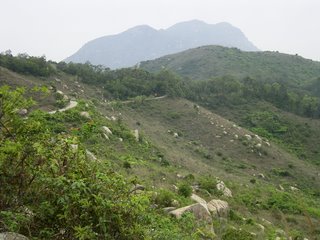 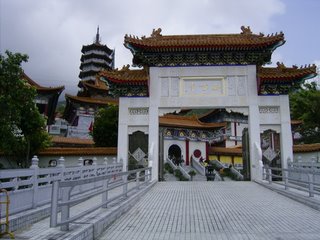 The Yuen Yuen Institute and Western Monastery,
Tsuen Wan, the New Territories
Two weeks ago, I was all excited about my (then) impending trip to Hong Kong. Today, I realize with some modicum of sadness that it's close to a week now since I bade "au revoir" once again to that which I used to think of as Movie Mecca but have grown to love for more than just its film associations and connections.

I first visited Hong Kong in December 1978. In the company of my parents and family friends, I did such standard tourist thangs as venture across Victoria Harbour on the Star Ferry, spend a day at Ocean Park and go up to Victoria Peak on its tram with the famously steep incline as well as partake of such culinary exotica as snake soup and "drunken" -- and still very much alive when they get inserted into one's mouth -- prawns. Years later, when I was at college in the U.S.A., I also would sometimes overnight in Hong Kong at my parents' friends' home in Kadoorie Avenue on my way to or back from Penang. (It was only after his untimely death that I was to learn that Leslie Cheung had been one of Kadoorie Avenue's more famous residents.)

However, my love affair with "the Fragrant Harbour" only really began after I latterly became a "born again" Hong Kong movie fan. By way of the views of it that could be glimpsed in many of its movies, the city of glass buildings, shops, shops and more shops, not so fragrant smells and weird food opened itself up to me and revealed itself to be much more than I had previously thought it was.

For example, and strange as it may seem now, I hadn't realized prior to viewing such as Patrick Tam's fatalistic My Heart is an Eternal Rose that Hong Kong has beaches! (But, as I've since discovered, Hong Kong actually boasts over 40 beaches within its borders.) Similarly, it was only through viewing such as Lawrence Ah Mon's Three Summers, an interesting coming-of-age drama whose main character -- and actress who played her -- is a Tai O villager, that it became clear that Hong Kong comprises far more than than just the ultra-high-density areas of Central, the Mid-Levels and Wan Chai on Hong Kong Island and Tsim Sha Tsui, Yau Ma Tei and Mongkok on the Kowloon Peninsula which many visitors never ever venture beyond.

At the same time, my Hong Kong movie viewing caused many parts of Central, the Mid-Levels, Wan Chai, Tsim Sha Tsui, Yau Ma Tei and Mongkok to feel oh so familiar precisely because even if I hadn't visited them before in reality, it turns out that I had seen them in many of my favorite movies. Consequently, it's well nigh impossible for me to do such as walk around the Mid-Levels without thinking of Chungking Express -- this particularly so re the sections of it around the Travelator -- or Herbal Tea -- this not least since the herbal tea shop which prominently featured in that Herman Yau movie is so easy to spot while walking along that area's Hollywood Road.

Similarly, being on Yau Ma Tei's Temple Street gets me mentally calling up images and scenes from prostitute dramas like Queen of Temple Street as well as the tearjerker par excellence that is C'est la Vie, Mon Cherie; Wan Chai now is Crazy 'N The City territory to me; One Nite in Mongkok conjures up images of Mongkok; while the very name "Tsim Sha Tsui" brings to mind To Live and Die in Tsim Sha Tsui. And so on and so on and so on. :)

All this is not to say though that I feel like I know all of Hong Kong now by any means. Which, more than incidentally, is one other reason why it continues to be fun to visit the place again and again, and to explore plus check out more and more of it.

As it so happens, latterly, I've been making twice-yearly visits to Hong Kong. On my most recent trip, I didn't take many pictures because -- sad to say -- it rained and/or was noticeably polluted for much of my visit! However, I did take some photographs on my earlier visit this year and the three which I have included in this blog entry should give you a hopefully nice idea of "my" Hong Kong as well as my photography.
Posted by YTSL at 5:08 PM