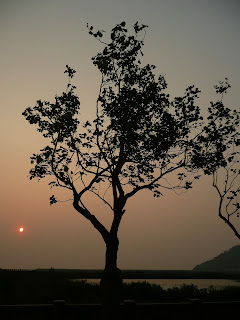 Yesterday, a copy of the latest issue of the Beloit College Magazine arrived at my abode. On its cover was a beautiful view of a particularly green part of the College's campus. And within it was a rather lengthy feature article on Our Campus Trees which was subtitled "With hearts and minds: How we love the Beloit College trees."

Though I hadn't really thought about it until I saw that line, it's true enough that I, too, love(d) the Beloit College trees. And consider them to have played their part in my Beloit College experience. In addition, I can actually testify that at least one of them played a part in making me warm to the college when I visited it as a prospective student -- for the very first Beloit College student I ever saw was someone who was sitting under a tree studying; and, as it so happens, that image absolutely fitted into my idea(l) of how and what college life was supposed to look and be like!

As it turns out though, I spent more time walking past trees then sitting under them while at Beloit. This probably had something to do with Beloit being in Wisconsin, a state in the U.S.A. where -- it is said without too much exaggeration -- winter comes with the Halloween ghost and only leaves with the Easter Bunny. (Also, for the record, the coldest it ever got during my four years at Beloit was -90 degrees Fahrenheit; a temperature so cold that I have to spell it out as "minus nine zero Fahrenheit" when I tell this to people, otherwise, they'll think I said -19!)

And in truth, most anywhere in the world that I've been, I've tended to appreciate trees as nice but nevertheless mere background features all the same rather than anything else. However, Zanzibar, Tanzania, proved to be the exception. This is because many -- if not most -- of the roads in Zanzibar, including Zanzibar Stone Town, where I worked and lived for the better part of 1995, don't have names. So the way to give directions to people is by way of citing local landmarks such as prominent establishments, buildings...and trees. (As in -- this for a place I stayed in for a time there -- "Do you know where the Kiswahili Institute is? Well, I live behind it, in the house that you have to walk through a graveyard to get to...!")

Still, I never ever could claim to be an expert at identifying different kinds of trees -- that is, beyond the obvious standout ones like coconut trees, banana trees, papaya trees and baobab trees -- though. So, one day, when I was due to meet a couple of Zanzibari colleagues who decided that I should go out into the countryside for a day with them, I reacted with some consternation when they suggested that we should meet "at the mango tree near the market" before going off to catch our bus.

At first, I tried to hide my ignorance from them. So I decided to ask whether mangoes were in season. "No, of course not!" they replied. One of them then quite logically enquired why I asked this. "Well," I had to admit to them, "because if mangoes aren't growing on the tree, I won't know how to spot a mango tree!"

Suffice to say that the pair of them just about nearly keeled over with shock at discovering this fact, then nearly keeled over again -- this time because I got them laughing so hard and hysterically that they became close to breathless. "But how is this possible?" one of them enquired after he finally got back enough breath to speak.

Of course, what made things more unbelievable for them was that -- as I had previously shown them over the course of my work -- I knew how to do such things as tell the difference between different kinds of beds (e.g., four poster, king size, queen size, single, etc.). (A "skill" that's quite useful, more than by the way, when you're doing collections inventory at a former sultan's palace.) And -- this, thanks to the archaeological portion of my anthropological training -- discern, from looking at ground topography and related evidence, where there had previously been buildings; particularly, their walls.

Yet I did not know how to spot a mango tree. Or, for that matter, most other kind of trees which what seemed like just about every single Zanzibari knew, from childhood, how to identify.

About the most reasonable explanation I could come up with in answer to my Zanzibari colleague's question was that: Well, I've been an urbanite for pretty much all of my life. And this is not something that has changed in the eleven years that have passed since that conversation between us.

On the other hand, I definitely know how to spot a mango tree -- even one that doesn't have mangoes hanging from it -- now. You can be sure that those two Zanzibari colleagues -- and also friends, who I continue to remember very fondly -- made sure of that during our subsequent visit to the countryside, and many other times besides! ;)
Posted by YTSL at 9:33 PM