In praise of Tsai Chin 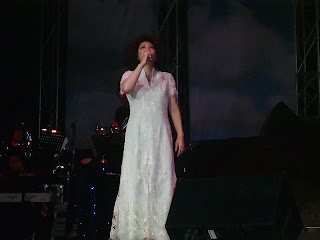 Tsai Chin in concert at Genting Highlands' The Arena of Stars


In an earlier entry on this blog, I had confessed that my music tastes aren't particularly exciting. In point of fact, much of what I like tends to veer towards the "easy listening" range which has been characterized rather unkindly as that which housewives listen to when ironing! Furthermore, my fuddy-duddy "culture vulture" tendencies have ensured that I've attended more concerts featuring the London Symphony Orchestra and Philadelphia Philharmonic Orchestra than pop musicians.

As it so happens though, since becoming a "born again" Hong Kong cinema fan, I've not only come to view Hong Kong and Hong Kong movies with new, appreciative eyes but also become more open to trying out and enjoying various strains of Cantopop and Mandopop (i.e., Cantonese and Mandarin popular music). And so much so that, at last count, I now have more Cantopop and Mandopop albums than Western pop and classic music CDs!

Additionally, starting with a Leslie Cheung "Passion Tour" concert in Atlantic City, New Jersey, back in November 2001, I've since gone and attended a grand total of seven concerts featuring some of my favorite Cantopop and Mandopop singers (along with a stage musical, Forever Teresa Teng, in Hong Kong which starred Cass Phang as the mature Teresa Teng and Angelica Lee as the Taiwanese singing legend as a young adult).

Two Saturdays ago, I went with a couple of friends to see and hear another Taiwanese singing legend, this one named Tsai Chin (like the actress who's appeared in such as The Joy Luck Club -- though they're not related), in concert at Genting Highlands' The Arena of Stars. Afterwards, as my two friends and I agreed, the 49-year-old whose voice I first heard when checking out Infernal Affairs, Hong Kong's number one film of 2002, may not be the most attractive singer to look at (to name but one, Sally Yeh, whose Genting Highlands concert we also had attended, is quite a bit more beautiful and radiant looking) but boy oh boy, does Tsai Chin have the infinitely better plus powerful voice!

"How good and powerful?" I hear those of you who've never heard Tsai Chin live in concert ask. I truly wish you could find this out for yourselves since mere words really can't do her justice.

In lieu of this happening though, let me just say that Tsai Chin's singing actually managed to move my two music-loving friends to tears and that her rendition of one song in particular managed to literally send shivers down my spine not once but six times! Also, that she did complete justice to the songs -- and memories -- of Shanghainese legends like Zhou Xuan, Hong Kong divas like Grace Chang (A.K.A. Ge Lan) and her Taiwanese compatriot, Teresa Teng, which she chose to sing that evening as her way of paying tribute to those evergreen stars of Chinese popular music.

Something else that I will maintain is that, as with Faye Wong, it's actually a disservice to Tsai Chin for her to be performing at a venue like The Arena of Stars. No offence meant to that concert venue and facility but, well, it's not a place like Carnegie Hall and, in all seriousness, the voice of Tsai Chin ranks up there as or with a top quality classical musical instrument to me. Which brings me to answering another couple of questions I can imagine is on the tip of people's tongues: namely, "Do you understand Mandarin? And if you don't, how can you appreciate the music of Tsai Chin?"

Here's the thing: I.e., years ago, the man I consider to be my Hong Kong cinema sifu sent me a few Cantopop and Mandopop tapes to listen to. After I e-mailed him to say thanks but I couldn't understand either Cantopop and Mandarin, he wrote back and pointed out that "You don't need to understand Italian or German to appreciate Western opera..." And so I have found with Cantopop and Mandopop: i.e., that I don't need to understand the languages the songs are sung in; and this especially when listening to the melodious music of Leslie Cheung, Anita Mui, Teresa Teng -- all of them sadly deceased -- and -- I'm so glad that they're still living! -- Jacky Cheung, Sylvia Chang, Faye Wong, and Tsai Chin.
Posted by YTSL at 4:26 PM

how do you become a born again hong kong cinema fan ?

Firstly, thanks for posting a comment on my blog!

Moving on and answering your question: I was raised a Hong Kong cinema fan by my parents but I lapsed in my fandom for some years before rediscovering my passion for Hong Kong movies -- with a real vengeance -- about eight years ago now. ;)

Rather nice site you've got here. Thanx for it. I like such themes and everything connected to them. BTW, try to add some pics :).

Thanks for the comments... but you're kidding re the one about pictures, right? This since, especially in recent years, I'd think I have quite a few pics in my blog posts! :b

where did you find out about her concert?? (and where can I find it again?...)

It didn't even occur to me that she is still performing. I'd love to go to one of her concerts.

I live in Vancouver, Canada for what its worth.

If memory serves me right, I found out about Tsai Chin's Genting Highlands concert through an ad in a Malaysian newspaper.

But for places in North America, the internet should have places like this one (advertising a concert in Niagara Falls just a few weeks ago):-
http://aznconcerts.blogspot.com/2010/03/tsai-chin-2010-endless-love-concert.html