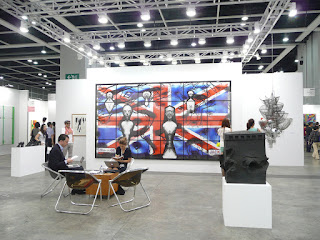 A distinctively British work as well as one by
Gilbert and George in the frame? ;b

A clarification before anything else: No, this entry is not about anything supernatural. Rather, what I mean by spiritual homes are the kind of places which a friend calls "heart places": that is, those parts of the world where one -- inexplicably or otherwise -- feels drawn to or, even, that one belongs.

As many of you who know me know full well, these days, my number one spiritual home is Hong Kong -- the place where many of my favorite movies are made plus are set as well as the land of many culinary delights, great public transportation and the convenient "smart card" par excellence that is the Octopus Card, wonderful hiking trails and paved country walks, atmospheric outdoor street markets, mega shopping malls, and -- yes, really! -- living cultural heritage that manifests itself in such varied forms as street performances of Cantonese opera and reconstructions of Tang Dynasty buildings.

However, it was not always thus. Instead, for a good many years, the territory which I looked upon and to as my actual second home as well as primary spiritual home was that which is known to its denizens as the United Kingdom (and Britain to many of the rest of us).

Something which most of you probably are unaware of is that for a good part of my childhood, I used to regularly spend part of each year in England. My father had business that took him to "the land of the Angles" annually and, early on, it was decided that my mother and I would go with him whenever he travelled there.

The first time I set foot in England, I was so young that I naively believed that I would be guaranteed of seeing snow there even though our visit didn't coincide with the onset of winter! And, indeed, I wasn't to catch my first sight of snow until my thirteenth year. (At which point I had seen quite a bit of what England -- particularly, northern Kent, where we lived, and London -- had to offer, and come to love a lot of it.) But yes, when this event finally occured, it did take place in England -- London, to be precise!

Other personal events of note which took place in England were my tenth and eighteenth birthdays; the former of which I remember vividly for, among other things, being taken to Silverstone to watch a Formula One Grand Prix race by a family friend and my birthday cake having strawberries and bananas in it as a result of my having told friends that those were my favorite fruits!

And England it was where I also did such as: spend two years at boarding school; go watch Arsenal play at their Highbury home (before and after it became an all-seater stadium); view my first ever Japanese film (and what a film it was too in the form of Akira Kurosawa's Ran!); plus cultivate passions for museums, 19th century British (and Anglophile) paintings and Egyptian antiquities.

Looking back, Britain additionally is where I developed my love for independent travel. And I consciously write "Britain" here -- rather than England -- because places which I've been to, and where I found much of interest plus to fondly remember, in that part of the world include ones in Wales, Scotland and the Channel Islands as well as England.

Thanks in no small part to the availability of economical BritRail passes and the Tourist Information Centres in Britain offering a very helpful "Book-a-Bed-Ahead" service (which gives you advance assurance of a place to stay in the next town that you visit), I felt able plus confident enough to self-organise as well as embark on tours and visits to a wide range of places and areas in Britain.

For example, one summer, I "did" a tour of Northern Wales which was mainly geared at visiting castles like those at Caernafon, Conwy and Harlech but also took in a ride on the narrow-gauge Blaenau Ffestiniog steam train along with stops in scenic parts with evocative names like "the Vale of Flowers" or utterly Welsh ones like Llanwrst, Llandudno and -- yes, it's the longest place name in all of Wales! -- Llanfairpwllgwyngyllgogerychwyrndrobwll-llantysiliogogogoch. (Also, should anyone wonder, the Welsh "ll" is pronounced like a "kleh"...and yes, I learnt this from Welsh informants! ;b)

At the same time though, I would be remiss if I didn't also point out that there are many places in Britain which I visited while in the company of friends. And, more often than not, stayed at friends' (or their relatives') homes while there.

Consequently, this entry which is effectively an ode to Britain seems as good a place as any to dispell the apparently widely-held notion that "the British don't like foreigners" by pointing out, as some others have done before me, that the thing is, somehow, "it actually doesn't take much to get British people thinking that you're not much like/of a foreigner!" (and therefore welcome you into their homes as well as in their native land). ;)
Posted by YTSL at 1:53 PM

I enjoy reading your blog. It actually delivers some meaningful content.

Thank you for the compliment. And I hope that I'll keep on being able to deliver meaningful content for some time to come. :)

Your inticing descritption of the British isles makes me want to visit. I've never been on that side of the pond before, tho' many of my friends and relatives have been many times.

Your descriptions of boarding school remind me of Hogwarts. Sorry , that's the only point of reference I have. Since I attended a local public school in the rural Midwest you could compare it to Ralphie's school in the movie "A Christmas Story".

Another friend of mine recently e-mailed me what I consider to be a huge compliment: i.e., she wrote that my writings nudge people into finding out more on the subjects which I've written about.

In any event, if my ode to Britain causes you to take some steps towards finally visiting it, then I really hope that you won't be disappointed by what you find there. :)

As for the English boarding school I went to: Alas, it's much less grand plus set in far less spectacular surroundings than Hogwarts (which, BTW, looks to be set in the Scottish Highlands)! However, old it most certainly was too... (Maybe I'll pen an entry on it at some point in the future.) ;)