The food capital of Malaysia 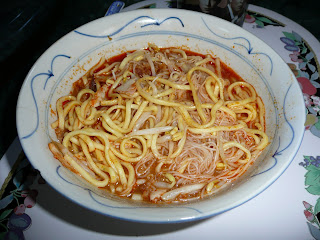 It may not look like much but a bowl of Hokkien mee
may well be my favorite breakfast dish in the whole world!
Yet another weekend has arrived. And what does the weekend mean to me? During the English Premier League season (which generally runs from August to May annually), the Gooner part of me tends to look upon it as a couple of days during which there's football, particularly Arsenal, matches to follow and watch "live" late at night via satellite TV.

However throughout the year over here in , the weekend also is when I can go avail myself of the absolutely divine laksa from my favorite Malay laksa stall up in Tanjung Bungah that's operated by a grandmother and her granddaughters from to

Earlier today, I went over to Tanjung Bungah to buy six packets of this particular laks dish; four to distribute to others and one each to have for my lunch and dinner. The total damage to my wallet? A bargain RM10.20 (i.e., US$2.87)!

(It's not for nothing that a jokey story about Singaporeans -- who tend to have both higher costs as well as standards of living than their northern neighbors -- visiting Malaysia goes as follows: Question: Why do Singaporeans sound like birds when they are in Malaysia? Answer: Because they go around saying "cheap, cheap, cheap" when they're here!

For those who haven't yet been let into the secret -- and to quote a travel writer sent over to these shores by Britain's The Guardian newspaper, "Eating "C'n'G" (cheap and good) is a national pastime in Malaysia." And , whose residents have a national reputation for being misers supreme (kind of like the Scots vis a vis the rest of ), is the place to eat good as well as cheap local food.

Alternatively put: Yes, Sarah (as opposed to Virginia! ;) ), Penang really is widely considered -- including by New York Times and The Hindu Business Line writers as well as Penangites and other Malaysians -- to be the food capital of Malaysia! :b

Should anyone require further proof of this: Note that all over the world (including in American cities like New York, , and ), there are Malaysian restaurants named . And this even when -- as with the "Penang" chain of restaurants found on the Eastern Seaboard of the U.S.A. -- the founder and owner actually hails from elsewhere in Malaysia. (In this particular case: !)

In any event, should you ever happen to find yourself in "The Island of the Betelnut" (which is what Pulau Pinang, the Malay name for my home state, translates into), you -- who, with apologies to those who are Muslim, Hindu, Jaian, etc., I am assuming are a complete omnivore, unrestricted by any kind of food taboos -- would do well to make use of the following itinerary that should open you up to one full day of feasting:-

Breakfast: Spicy and tasty hokkien mee (AKA prawn noodle soup) from the stall inside a kopi tiam (AKA kopitiam) (i.e., Malaysian-style coffee shop) over in Moulmein Lane, near the Pulau Tikus market, to kick start your day. (But make sure you get there by 9 a.m., otherwise you'll risk all of the hokkien mee being sold out before you arrive!)

Weekend lunch: The sublime as well as extremely aromatic Malay assam laksa by Shamrock Beach in Tanjung Bungah. (But of course!!!)

Dessert/afternoon tea: Refreshingly cold, rose-syrup overlaid ais kacang (trans., "ice beans" but that's not even the half of it and believe you me when I say that it's one of those dishes that tastes a whole lot better than it sounds!) from the famous stall at Swatow Lane. (N.B. This family favorite is one which my mother started patronising when she was a schoolgirl! Now run by the middle-aged grandchildren of the original operators, this modest-looking hawker stall has been sent as far as Adelaide to represent Penang at food fairs and the like!)

Dinner: Gourmet's -- and gourmand's -- delight beehoon soup or moi (rice porridge) at the stall which headlines food options at the Sin Seng Kopitiam in Perak Lane. The hoo tau (fish head) beehoon soup is the most famed of its range of offerings and there also are those who go there expressly for the frog -- no, I am not kidding! -- moi or crab beehoon soup. However, my vote goes everytime to the indescribably superb pork beehoon soup, whose ingredients include finely-cut and incredibly delicious tasting slices of...pig kidneys.

(And with that last confession, I fear that I've thrown away all the credibility I ever had as a food guide...!) :b