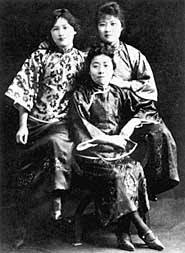 There's significance in one woman having a white flower in her hair
(or not, as the case may be)
Being the fan of Hong Kong movies (and more) that I am, I have to admit to spending my fair share of time not only inside a cinema but also in front of what has been disparagingly referred to as "the idiot box". Admittedly, I can bear witness to many people having a tendency to slump in front of their television and indulge in what could safely be characterised as passive, consumeristic viewing. However, I'd like to pride myself on making sure that my brain -- and, my heart too, more often than not as well -- is as engaged as my eyes and ears when checking out many a movie video or even television programme.

As proof, I will cite its being so that, as mentioned in an earlier blog entry (i.e., the one about Hong Kong entitled "A place I love"), Hong Kong movies taught me more about Hong Kong than I had known from a few prior visits there. And in teaching me to better know and appreciate the "Fragrant Harbour", it got me doing such as visiting plus more actively going out and about Hong Kong, including the less populated islands like car-less Cheung Chau and still greener Lamma (the home island of a certain Chow Yun-Fat, BTW!), as well as in search of heritage attractions up in the New Territories like the Ching Dynasty-era Mandarin's house that is Tai Fu Tai and the Kowloon Walled City Park which now stands where the notoriously lawless Kowloon Walled City used to.

As further proof, here are four more things -- in no particular order plus, hopefully, illustrating the variety of it all! -- that Hong Kong movies have taught me:-

1) Mainland China, Hong Kong and Taiwan are often collectively referred to by Chinese people as "The Three Chinas" and have particular characteristics attributed to them.

At the same time, "The Three Chinas" also appear in human -- and usually female -- form in other Hong Kong movies; with my favorite of these being Tsui Hark's Peking Opera Blues. And lest it not be clear, in that cinematic gem: Hong Konger Cherie Chung's independent, money-grubbing character, Sheung Hung, represents Hong Kong; Sally Yeh's family-oriented, apt to stay-at-home character, Pat Neil, represents Mainland China (even though the actress playing her is, ironically enough, a Canadian-Chinese); while Brigitte Lin Ching-Hsia's flawed even while idealistic character, Tsao Wan, represents the actress' home territory of Taiwan.

All of these literary works have served as the inspiration, if not basis, for many Hong Kong and other Chinese movies. For example, the Hong Kong Movie Database lists not one but four Hong Kong film versions of Dream of the Red Chamber alone, two of which -- the 1962 version starring Betty Loh Ti, and the 1977 version starring Brigitte Lin and Sylvia Chang -- were produced by the venerable Shaw Brothers' film production company.

As for Journey to the West: Who can forget the ingenious adaptations of these tales -- in the form of A Chinese Odyssey Part One: Pandora's Box and A Chinese Odyssey Part Two: Cinderella -- that star Stephen Chow as well as not gasp, albeit more in shock than actual amazement, over Jeff Lau's later A Chinese Tall Story, never mind the Shaw Brothers adaptations of this thoroughly imaginative piece of literature?

3) Women wear white flowers in their hair as a sign of mourning in Hong Kong.

Early on in my "born again" Hong Kong movie fan phase, I noticed that in one emotion-charged scene in the very intense revenge drama that is The Lady in Black, Brigitte Lin put a white flower into her hair before setting off on her mission. In doing so, she was signalling something to local Hong Kong movie audiences but since I lacked the necessary cultural information at that point in time, I was in the dark as to what this all meant and, also, what was going to ensue soon afterwards in the film.

Feeling frustrated by this state of affairs, I resolved to learn more about Hong Kong culture and traditions so that I could be more attuned to all manner of goings on that took place in Hong Kong movies. Sometimes, as I am suggesting, this education can come from viewing the movies themselves.

In this particular case, the meaning of the white flower in a woman's hair became clear after I viewed another intense movie with a revenge theme in Widow Warriors. And should anyone wonder, other films in which I've since witnessed this practice include the star-studded The Fourteen Amazons!

4) Cantonese is a tonal language and, as such, this makes for the possibility of much word play.

Similarly, as I was delighted to be able to note during a viewing of Mr. Vampire III, all it takes is a few tonal shifts to turn "yau cha kwai" from being "fried dough stick" into meaning "there's a fried ghost"! :DDD

Now if only I can decipher and 'get' even one tenth of the puns and other localised jokes that Sing Jai makes in his movies... ;S

"The Three Chinas" appears in human in Hong Kong movies - what comes to my mind is "The Heroic Trio" with Michelle Yeoh, Anita Mui, and Maggie Cheung.

Yeah, "The Heroic Trio" most certainly works too. Correct me if I'm wrong but: Michelle Yeoh/Invisible Girl = Taiwan (who temporarily separated from the other two but eventually reunites with them); Anita Mui/Wonder Woman = Mainland China (homely and motherly but heroic, when need be, just the same); and Maggie Cheung/Thief Catcher = Hong Kong (money-minded -- once again! -- but also feisty, courageous and, ultimately, willing to help her compatriots)? :b

Actually, as far as I know, the explanation is different (sorry I can't find the original source of this at the moment). I remember reading that Maggie Cheung/Thief Catcher represents money minded Hong Kong, yes. But it is Anita Mui's Wonder Woman who represents Taiwan, as a symbol of justice, and Michelle Yeoh/Invisible Girl represents mainland China - who is struggling under the mind-controlling evil empire.

It's not surprising, considering the 1993 film was made not long after the Taianmen Massacre. We know that the dark sequel of the "Trio", which was filmed back to back with the original, was largely inspired by the event. A few years after, in 1997, the CCP (Chinese communist party) took over Hong Kong. Unfortunately we can already see the mind-controlling effect happening in Hong Kong, especially in their media - a lot of (maybe most of) the newspapers have already been bought by the CCP, openly or secretly.

Firstly, thanks for the correction and additional information with regards to who represents which of "The Three Chinas" in "The Heroic Trio".

As for your discussion of "mind controlling" happening in Hong Kong, I know what you mean but still would like to add a couple of comments:-

a) Amidst all the "(Mainland) China-ization" in Hong Kong, there remain people like Johnnie To (who espouses a distinctly Hong Kong view/identity vis a vis a Mainland/Greater Chinese one -- and not incidentally, this is the same Johnnie To who's the director of "The Heroic Trio").

b) It's all relative with regards to "mind-controlling", especially vis a vis the media. E.g., from what I understand, Hong Kong's the "South China Morning Post" remains primarily owned by a Malaysian Chinese (Robert Kwok) rather than the CCP. OTOH, over here in Malaysia, the dominant English newspapers, i.e., the "Star" and "New Straits Times" are both in fact owned by political parties -- in the case of the former, the Malaysian Chinese Association (MCA); in the case of the latter, the United Malays National Organisation (UMNO).

Something else to bear in mind is that in many countries, the media doesn't necessarily claim to be "objective" in their news reportage, etc. E.g., in Britain, it's not for nothing that the "Daily Telegraph" is nicknamed the Torygraph (Tory = Conservative Party member) and that it's said that people know what political affliation/views -- and your social class -- based on what's your newspaper of choice.

When I say a media is "bought by the CCP", I didn't really mean the official ownership. I mean they agree to follow certain guidelines from the CCP in exchange with cash or other benefits . BTW, I think it was in last year, Hong Kong's "Apple Daily" was rejected by the Chinese government to cover some important events in mainland China, because the newspaper did not follow CCP's order.