More than one friend and visitor to this blog has asked me: how many photos do you take on a single hike? In the case of the one I went on that took me along most of Section 3 of the Wilson Trail (i.e., my regular hiking companion and I elected to start our hike from Yau Tong rather than Lam Tin MTR station and thus shaved off a kilometer or so from the beginning), the answer is close to 80 snapshots!

In my "defence", I'll point out that we did go on a detour to the top of Devil's Peak to check out the redoubt there. But both by way of my previous photo-essay and now also this one, I trust that I'll be able to show that there's really quite a few interesting sights as well as scenic views to be had when going along this section of one of Hong Kong's four official "long trails"... :b 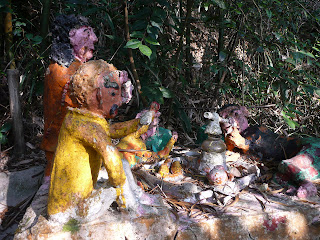 Some two thirds into the trail, it's not the views that
grabs one's attention but, instead, a shrine containing
a whole series of curious sculptures made by
a local man by the name of Lee Chun Bor 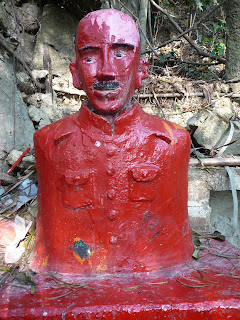 Is this sculpture supposed to be
of a super red Sun Yat Sen? 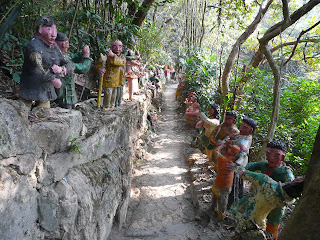 Yes, Mr Lee really did put up a whole lot
of interesting sculptures in the area! 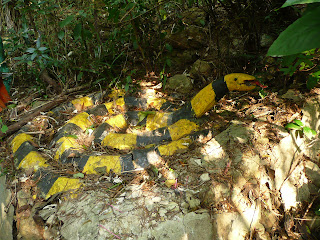 Although most of his sculptures are of humans, he also
has some animal subjects -- including this large snake! 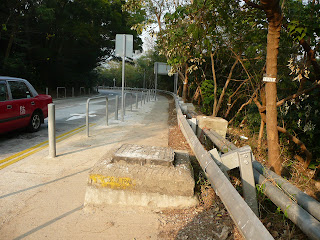 One of the more surreal trails I've hiked in Hong Kong
also required to cross more than one fairly major road
and be extra eagle eyed in order to spot its signs... 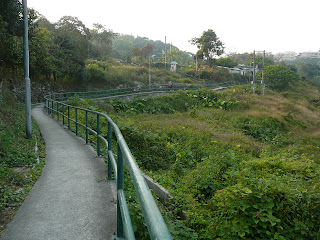 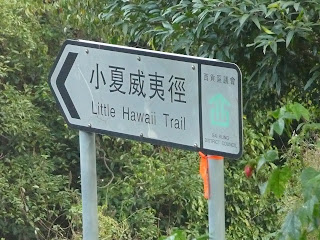 Sign pointing to a little bit of Hawaii in Hong Kong?! 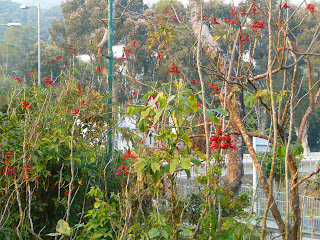 Some color courtesy of a grove of ivory coral trees
located very close to the end -- finally! ;b --
of the 9.3 kilometer long trail :)

Love the sculptures! I would take this hike just to see them.

Maybe when you next visit Hong Kong... ;b

I'd like more information myself about the Little Hawaii Trail over on Kowloonside. Tried Googling but didn't come up with much! ;(