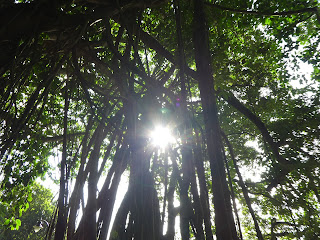 The sun seems to be shining especially strongly these days... 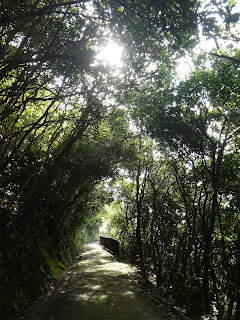 On a hot day, shade is really welcome 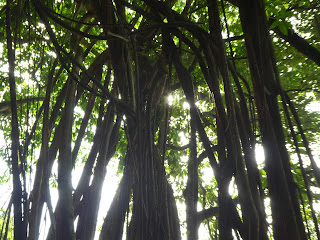 And yes, it's scary to think how much Hong Kong --
and the world in general -- would be with less greenery... :S
In many parts of the world (including territories as far apart as Canada, Algeria and Japan), heat records are being broken this July.  And although it hasn't been as horribly hot this month in Hong Kong as it was this past May, I've still had the air-con on most nights this July rather than be able to rely on the fan and breezes blowing through my open windows like I would prefer to.
Another measure of how baking hot -- and humid -- it's been is that today, I felt a need to take not just one or even two but three showers to cool down and wash away the copious amount of sweat that I've been shedding for much of the day!  In addition, on a hike earlier this week, I was somewhat shocked to find that the temperature up on The Peak -- where I like to go to get some respite from the heat -- was not that much cooler than the parts of Hong Kong Island that were far closer to sea level.
As a consequence, even though visibility was high and the the skies were beautifully blue that day, I found myself enjoying being in the shadier sections of the hike -- where my views of the surrounding scenery were partly or even largely obscured by vegetation -- more so than those parts where I had clear views of the panoramic vistas that unfolded before and below me but were exposed to bright and frankly pretty intense sunlight!
Perhaps because it was a hotter day than many people liked, I encountered way fewer folks on the trail -- that took me from Victoria Gap down to the University of Hong Kong's Main Campus via the western edges of High West and Lung Fu Shan -- than is normal even for a weekday afternoon.  In particular, the section of the Hong Kong Trail leading from the Peak Circuit over to the pocket park below High West was particularly quiet that day.  Indeed, I'd go so far as to say that it was eerily empty of humans to the point that I could easily imagine myself to be much further away from civilization than actually was the case! ;b
Posted by YTSL at 11:59 PM

Love the way sun light glows though the trees.
Coffee is on

I'm glad to know at least one person appreciates that too! :)