A scenic urban walk on a late spring day 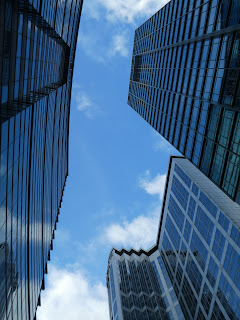 I found myself looking up a lot early on in today's walk :) 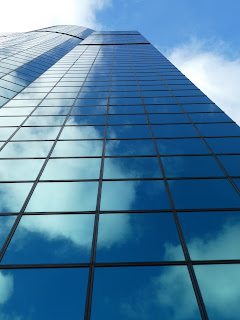 One reason for this: the reflections on the glass surfaces
of a number of the high rise buildings I passed along the way! 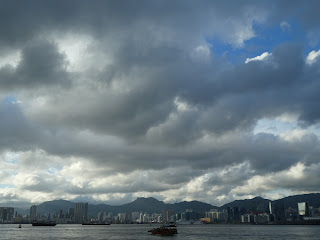 Later on in the walk, it was the clouds
that particularly caught my eye ;b
Today was one of those days where the blue skies and high visibility Hong Kong enjoyed made it so that I was loathe to not spend some time outdoors but, at the same time, didn't feel like a strenous hike on account of the temperatures and humidity levels being among the highest we've had in quite a while.  So rather than head out to one of Hong Kong's 24 country parks or 11 designated special areas, I went on a long urban walk that took me past six MTR stations instead!
As is to be expected of pretty much any walk in a city that has the most skyscrapers in the world, my route took me past several high-rises.  While I've generally become pretty blasé about their existence, today was one of those days where quite a few of them -- particularly those whose exteriors are almost entirely covered by reflective glass -- caught my eye on account of the images of bright blue skies and fluffy white clouds that appeared on them, and got me thinking that Hong Kong really can be so beautiful on fine weather days.

At North Point, near the government offices where Infernal Affair's rooftop scenes were shot, I got on to the popular waterfront promenade that stretches over to Shau Kei Wan, broken only over a short stretch at Sai Wan Ho, just as a large cruise ship sailed by.  Also making waves in Victoria Harbour this afternoon were a number of junk boats laden with revellers returning from a day out that I'm sure included quite a bit of boozing and feasting along with water sports!
With the water looking on the choppy side due to there being quite a strong breeze blowing, I was happy to be on land rather than on a boat this afternoon.  Walking along the harborfront, I also was privy to some really splendid views of Victoria Harbour and Kowloon (including several of its hills) that were made all the more striking on account of the sky containing many fast moving as well as voluminous clouds.
Although some of the clouds looked on the threatening side, no rain fell while I was outdoors this afternoon.  So the only reason why my clothing was on the damp side by the end of the walk was because of the perspiration I had shed along the way, and got me feeling that I had got in a healthy amount of exercise even without hiking up and down any hills this late spring day! ;b
Posted by YTSL at 11:59 PM