The Osaka Museum of History can turn a museo-phobe into a museophile! 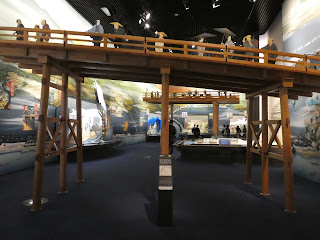 Beautiful and creative exhibits are the order of the day
at the Osaka Museum of History! 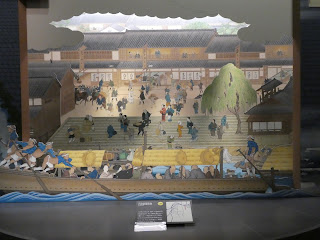 As far as I'm concerned, this history museum's exhibit designers
have created veritable works of art that are interesting to boot! 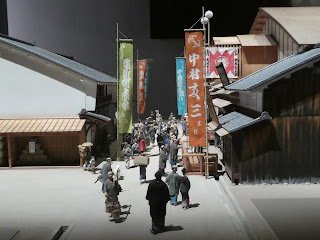 
Ever since I was a kid, I've loved visiting (good) museums.  So it's actually rather ironic that neither of my parents are keen museum goers, with my mother deciding against venturing into a museum despite just being a few meters away from its entrance on more than one occasion -- and even opting to have a nap outside of one while I spent a couple of hours checking out its exhibits!


Imagine my surprise, then, when, upon asking her to name the top five attractions we had visited on our most recent Japan trip together, she actually put two museological establishments on her list; with one of them being the Hiroshima Peace Memorial Museum (which I told her was a "must visit" when we went to the first city ever to have an atom bomb dropped onto it) and the other being the Osaka Museum of History (which, if truth be told, I only decided to go to on this visit after it rained heavily for much of the final full day of the trip)!


Housed in a modern, multi-storey building whose upper floors offer up birds'-eye views of Osaka Castle (located just across the street), the Osaka Museum of History's exhibits cover the period in Osaka's history that predates the establishment of a permanent imperial capital at Nara (710-794), when the Naniwa Palace was the residence of choice of the reigning Emperor (and before Osaka came to be known by that particular name), all the way to the 20th century.


While there are artifacts on display from those ancient as well as later times, it became apparent early on during our tour of the museum that this institution has seen fit to augment their exhibition with very detailed dioramas, colorful, large-scale reconstructions and atmospheric audio to help history come so much more alive.  As an example: a good part of "The Ancient Period Floor" of the museum is taken up by a partial reconstruction of the Daigokuden (Main Hall) of the Naniwa Palace, complete with multiple vermillion-painted pillars 70 centimeter in diameter and life-size mannequins, all of them with distinct faces and dressed in elaborate period court attire.


And on the "Modern and Contemporary Period Floor", there are reconstructions of Late Taisho and Early Show Period homes, shops (ranging from a humble grocer to a store selling fashionable clothes) and the advertisement-festooned facade of a grand kabuki theater that are really impressive in terms of their detail.  Nonetheless, it's the floor covering the Middle Ages and Early Modern Period whose exhibits I found enchanting and even downright amazing; with scale models and dioramas that I look upon as works of art in their own right but actually also communicate so much about life then in that which was dubbed "the Water City".

As if all that weren't already impressive enough, each of the museum's floors containing permanent exhibitions have audio-visual sections, many of them cleverly worked into dioramas and interactive displays.  Still, it is highly recommended that visitors rent the audio sets available near the entrance to the museum as they really do provide a lot of supplemental information that's actually really interesting and often makes one appreciate further some of the little but cool (and even humorous!) touches that the exhibit designers have added to many of their immaculately crafted displays.

All told, my mother and I ended up spending over three hours at the Osaka Museum of History.  And I can't think of a higher tribute for this commendable museological establishment than to state in no uncertain terms that both this avowed museophile and her supposedly museo-phobe mother both enjoyed our visit to it tremendously! ;b
Posted by YTSL at 11:59 PM

You're a woman after my own heart then! ;b