Nature's beauty and a pox on those who despoil it! 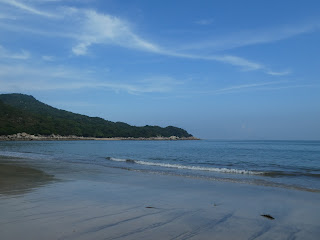 Not all Hong Kong beaches are super filthy! 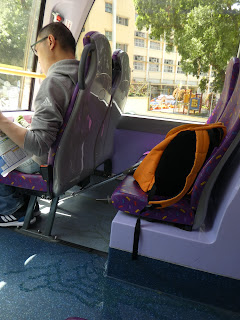 Creators of mess in public areas ought to be punished!


Early last week, I took two visitors from England on a whirlwind tour of Lantau Island that included a ride on the Ngong Ping 360 cable car and time out at the Ngong Ping plateau and in the village of Tai O.  At the last destination, I figured that the Yeung Hau Temple would make for a visual highlight -- only to find that the splendor of its surroundings on the edge of the water was somewhat negatively affected by the beach nearby having quite a bit of trash strewn about it.


Elsewhere in the village, we also came across unsightly amounts of rubbish by the banks of the waterways that course through a good part of Tai O.  And, as I documented in my post last Saturday about how doing beach clean-ups can feel like embarking on a Sisyphean task, I came across still more -- and, in fact, even worse -- garbage-strewn sights at Cheung Chau's Tung Wan Tsai (Coral Beach) over the weekend.


So I must say that I was expecting to encounter a pretty ugly scene over at Lo Kei Wan, a beach with a camp site located pretty close to Section 9 of the Lantau Trail that a friend and I hiked along yesterday; this particularly after my friend mentioned earlier on in the hike that she had read of Hong Kong's public beaches having been invaded by Mainland Chinese tourists over the weekend.  And the portends were indeed not too good as we approached that section of Lantau South Country Park, with strong smells emanating from the public toilet located there and there being campers lolling about in the area.


But while the beach at Lo Kei Wan was not quite pristine, it actually was far cleaner looking as well as uncrowded than I had expected that it would be!  Something else that I couldn't help but notice was how beautifully fine the sand on it was.  As for the views from there: my friend was moved to suggest that it compared with some over in the South Pacific!


In a perfect world, the fact that Hong Kong that has such natural beauty should inspire and move people to go out of their way to ensure that their environs be as clean as possible.  But in our far from perfect world, it seems not to be in the nature of many people to actually care about the environment and make a point to not despoil it.

Here's the thing: I know it's difficult to get people to clean up messes, even those of their own making.  But, really, is it too much to ask the powers that be to educate folks to minimize their creating the messes in the first place -- and if even that proves too much of an ask, how about the authorities having a will as well as way to hunt the litter bugs and polluters down, and penalize and punish them in a way that actually will deter them from doing so again as well as others from adding to the already too large amount of garbage in our world?!
Posted by YTSL at 10:24 PM

I grew up in an era of trash dumped along road sides (not beaches). Nothing was ever said about it and town road crews picked it up. Fast forward 25 years and my girls are in elementary school where they learn about proper trash disposal... not throwing it out the car window. This was part of their generation's education from preschool on.

Thanks for the perspective. Adding to my frustration at the current trash situation in Hong Kong is that it seems like the territory is being invaded by people who have been less educated about the environment than they should be and also that many people are un-learning past lessons -- sometimes because they look at the former group and think "if they're doing it, why can't we opt for the easy/irresponsible way too?!"