What I couldn't do this past week after having wisdom tooth surgery! 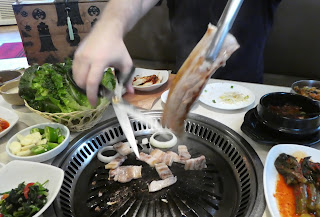 The kind of food I've been pining to eat this past week
but haven't felt able to do so... 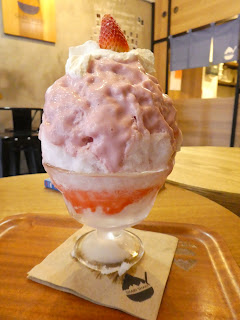 I ate this happily this past Monday though! :)
One week ago today, I had emergency wisdom tooth surgery, and only finally got the stitches put in last Friday removed this afternoon.  While the dental procedure itself took around just 30 minutes, the trauma of not being able to eat (and drink) a whole bunch of stuff lasted much longer.  Indeed, although I was told that it was okay for me to consume rice along with other soft foods after the local anaesthetic had worn off and my mouth stopped bleeding (which, by the way, took a few hours longer than the estimated one hour or so after the operation), I actually only finally felt confident enough to do so this evening (and proceeded to have an unagi don (eel rice bowl) for dinner!).
With my dentist having been fairly casual about post surgery procedures, I honestly thought that it all wouldn't be too traumatic -- or, at the very least, that the worst thing about the removal of my wisdom tooth would be the surgery itself.  So imagine my shock when I set about consuming a dish of soft-boiled eggs for dinner the first evening after my wisdom tooth surgery, only to discover that even that apparently "safe" food caused part of my mouth to sting like the blazes -- and this despite my being on painkillers along with two different types of antibiotics and "anti-swelling" medication!
Determined not to have any more unnecessary shocks, I went and searched for information online about what one can safely and comfortably eat post wisdom tooth surgery, what to generally expect in the coming days, etc.  And yes, I know that one should not and cannot believe everything one read on the internet but I have to say that I did come across my share of useful information that must have been correct since I've now been told, one week after following them, that my mouth is healing nicely (though, my dentist has belatedly informed me, full recovery will come only after two months!).
For those of you who want to be better prepared prior to going through the experience, the following are a few essential "must not dos" that I adhered to this past week: Do not eat hard -- especially crunchy but also spicy -- foods; do not eat small foods (like poppy seeds, sesame seeds or even rice) that can get in the empty tooth socket; do not brush your teeth for 24 hours (and while it's okay to generally do so afterwards, make sure to steer clear of the newly empty tooth socket); do not gargle hard or with regular mouthwash (like Listerine) for at least the first few days; and do not drink carbonated as well as alcoholic drinks.  And, actually, if you're given metronidazole as one of your antibiotics (as I was), don't drink any alcohol until at least 48 hours after you stop taking it; and if you're given tinidazole, make it so that you don't consume any alcohol until three days after you stop taking it.
Despite my fondness for a tipple (particularly sake), I've actually missed drinking alcohol far less than being able to eat hard, crunchy snacks like nuts, crisps and rice crackers, and spicy foods.  (Also, while I craved land meats the first few days, that craving actually went away over time even while the craving for crunchy snacks stayed and even increased!)  In addition, the "no carbonated drinks" rule was also difficult for me on account of my fondness for sparkling as well as still water.  So after I got my stitches out this afternoon, I decided to celebrate by eating a pack of crunchy sesame seed biscuits (cookies in American English) and a bottle of peach soda!
Something else that those who have had wisdom tooth surgery are recommended to do is to take things easy for the first day or two afterwards.  For many, going and taking part in a beach clean-up which includes a 45 minute hike to the beach and another 45 minute hike out might be considered too strenous an undertaking during this period.  But, well, I did it (and also a more demanding hike a few days later) and wasn't any worse for doing so -- for which I'm very glad!

Should anyone wonder, I was inspired to write all this by my coming across a blog post entitled Things People Never Tell You When You Go For Wisdom Teeth Extraction and finding it helpful and interesting.  For, among other things, I'm so in agreement with that blogger about people tending to focus on the wisdom tooth surgery but not what comes after (aka "the healing part") -- which, frankly, ended up being far more worry-inducing (think dry socket fears galore!) than I realized would be the case! ;S
Posted by YTSL at 10:21 PM

Yes, healing from wisdom tooth surgery was much more arduous than my dentist had implied it would be! So I do empathize with your experience. And I know someone who actually tried to return to work the afternoon after her morning surgery, only to regret it greatly!
But returning to a normal diet is such a relief, once you've healed... Here's to crunchy snacks!

I think if the dentists told us what wisdom tooth surgery and the healing process after would be like, we'd be far less likely to opt for it. I'm just thankful that I only pulled out one wisdom tooth and really feel for those who went ahead and got all four wisdom teeth pulled out in the same day!