Two Buddhist temples and a Shinto shrine in Onomichi with charm to spare! 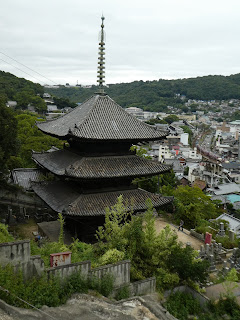 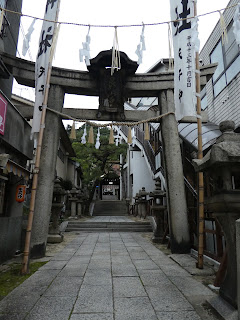 This shot of Ushitora Jinja late in the day got
a friend of mine thinking of Spirited Away ;b 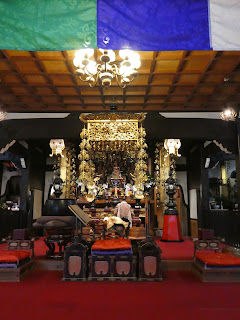 For my part, nearby Myosenji felt
even more magical to me! :)

There is an official walking route through Onomichi known as The Temple Walk that takes visitors to all 25 of the temple-filled port town's temples.  As someone who suffered from temple fatigue midway through her visit to Kyoto, I wasn't about to go along that path.  So I had only planned on visiting Onomichi's most famous temple, Senkoji.  But I ended up passing (near) by a couple of other Buddhist temples and one Shinto shrine on my way down from Mount Senkoji which looked interesting enough for me to want to spend a few minutes checking out.
First up was a three-storey wooden pagoda in the center of a graveyard which turned out to be part of Tenneji, a Buddhist temple whose main hall and compound was further downhill.  There was a deserted feeling to the place but even while there was no one I could talk to or get an information leaflet from, I discovered a helpful device in its grounds which dispensed audio information about the place in Japanese, English, Korean and Mandarin (which, more than incidentally, I'd have appreciated coming across at the more celebrated Sensoji!).
Next up was Ushitora Jinja, a Shinto shrine located close to the lower station of the Mt. Senkoji Ropeway and protected from the danger of a passenger cabin or such falling onto it by large netting having been set up over the section of its compound which were directly under the path of the ropeway!  Unlike Buddhist temples, it doesn't seem to have a closing time and its grounds seem to be one that students and workmen happily cut through on their way home or such.
All in all, I found it quite amusing that while it seemed to have an air of mystery for foreigners, this over 1,100-year-old shrine seemed like an everyday, even if favored, spot for the locals.  And it really did add to its charm for me that when I visited Ushitora Jinja, I found myself passing through a stone torii with two matrons sitting on each side of it and happily chatting (gossiping?) away!
Similarly, I loved that when I was in the grounds of nearby Myosenji, I not only spotted a beautiful striped cat but also a little hut that I can easily believe was that cat's abode.  Something that I also appreciated is that its colorful main hall was still accessible and that there was a worshipper in there so focused on doing her business that I honestly don't think she noticed or realized that, for a few moments, there was someone else in that space besides her!
In retrospect, I do regret a bit that I hadn't actually gone out of my way to check out a few more of Onomichi's temples.  Among other things, I appreciate that, in contrast to many of those at, say, Kyoto and Kamakura (even the less famous ones), none of them charged admission fees.  This not only speaks to the cheapskate part of me but, in all honesty, it also is a clear indicator that they are much less tourist attractions and more actual places of worship still; which, ironically, makes them more appealing for and to this not particularly religious traveller!
Posted by YTSL at 11:48 PM