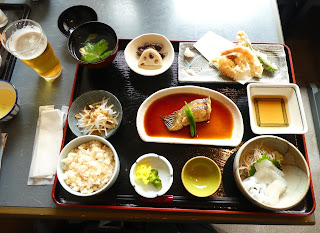 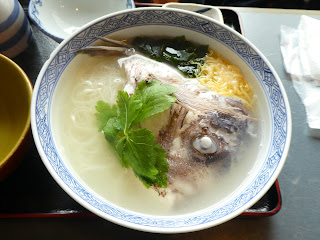 My mother opted for a bowl of noodles and fish head! 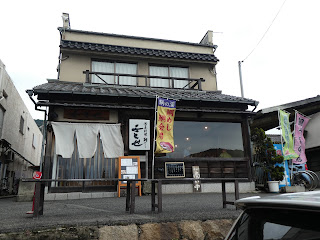 The banner at the front of the restaurant is what alerted me
to its being a tai (red sea bream) specialist :b


As I've come to learn over the course of hiking in Hong Kong, there's nothing like a walk and fresh air to get one feeling super hungry.  And even if our exploration of Tomonoura was on the leisurely side, the fact of our doing it on foot made it so that soon after getting into the quiet seaside town, my mother and I were thinking that it was time to break for lunch: at which point we got to feeling that Tomonoura may be on the overly sleepy side as there didn't seem to be (m)any restaurants in town that were open for lunch!


So it was with no small amount of relief when I caught sight of a banner with a red fish emblazoned on it signalling the existence of an eatery specializing in dishes featuring the red fish found in the waters off Tomonoura that was actually open for business.  And dishes featuring tai (red sea bream) were what my mother and I ordered at Chitose; not only because we figured that they'd be good but also because it seemed that virtually every dish on the restaurant menu figured that local fish!


Having ordered the tai (red sea bream) teishoku (set) lunch, I figured that my order's main dish would feature tai.  While that was indeed the case, tai also was a component in pretty much every other dish on my tray; be it sashimi, tempura, soup or salad!  All told, I ended up having tai six ways -- and in all honesty, they all tasted pretty terrific.


Meanwhile, my mother received a shock when her lunch order was delivered to the table.  It wasn't that the only part of the tai she had been given was the head nor even that it came complete with one bulging eye (since, strictly speaking, the dish in question contained "just" half a fish head), since she had specifically ordered a fish head and somen noodle dish.  Rather, it was that the bowl her order came in was so very large and full!

As it so happens, after dining at Chitose, we did end up spotting a few other eateries in town that were open for lunch.  Nonetheless, I'm pretty glad that we saw Chitose first and ended up eating there.  For one thing, it's not every day (or everywhere) that one comes across a tai specialist eatery.  For another, lunch there really was generously portioned, competitively priced and properly delicious! :)
Posted by YTSL at 11:34 PM

That looks like a great lunch spot for some local catch! How much for the teishoku?

I would indeed recommend Chitose as a lunch spot -- but with the caveat that you must like seafood in general and tai in particular! Re the teishoku: If memory serves me right, it cost something like 1850 Yen. Not bad at all, right? ;b

I remember paying about 700 yen just for one single simmered tai dish, at the cheapest shokudo kind of place, and at mediocre freshness at that. So 1850 yen for 6 courses is indeed a very good deal for fresh tai!

For the most part, I find food in Japan to be good value as well as delicious. The one exception on this trip was at a place in a small covered arcade off Nara's Sanjo-dori which looked nice enough but had terrible service and whose unajuu was 1000 Yen but ended up being just a small bowl of rice with two thin strips of unagi on it that weren't all that exceptional tasting. As I said to to my mother, if I had been in the US, I'd have demanded a refund! As it was, I broke with etiquette and baldly told the cashier/waiter that I just had my worst meal ever in Japan at his restaurant... :S