Oh dear re the deer on Miyajima? 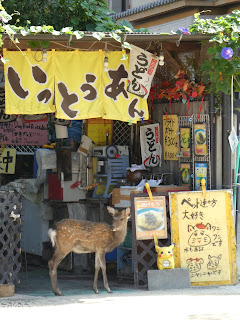 Deer (and Pikachu) outside a Miyajima souvenir shop! 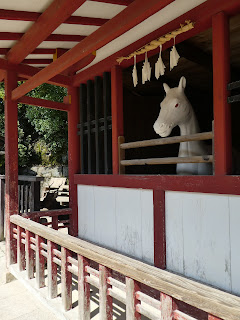 Fake horse in a stable, real deer nearby ;D 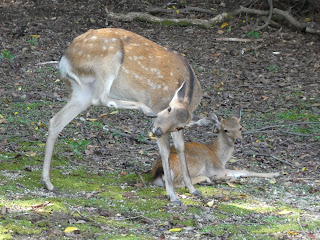 Deer and fawn in a more natural setting :)


Please do not feed, touch or get too close to the deer.  That injunction is spelled out (in English as well as Japanese) on signs posted on various parts of Miyajima and also broadcast on a loudspeaker located near the ferry pier which every visitor to the island passes through.

But while my mother and I were happy to obey that directive, quite a number of visitors were reluctant to obey it -- and that appeared to be the case too with regards to many of the representatives of the island's wild deer population which thronged the area near the island's ferry pier, the main paths from it to Itsukushima shrine and seemingly pretty much every part of Miyajima where sizable numbers of tourists were to be found!


While these wild creatures generally seemed to be mild mannered (as befits their being seen as messengers to the gods in Shinto), they can be pretty persistent in their quest for something to eat -- and also surprisingly unchoosy with regards to what they deem edible.  As an example, I saw a deer eat up a tourist map that it had found lying on the road, another chomping away at the end of a distracted tourist's woolly cardigan, a third trying to sample my mother's bowl of kakigori and a fourth actually stick its head right into the open-top bag my horrified mother was carrying to search for something edible rather than opt for more natural foods like grass, twigs and leaves to feed on!


And while we did spot a few deer while walking along the quiet nature trail that led us from the ryokan we stayed in on Miyajima to Daishoin, we saw far more of these animals in the more built-up sections of the island -- and, from their behavior, will surmize that they are very at ease in the company of humans and may even make it a point to seek them out, especially those among the species who it is easy to get some food from (be it from begging, acting cute or actual thievery!).

While searching for more details about the deer in Miyajima, I came across a number of articles and blog posts about their being in a starved state.  I will grant that many of the deer I encountered on the island did seem to be on the look out for all manner of edibles but I'm not so sure that they're desperately hungry.  Otherwise, instead of just trying to come by easy pickings from among the unknowning tourist population, surely they'd mount aggressive attempts to do such as break into the many stalls and shops selling a variety of foods on the island?

Still protected by Japanese law, a ban was put on feeding the island's deer in 2008.  Despite the protestations of a number of visitors to Miyajima, I'm going to place my faith in the area authorities knowing what they're doing.  At the very least, it's worth remembering that, the deer are indeed wild animals, however tame -- and, yes, cute -- they may appear and should be treated as such as far as it is possible.
Posted by YTSL at 11:59 PM