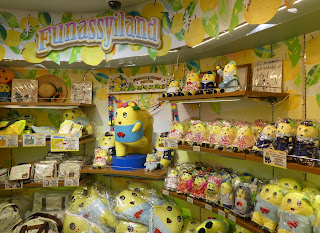 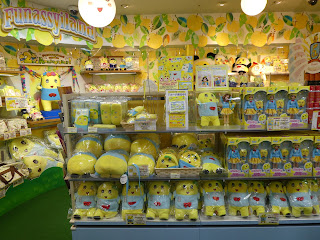 Your eyes do not deceive you -- the Funassyiland Osaka
stock included Funassyi butt-shaped handbags... ;D 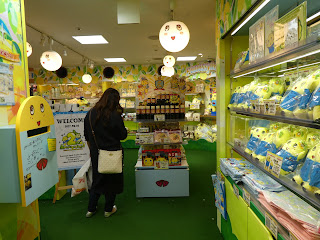 And yes, there's a post box at the store which
can be used to send the Pear postcards and such :)


Even before I set foot in Funassyiland Osaka though, I knew that I absolutely wanted a 2018 desktop calendar since the 2017 desktop calendar has consistently brought smiles to my face since the beginning of the year and viewings of the "making of" videos for the 2018 desktop calendar have got me cackling with laughter at the Pear's imaginative attempts to impersonate historic personalities as diverse as Murasaki Shikibu (the Heian period author of The Tale of Genji), Commodore Matthew Perry and Ludwig von Beethoven!  So it was with much relief as well as happiness that I found that the 2018 calendars were already on sale on my visit.

Of course, the 2018 desktop calendar was far from the only Funassyi item I came away from my visits to Funassyiland Osaka with.  And, actually, Funassyiland Osaka wasn't the only place where I came by items bearing the Pear's visage; with their also being some available at the very cool Tokyu Hands (think Funassyi-themed stationery such as pens and file folders, and also gachapon putitto) and various souvenir shops, including over on Miyajima and in Hiroshima (in the form of Funassyi-themed key chains, charms and handkerchiefs)!

Still, for dedicated Funatomo, the fact of the matter is that it's well nigh unthinkable to not visit a Funassyiland if you're in a city with one of those stores.  Because, if nothing else, you definitely have proof when you're in one of them that there are plenty of other people around who share your passion for the hyper-energetic Pear with a big heart along with jumping ability! :)
Posted by YTSL at 11:53 PM

I confess that I had never before heard of Funassyi! Clearly I am behind the times. This was very entertaining, and I think that I am happier knowing that this character exists. (Certainly, I am at least smiling right now!)

I'm happy to have introduced you to Funassyi, and that you can appreciate the Pear! Do check out the following video clip created by a fan which gives some idea of Funassyi's exploits and evolution over the past few years...