Oh dear re the deer of (and deer mania at) Nara! 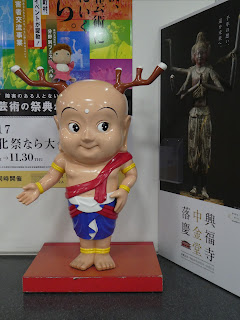 The official mascot of Nara,
Sento-kun... and Puppet Ponyo ;D 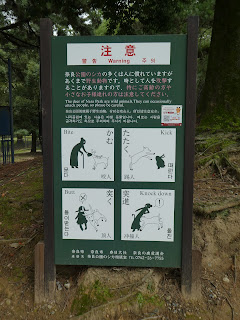 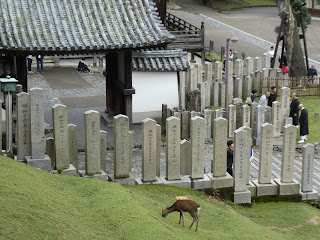 A deceptively serene landscape photograph,
considering that there's a deer in it... ;S


As vivid as my memories of visiting Todaiji were my encountering the deer at Nara Park when I visited the ancient city of Nara back in the fall of 1982.  Back then, I was innocent enough to buy some of those deer crackers sold by vendors; whereupon I got damn near assaulted by a bunch of persistent deer -- none of whom I recall having had the manners to bow to me the way that the deer of Nara are famously able to do.


Expecting to come across though soon after arriving in the city, the way that I had quickly and easily encountered deer seconds after getting out of the ferry terminal at Miyajima, I was initially disappointed that the only "deer" spottings I made were of such as a statue of Sento-kun (the antlered mascot of Nara that Last Week Tonight host John Oliver famously described as looking like the result of "Andre Agassi f**king a reindeer!) at the train station, deer sculptures that were part of an outdoor art exhibition and a deer-themed Daruma doll in a shop window.

But while the deer in Nara do seem to be restricted to a more specific area than over on Miyajima, it's also true enough that once my mother and I got near to Nara Park, we saw a far greater density of deer there than we saw on Miyajima as a whole.


In addition, it really was noticeably the case that the deer at Nara look generally bigger as well as older than the bulk of those that we caught sight of in Miyajima -- and also were far more aggressive in their pursuit of things edible.  In particular, I pity those tourists fooled into buying deer crackers because once the deer discovered that someone was in possession of those, they'd surround the hapless human and effectively hound them into giving those precious edible discs up!


Put another way: hearing individuals screaming while running away from a gaggle of deer is a very common thing in Nara Park and its environs (including the outer sections of Todaiji)!  Even more embarassing must be what those folks tasked with cleaning up a not insubstantial amount of deer poop daily have to do in full view of other people (along with the supposedly divine deer)!

And yes, those deer will go after folks who are not in possession of deer crackers too.  As an example, while standing around waiting for my mother (who had wandered off to another section of Todaiji) at one point, I felt someone nudging me, only to discover upon turning and looking that it was -- but of course -- a deer rather than a fellow human doing so.  And it was only after scurrying about in a wide circle that I managed to get that deer away from me -- or, rather, get it to decide that someone else was an easier "mark" than me! ;S
Posted by YTSL at 10:14 PM

I went to Nara in 2004 for a conference, and I also remember the aggressive deer! My first sighting of them was when several were chasing a young woman, who was running away screaming. It definitely changed my perception of deer!

I don't enjoy going to the petting zoo at our local zoo, for similar reasons. The goats, while very cute, are really pushy if you buy the goat food for them. I prefer to admire them from a distance, without getting punched in the belly by a hoof!

I wanted to wish you a happy blog anniversary! Both of our blogs turn 11 today. I'm so happy to see that you have been continuing to post regularly. (Much more so than me!) Anyhow, I'm so glad that our paths crossed!

We have a lot of deer, which are well adapt to humans. We have what they call white tail. Weigh up to 225 pounds.
Coffee is on

I saw and heard young men as well as women running away screaming from the deer at Nara. They really are agressive creatures!

And happy blog anniversary to you too! You have me beat when it comes to remembering that date! :)

FYI, the deer at Nara (and, for that matter, Miyajima too) are called sika, spotted or Japanese deer. They used to be considered sacred, but not anymore!

Thanks for introducing me to Sento-kun, the antlered mascot who appears slightly impishly anthropomorphic to me. This blog is packed with text and photos that I find interesting on several levels...You've got John Oliver in a hilarious clip, departing from his usual incendiary weekly political comments - to immerse himself in kawaii escapism. My endearing friend Puppet Ponyo looks as if she's having a great time posing atop Sento-kun...

Then, on the right, you have a poster of a classical Hindu sculpture which gives this photo the look of a partially opened triptych in a museum where the curator wanted to mix popular and classical culture.

By the way, I've never eaten deer, but a nutritionist once told me that venison is one of the best sources of lean protein!

I'm glad you enjoy this blog post! A quick correction: I think the image on the poster is actually of a Japanese Buddhist deity -- though there may indeed be a Hindu-Japanese Buddhist overlap there (the way there is a Hindu-Chinese Buddhist one with Hanuman/Sun Wukong). And I've eaten venison but have to say that I didn't care for its taste all that much -- the same with ostrich, another famous source of lean protein!