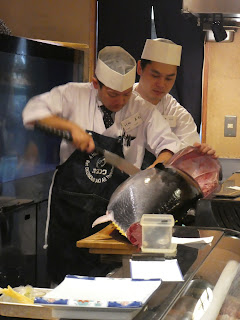 It's not often that you get to see
a whole bluefin tuna getting carved up... 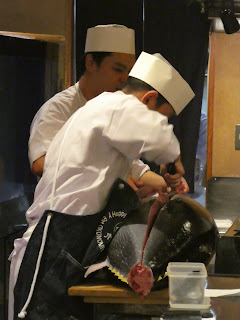 ...but that's exactly what happened at the branch of Sushi Tei
where my mother and I had dinner while in Hiroshima! 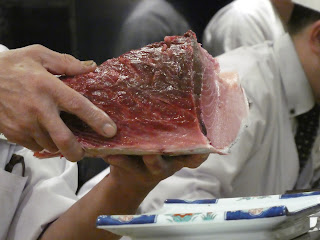 Check out the different gradations of toro (fatty tuna) along with
akami (red meat) visible on this section of maguro (tuna)!
On the same day that my mother and I breakfasted at Jukeiso and had a grilled oyster lunch at Kakiya (and visited Daishoin and made multiple deer spottings in between those two meals), we headed back to Hiroshima from Miyajima via the same combination of ferry and train that had taken us in the opposite direction a day earlier.  Hankering for sushi for dinner, we headed over to the branch of Sushi Tei -- which I've been given to understand is a reputable Hiroshima chain of sushi-ya -- located just a few minutes' walk away from Hiroshima train station and our hotel (which I had picked for its location close to the train station).
I must admit to getting pretty excited when I saw the very reasonable prices on the menu and pretty ecstatic to discover that the food (and house nihonshu) was of a more than acceptable quality.  Indeed, so enjoyable was our meal at Sushi Tei that my mother and I ended up deciding to eat there two nights in a row -- and imagine our delight upon walking into the sushi-ya on the second evening and not only being recognized and greeted enthusiastically by various members of the restaurant staff but to find an actual bluefin tuna carving about to take place!
While I have seen sections of tuna being cut up on visits to Tokyo's Tsukiji market, I've never seen a whole large tuna being effectively dismantled before, and by a trained -- and obviously very skilled -- sushi chef to boot.  Among the things I've long been in awe of when watching well-trained as well as thoroughly experienced sushi chefs at work is how they can make cutting up substantial chunks of fish look like they're slicing through soft butter or even cream.  And this was the case with the chefs I saw at work on the tuna at Sushi Tei, with thick flesh being so smoothly sliced up (rather than sawed through the way one could just imagine of lesser skilled cooks) that the whole process actually looked far more artistic than brutal!
I also appreciated that after the tuna was cut, the restaurant's customers were shown a section of the fish where one could clearly see the different grades of tuna, from akami (red meat) on the outside to the different levels of toro (fatty tuna) at the center.  And lest there be any doubt: at Sushi Tei, one can order four -- actually, maybe even five -- grades of maguro (tuna).  In addition, this sushi-ya also offers more than one grade of a number of other fish (including salmon and yellowtail) to choose from.  And yes, this is something one can expect almost as a matter of course at specialist sushi restaurants in Japan.

Despite having thoroughly indulged myself in the food and drink departments, the total bill for my mother's and my dinner each night was in just the 7,000 Yen (~HK$479 or US$61) range.  While this doesn't qualify as budget fare, trust me when I state that it's a bargain for good sushi -- something was hammered earlier this week when I went for my first sushi meal in Hong Kong post returning from Japan and that set lunch (combined with 230ml of sake) turned out to be more expensive than sushi dinner for two people (and at least 300ml of sake for one person) at Hiroshima's Sushi Tei! ;(
Posted by YTSL at 11:59 PM

Meat cutting takes a lot of time. I've help cut plenty of game meat...Coffee is on

I reckon you'd be surprised how quickly those sushi chefs cut that whole, large tuna! ;b