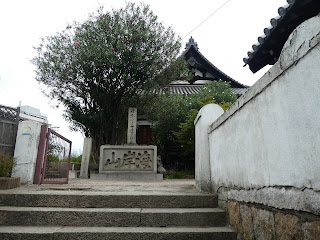 From Fukuzenji, you can get what an 18th century Korean envoy
pronounced to be the greatest view in Japan! 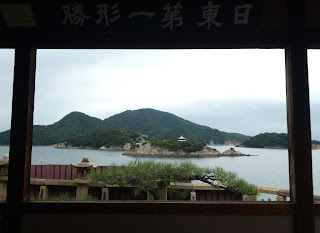 So what do you reckon about said view? ;b 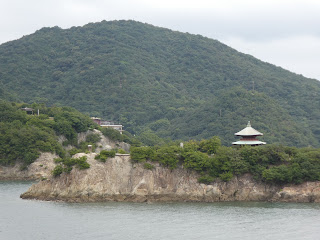 From Fukuzenji, I may have spotted (the inspiration for)
Sosuke's house on the cliff by the sea! :b


While hiking in Hong Kong, I've come to learn of the existence of a number of coastal settlements (such as Lai Chi Wo and Sham Chung) that had their heyday when being situated to water routes were prized rather than a location near a main road or MTR station.  Though nowhere as forlorn feeling or even outright abandoned like some of these Hong Kong coastal locales, the Japanese seaside town of Tomonoura is another of those settlements which has been largely left by the wayside of modern progress.


At the same time, even a short visit to the Seto Inland Sea-side town whose biggest claim to contemporary fame comes by way of its being Ponyo's hometown will get one realizing that there was a time in history when it was far more important than it is now.  For one thing, Tomonoura really does have more than its fair share of historic structures, including centuries-old temples such as Fukuzenji, at the foot of whose hill can be found a stone marker bearing a tanka inscription by Otomo no Tabito, Governor-General of Dazaifu for a few years of the 8th century.


Founded a couple of centuries later, Fukuzenji is too new to have been visited by that 8th century dignitary.  However, this temple went on to host a number of Korean diplomatic missions to Japan during the Edo period; with its Taichoro being used as a guest hall and accomodation on a number of occasions by Joseon Dynasty emissaries on their journeys between their homeland and Edo.


Perhaps clouded by sentiment, a member of the 1711 Korean mission to Edo was moved to proclaim the view from the tatami reception room of Fukuzenji's Taichoro as the greatest in Japan (or, as I've also seen it translated, the most scenic in the East)!  While I have to say that I've seen more beautiful views of even the Seto Inland Sea alone (never mind elsewhere in Japan, etc.) from, say, Kojima's Washu-zan, I am grateful that the proclamation has gone on the record and effectively helped preserve the view in question, which visitors to Fukuzenji can enjoy to this day.


And enjoy that view both my mother and I certainly did -- along with the lovely breeze that blew in from the sea through the open windows into the temple and the wonderfully peaceful, restful feel of the place as a whole.  Making the overall experience even more hypnotic and pleasant was our being able to watch large ships sailing by in the distance, a picturesque ferry plying its route between Tomonoura and the nearby island of Sensuijima, and seagulls and other birds flying about in the sky.

On a visit to Okinawa a few years back, the two friends I was there with and I spent a pleasant few hours one evening kicking back and enjoying the sea views from our hotel room balcony.  And I can easily imagine getting much out of doing something similar if I were booked for a night in a Tomonoura hotel room with a similar balcony like that in Okinawa and view with what's to be had at Fukuzenji's Taichoro. :)
Posted by YTSL at 11:19 PM