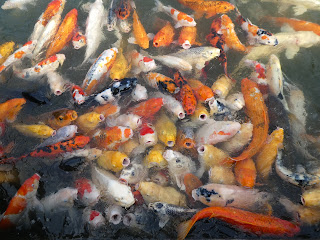 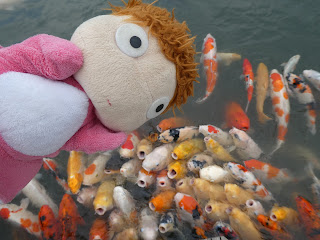 Puppet Ponyo hovering precariously
over an intimidating shoal of fish! 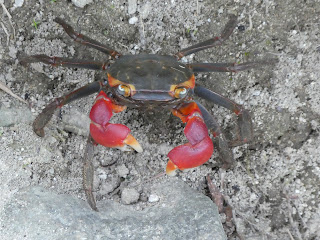 A crab resident of the garden posed for a photo! ;b
Construction on the stroll garden of Shukkeien was begun in 1620 by the then newly appointed ruler of Aki province (as the Hiroshima region was then known).  A small-scale recreation of the West Lake area of Hangzhou, China, this Hiroshima locale's other nods to China include a stone lantern described as being in the style of Yan Kwei Fei on account of its being shaped like the Tang dynasty beauty's crown.
Located in Hiroshima's city center, Shukkeien was declared open to the public in 1940.  After the atomic bomb was dropped at 8.15am on August 5th, 1945, the garden was almost totally levelled but nonetheless was where many people went to seek shelter.  Sadly, many of those who did perished, and their bodies are buried in the garden's grounds.  While walking in Shukkeien, I also came across a memorial stone, flanked on either side by strings of paper cranes and arrangemens of flowers,  erected close to where the remains of an individual who had been in the garden when the atomic bomb was dropped over the city were interred.
Restored and reopened in 1951, Shukkeien is an idyllic locale which offers psychologically rejuvenating strolls through calming greenery and scenic beauty.  The day that I was there, the leaves on the trees in the garden were still predominantly green but enough had turned autumnal red to give me a good idea of how visually splendid the space would be at the height of koyo season in the area.
At the same time, when I walked to the edge of Takuei Pond (which dominates the landscape at Shukkeien), I was treated to flashes of bright color as the water swirled with scores of koi that most definitely appear to be big fans of the carp feed for sale at different parts of the garden for 100 Yen a bag!  With mouths wide open and eyes bulging in anticipation, they actually also can be quite the intimidating sight.  And even while Puppet Ponyo wanted to pose with them, she also had a fear of ending up in the water and being nibbled on by all those hungry (or is it just greedy?) fish!
Other resident at Takuei Pond was at least one fish with what appeared to be a penchant for acrobatics.  While walking near this body of water, one would occasionally hear the sound of splashing.  And when I finally caught sight of what was causing that sound, I could scarcely believe my eyes since it involved a fish propelling itself several inches out of the water not just once but a number of times in the space of just a few minutes!
All in all, I'm not sure which was the more surprising critter spotting: that jumping fish or the small crabs that have made their homes in holes of tree trunks in several parts of the garden!  I'm not sure if those crustaceans migrated to Shukkeien from the nearby river or were brought by human hands to become residents of this garden.  But together with the butterflies, dragonflies, other flying insects and fish as well as flora I found within its grounds, those crabs I spotted helped me to come away from a visit to a once decimated but now rejuvenated space feeling like I had been in a place that was full of life, and feeling happily alive.  :)
Posted by YTSL at 11:08 PM